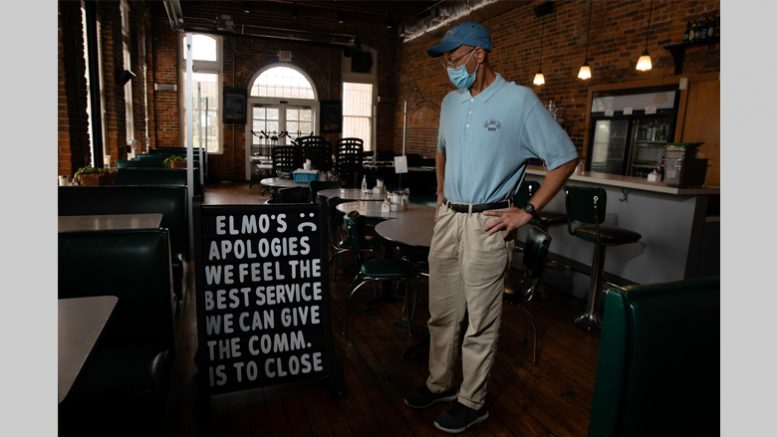 If you ate at Elmo’s Diner in Carrboro over its 29-year run, thank kitchen manager Charles “Chuck” Mills: he made your day better.

He started in 1995 as a dishwasher, then became a prep-cook, square-meals cook, cleaned, handled deliveries: anything that needed help in the tiny kitchen inside Carr Mill Mall, he did.

Now, two weeks after the downtown institution announced its permanent closure because of the coronavirus pandemic, Mills and some of the diner’s regulars are still feeling the loss.

“We’ve been around so long that we were literally the hub of the Carrboro dining scene,” Mills said, recalling that when Elmo’s opened in 1991 there were few restaurants in downtown Carrboro. “We definitely became ingrained in the community, and I could see it. Every time I would talk to someone, they’d ask me where I worked, and I would say Elmo’s, and they’ll go, ‘Oh Elmo’s,’ and they would start telling me some Elmo’s story.”

One of them was Sherri Ontjes, the former owner of Carrboro’s N.C. Crafts Gallery, who went to Elmo’s every day for the past 15-plus years.

“I’d be 82 this year,” Ontjes said, “and I live by myself. It was very important to me to talk to someone first thing in the morning — not just get up and face another day.

“So, the young people who worked at Elmo’s, and that included Chuck and his kitchen crew, were wonderful. I enjoyed them so much. They were nice to be with and always had something to talk about. And I often gave them crossword puzzles to do, or we could talk about what was going on in town or the country. It was just a wonderful way to start the day.”

After resting for a couple weeks after Elmo’s closed down, Mills picked up a job at the Harris Teeter in the same shopping plaza. But the diner remains a part of him because so many memorable life moments happened while he worked there.

“I remember the O.J. Simpson verdict came down which was like the big news day of the time,” Mills said.

He wishes, now, that he had done more to keep that little kitchen going.

“You feel like you let everybody down,” Mills said. “A part of me still feels like I should have come up with a way to keep things going, to give [his co-workers] a paycheck, to give them a job, but I just wasn’t able to ­— I couldn’t — and I feel bad about it.”

Mills said he has been in conversation with Elmo’s owners about somehow getting back together to “recreate some of the magic.’

But it won’t be another Elmo’s, Mills acknowledged.

Which is a problem for Ontjes.

“How could [Elmo’s] do this?” she asked. “My last few years of my life — very selfish — but you do tend to think that way when you think something is going to last forever: [last] as long as you do. And that you can die before they do. And then, it’s not true.”

2 Comments on "Leftover Memories of Elmo’s"