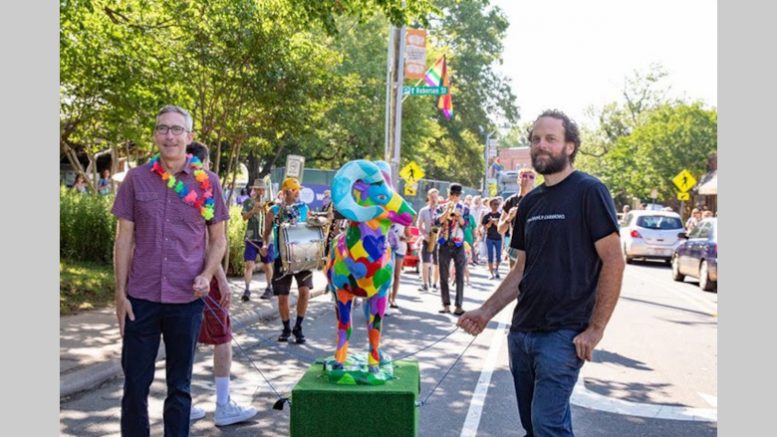 LGBT Pride Month occurs in the United States to commemorate the Stonewall riots, which occurred at the end of June 1969. As a result, many pride events are held during this month to recognize the impact LGBT people have had in the world.

Leaders and influencers who lived the history of LGBTQ rights in Chapel Hill, and surrounding Orange County towns such as Carrboro and Hillsborough, are on the forefront of progressive, inclusive thinking. Leaders welcome visitors to experience all Orange County has to offer during the month of June — or anytime. “I’ve had friends from out of state joke that I live in ‘Appalachia’,” notes Hillsborough resident Steven Petrow, Washington Post columnist and author of the new book, Stupid Things I Won’t Do When I Get Old. “Of course, once they visit, they realize they’re 100 percent wrong. Orange County is home to James Beard Award-winning restaurants. UNC, the oldest public university in the U.S. is here, and we’re home to many of this country’s best writers — Allan Gurganus, Lee Smith, Daniel Wallace, Jill McCorkle, and so many more. This is a place where, as a queer man, I feel perfectly at home. That’s true equality.” A History of Gay and Lesbian Leadership The Chapel Hill area has a long history of electing openly gay and lesbian officials, beginning in 1987 with Chapel Hill Town Council Member Joe Herzenberg. After his appointment in 1979, Joe Herzenberg ran for the seat in 1981 and lost, then he ran in 1985 and lost again. By the time of his final re-election in 1991, Herzenberg received the highest number of votes ever as a candidate for local office in Chapel Hill. Herzenberg helped accomplish a good deal including a shelter for the homeless, a new public library, a downtown parking garage and plaza, important additions to the town’s greenway system, an AIDS house, and new legislation in several areas including tree protections and noise abatement.

Mike Nelson, the first openly gay candidate elected mayor in North Carolina, led the town of Carrboro from 1995 to 2004, and Orange County is currently home to half of the state’s gay and lesbian elected officials.

“I always feel welcome anywhere I go in Carrboro or Chapel Hill — and this was the case before I became mayor! — and able to talk openly about my family and my life,” Nelson says. “This is not the case in many communities, and we recognize that we are so fortunate to feel so welcome and a part of the community here.” Earlier this year, all local governing boards in Orange County’s communities voted to pass an ordinance broadly protecting members of the LGBTQ community from discrimination. A key champion of the legislation was Carrboro Mayor Lydia Lavelle, the state’s first openly lesbian mayor. “Our community has a long-standing reputation as the most welcoming place in the state for the LGBT community,” she says.

Mayor Lavelle also spoke out against recent legislation that would bar transgender children and young adults from participating on women’s sports teams in school. The House speaker dropped the proposed legislation after a public outcry.

“Like all critical issues in front of the General Assembly, once again our LGBTQ community made its voice heard, working to remind state leaders that everyone deserves respect, dignity, and equality,” said Carrboro Mayor Lydia Lavelle. Mayor Lavelle and her wife, Alicia Stemper, were the first gay couple to receive a marriage certificate in Orange County, after having two previous ceremonies of union prior to the legalization of gay marriage in North Carolina. Theirs was only one of a number of partnerships recognized, however. Damon Seils, a Carrboro Councilman who just declared his candidacy for Mayor of Carrboro, explains that Carrboro has the oldest domestic partner registry in North Carolina. “We declared October 10 to be Marriage Equality Day in celebration of the October 10, 2014, court decisions that brought marriage equality to North Carolina,” he said. Chapel Hill also has a registry.

Whether you’re ambling along our scenic downtown streets or rambling through the wooded hills, you’ll find yourself in a unique Southern community. “It epitomizes ‘The New South’,” says Jen Jones, former director of communications for EqualityNC. “It’s a place of the future that welcomes diversity, embraces inclusivity, and is a gateway for native Tar Heels, wayward travelers, and new transplants alike. Chapel Hill-Carrboro remains one of the most LGBTQ-friendly areas in North Carolina and across the South.” Small Town Pride will be Celebrated this Year

Carrboro and Chapel Hill celebrate LGBTQ+ Pride Month through a mix of in-person and virtual events, Small Town Pride will involve the entire community, with local businesses, artists, volunteers and community partners. Everyone is welcome!