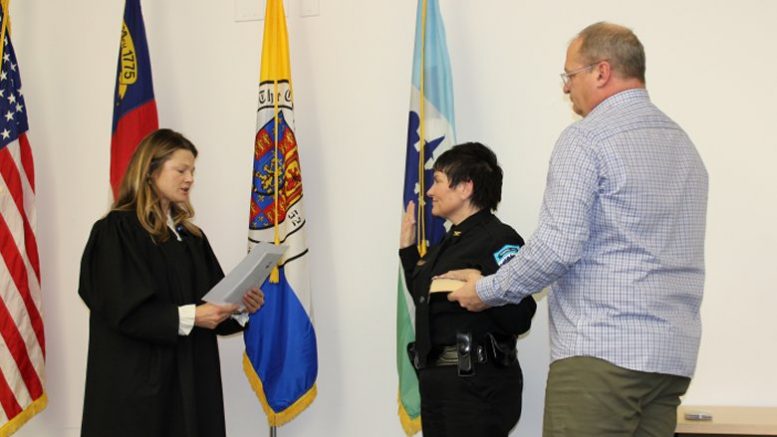 Chief Celisa Lehew takes her oath of office, administered by Chief District Court Judge Samantha Cabe (Judicial District 15B, Orange and Chatham counties), as her husband, Steve Lehew, holds the Bible for the ceremony. She takes her place as the 19th chief of the Chapel Hill Police Department (CHPD) and the first woman to serve in the position. Photo by Michelle Cassell.

It was standing-room only in the Chapel Hill Public Library’s Room B on Tuesday afternoon as Assistant Chief Celisa Lehew was sworn in as the 19th chief of the Chapel Hill Police Department (CHPD), making her the first woman to hold the position and adding to an elite group of women who make up only 8.3 % of all police chiefs in the United States.

Lehew has been working toward becoming chief for 19 years, starting with her first assignment as a patrol officer in 2004.

“I love this department and community. I sought CHPD out 19 years ago for its progressive and forward-thinking policing, inclusivity culture, diversity and university relations,” Lehew said.

She takes over the reins of leadership from the former chief, Chris Blue, who retired from the force at the end of 2022 and then became the interim Chapel Hill town manager on Jan. 1 after the resignation of Maurice Jones Dec. 13, effective Dec. 31. “This is a joyous day, and I am honored to be part of Celisa’s rightful ascension to this,” said Blue. “It was a foregone conclusion early in her career that her ultimate destination in the policing world was to be a chief.”

Lehew was chosen through a process that included a national search.

Blue continued with accolades, saying, “Whether serving as a patrol supervisor, as leader of our traffic unit or the investigative division, she brings excellence to every assignment. She is focused and has compassion and determination. She has all of the characteristics of a successful leader. I have had countless opportunities to see her in action, and I can tell you folks that we are in very good hands.” Councilmember Camille Berry delivers remarks on behalf of the Town of Chapel Hill Council and Mayor Pam Hemminger at the swearing-in of Police Chief Celisa Lehew on Tuesday. Photo by Michelle Cassell.

Remarks from Councilmember Camille Berry preceded Lehew’s oath of office. Councilmember Berry, speaking on behalf of the Town, emphasized the trust the Town was placing in Lehew.

“Mayor Hemminger and the rest of the council are excited about the role you are entrusted with and we believe you can carry out,” said Berry.

Berry added, as several others did in their remarks, that it is Lehew’s warm smile that she would always remember.

Orange County Criminal Justice Resource Director Caitlin Fenhagen, said, “I am honored to say a few words about Chief Lehew on this momentous day, and we are all proud to have our first female chief of police in Chapel Hill.”

Commenting on CHPD’s reputation as one of the top police forces in the country, Fenhagen said of Lehew, “She will lead us to even more state and national recognition. And her commitment to diversity and equity in hiring does not end with her position. Nationally, only 13% of all law enforcement officers are female and only 8% of all these chiefs are women.”

The 30×30 Initiative is something Fenhagen stated that Lehew strongly supports. “She aspires to increase the representation of women in police recruiting classes by 30% by the year 2030,” said Fenhagen.

Fenhagen recounted the feelings of the other speakers on the generosity and humanitarian efforts Lehew has exhibited to help the unsheltered, although it was not part of her job.

“When we knew the recent cold weather was arriving and resources to house and protect them were needed, she and the Crisis Unit Patrol continued in their outreach and provided transportation and shelter in available hotel rooms during the six days of freezing temperatures,” said Fenhagen.

That is not where the story ended. According to Fenhagen, Lehew and her daughters picked up and took food to the people sheltered in the hotels. Robert Campbell—or, Brother Campbell, as he prefers to be called—a well-known Black minister and president of the Rogers-Eubanks Neighborhood Association (RENA), started his tribute with a booming revival-style question: “Can you say her name?” The audience responded, and he asked it again—this time receiving a resounding “Chief Lehew” in reply.

“She (Lehew), out of her humanity, has implemented so many programs. I remember when the hurricane came through and residents down east needed supplies. She helped us organize transportation and storage space to collect those items. She organized cadets to help us load packages and provided instruction during our food drive,” said Campbell.

“As I serve on the Justice in Action Committee in Chapel Hill, I witnessed her direct our vision to bring leadership development with equity and diversity suggestions,” said Campbell. “If you take a snapshot of where we are and who we tend, this is what diversity looks like. This is what we are moving into the future.”

Commenting on her never-ending smile, he said, “I have never seen her without one on her face. If you want friends, you have to show yourself to be friends. It is all wrapped up in our new chief,” Campbell concluded.

“It is especially an honor for me to swear in the leader of leaders who is also a friend of mine that I have known for 23 years,” Cabe said.

Lehew’s goals for the future

After taking the oath with her husband, Steve Lehew, by her side, Lehew expressed thanks to family, friends and peers who came to support her.

“Thank you all for your love and unconditional support and for always cheering me on to show the world what I’m made of,” said Lehew.

Lehew said she chose Chapel Hill to pursue her law enforcement career based on her values and passion for a community where she knew she could impact the law enforcement profession, noting, “I am as passionate today as the day I walked in the front door of the department.”

Looking forward, Lehew promised to lead with “an open heart and mind.”

“I am intentional about leading from the front with respect, trust and a sense of community … we will together continue to shape the direction of the department and my door is always open. I look forward to community partnerships and conversations,” she said.

Lehew then took out her cell phone and asked the audience to take out theirs. “I’m leaving you with my cell phone number. Call me anytime. I will always respond even if I’m not available at that moment.” She accepted a round of applause with the signature smile so often noted.

A  reception was held on the library patio.