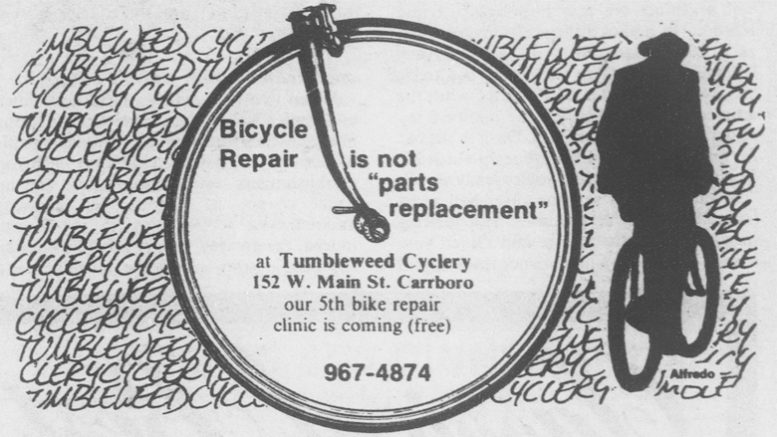 A 1976 Ad for Tumbleweed Cyclery

I was about 10 years old in 1977 when I got my first “real” bicycle, a 10-speed racer made in Europe by Puch, a now long-defunct brand. Here in Chapel Hill and Carrboro there was one place to get that type of bike — the area’s premier shop, Tumbleweed Cyclery.

This iconic bike shop was located at 152 East Main in Carrboro right down from the Western Auto store at the intersection of Weaver and Main (it moved to Chapel Hill at 456 West Franklin in later years). The space was next to the present-day Armadillo Grill and has been occupied by a variety of businesses since.

Polished wood floors that creaked with each step greeted customers entering the main doors. After you took the two steps up into the store between large front windows, inside to the left were beautiful double-height custom wooden racks holding some of the nicest bicycles available at the time. A long dark wood counter with a glass front to display high-end Italian bicycle components — then almost exclusively from a company called Campagnolo — and an ancient brass cash register completed the sales area.

An elevated piece of rope ran diagonally across the back part of the shop with Tumbleweed’s mascot, a small toy man riding a bicycle, balanced and riding along the line when someone pulled on one end. We called him “Alfredo” after Alfredo Binda, a towering Italian cycling champion in the early 1900s who in later years famously lent his name to a brand of toeclip strap.

An extensive repair bay dominated the rear of the store along with an entry onto the dirt parking lot out back where bikes needing work arrived regularly from families, students and a growing group of enthusiast racers. The folks running the place seemed well on in years to me at the time, but in reality were a group of younger bicycle mechanics with experience and enthusiasm unmatched in the area. That Puch bicycle purchase sparked a love of riding in me that I’ve been able to sustain to the present day. As I rode over the next few years, I began to be a regular in the shop, getting to know the mechanics and other assorted characters from town who become frequent customers of any such institution.

This was a good thing, because my home life was pretty unsettled as a teenager and having some stable role models who didn’t think my new obsession with riding bikes was completely nuts meant a great deal to me at the time. Pretty soon I was being allowed to fix the odd flat tire or two for a customer and occasionally work on lower-end bikes so far gone they were usually hauled to the shop for repair in someone’s trunk.

As the low guy on the totem pole, I was also sent down the street on the “shop bike,” an ancient three-speed English contraption that must have weighed 70 pounds, to Chapel Hill’s Italian Pizzeria. There I would pick up the lunchtime pizza, strap it to the rack, and bring it back with extreme care. For me, there was nothing like sitting in one of the front windows of the shop where we had put a table and eating hot Sicilian pizza while talking the finer points of riding a bicycle “all the way to Raleigh” — and back.

One of the mechanics there, Michael Gleason, would eventually become an owner of the shop and was on his way to becoming a well-known and respected cyclist and craftsman. He saw his role not just as a local business person but also as a booster for bicycles and the sport in general. Lucky for me, he also took on the responsibility of instructing a few younger kids interested in bikes in the finer points of repairs and the art of riding. The Author’s M-Cycle, Built by Michael Gleason in the 1980s in Chapel Hill

I learned a great deal from Michael over the years, but one of the first lessons I learned was appreciation and respect for craft, skill and artisanship. At the time, Michael was beginning to build custom frames and bicycles and had just established a frame shop in a small cinderblock building in the rear parking lot behind Tumbleweed that currently houses Tom Robinson’s Seafood.

When he wasn’t working on deadline, he was often willing to demonstrate and sometimes teach the basics of transforming plain metal tubing into a beautiful, light racing bike. One high point for me I remember vividly was learning how to use the sandblasting box to strip the paint from an old frame of mine down to burnished metal in preparation for building up a new bike. As the old paint came away under the nozzle of abrasive sand, the revelation of the beautiful, smooth hand brazing (welding) that held the frame tubes together was revealed.

When you begin to understand the work and skill to create something both beautiful and functional, you develop an appreciation not just for the object created but also for the people bringing something new into the world. That’s just as true today as it was when I learned this back when I was still nailing the cleats onto the bottoms of my wooden-soled cycling shoes (and yes, bicycle racers still did that in the early 1980s believe it or not.)

While I didn’t end up becoming a partner in the bike shop, but instead decided to work in law and public health, I have never lost that appreciation for those whose dexterity and patience allows them to create.

Today I’m lucky to count among my friends jewelers, writers and builders of wooden boats. Technology allows for wonderful innovation, especially in cycling, but we lose something that is central to our existence if we ignore the beauty of local, individual craft and creation. Hopefully, we never will. The Why of BMX