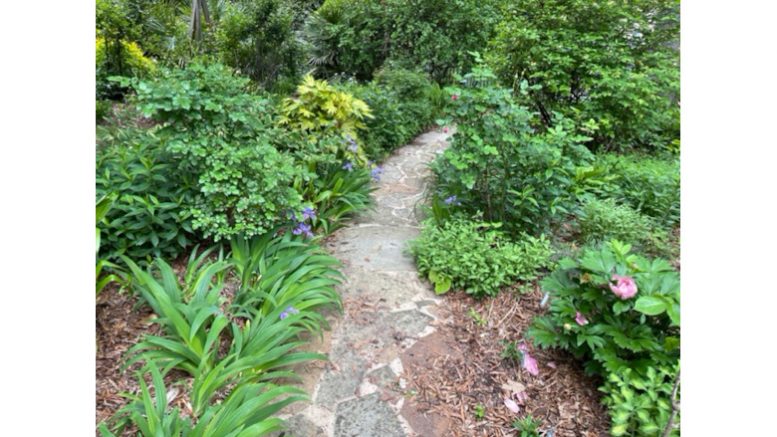 Space visible in the perennial borders. Photo by Kit Flynn.

HOW DOES YOU GARDEN GROW?

Food and fashion pornographies are barely tolerable but I put my foot down when it comes to viewing the garden pornography displayed in magazines. Think about it: The food that tempts us in magazines has been sprayed and colored within an inch of its life until it’s inedible. Fashion magazines sculpt their models’ faces – and figures – until they are practically unrecognizable.

Equally, the scenes we view in garden magazines are totally unrealistic. Where are the inevitable spaces in the perennial border? Where are the flopping plants? Where are the weeds? Where is that garden thug that becomes inevitably too much of a good thing? Where are the everyday problems with which we deal?

Now, I’m not discussing professional gardens. Just wander around the Sarah P. Duke Gardens and you’ll quickly appreciate the miracle that its army of curators and volunteers have wrought. Rather, I am referring to our own gardens, the ones we have at home – not the ones where the owners are happily weeding in pristine white pants for that magazine photo.

I know what I’m talking about because in 2005 my garden was televised for a garden series that no longer airs: We used every trick in the book to ensure that the garden looked as though it belonged to a nice family. Hidden pots filled with new plants filled the empty spaces. While I always keep up with the weeding (I’m a nerdy weeder), we ruthlessly weeded every inch, tearing out plants along the way that weren’t living up to expectations. In other words, we were creating the illusion of what my garden should look like, not how it normally appeared.

Flopping plants are the bane of my gardening existence. When the staking genes were passed out, I was somehow overlooked. There are some plants that I provide with an attractive trellis backbone, such as my roses, but generally through trial and error I ineptly try to stake those plants that decide in July that they cannot stand up on their own.

A good rain pelting down will inevitably produce a good deal of flopping. When this happens, I have two choices: I can either cut back the plant (frequently losing that part of the bloom cycle) or laboriously – and inadequately – try to tie up the offending branches into an untidy mess. I try to remember to prop up my lilies before they need it, although every year I have hopes that this year the lily stems are sturdy enough to hold those heavy blooms upright. Starting in the middle of May, deadheading becomes a daily chore. Daylily flowers last for one day before producing unattractive seedheads. Rose blooms fade. Plants demonstrate their desire to produce seeds whereas I’m after more flowers. Crinums bloom for a long period while producing their share of dead blooms and unattractive stalks.

The truth is that garden magazines don’t show the flops or the dead blooms. They are producing gardens that are just about as unreal as my garden was for its television debut.

The simple fact is that all home gardens have attractive and not-so-attractive moments during the gardening season – and at most times they consist of a combination of these two factors.

Have you noticed that the lavenders in these photos are never woody or gawky? The herbaceous peonies never go through the I-just-gave-birth phase after bloom time when the reality is that ours look ready for a hospital stay. So many rose pictures show flowers with enchanting droplets of water on them but where are those roses whose flowers ball up due to a rain shower? Am I the only one who has managed to plant a pair of shrubs too close together so that in adulthood they are crowding one another out?

What I would like these photographers, writers, and gardeners to do is to explain their gardening mistakes. I learn far more about my gardening when coping with my mistakes. We’ve all taken out plants simply because we didn’t like them or sited them incorrectly. We’ve mistakenly planted thugs only to spend vast hours ripping them out. A hopeful weed growing among the Japanese roof irises and bletilla. Photo by Kit Flynn.

Where are those empty spaces we all must cater to while waiting for perennials to grow to their designated widths? Perennial borders change simply because the garden changes. Change is inevitable in the garden as aging gardens settle into more shade than when younger. Shade plants are frequently the appropriate substitutes for the original sun plants that are underperforming due to the changing landscape.

So, my advice is this: When you are looking at garden photographs, recognize that you are viewing something that is just as unreal as the food pictured in magazines and as the models from the land of make believe advertising the latest makeup. Someday, maybe these models will develop hips and garden photographs will depict some of the flaws we’re all so familiar with.