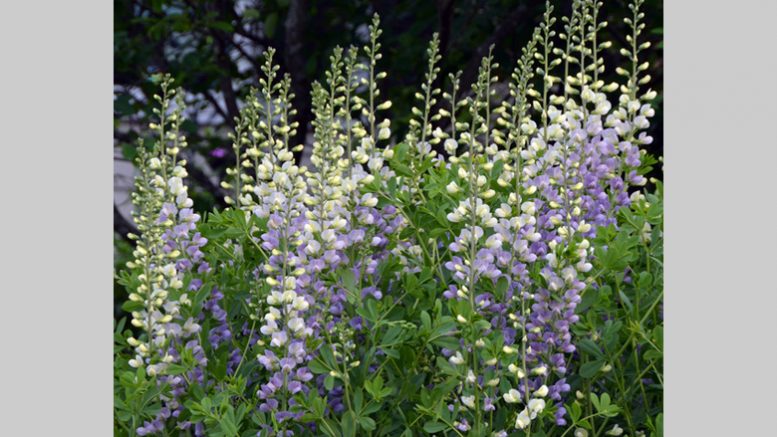 I’d never thought much about Baptisia until recently. For some unaccountable reason, this genus has been much on my mind. Perhaps it’s because I vaguely feel guilty about not having incorporated more native plants in my garden —but the more likely reason is that I have cleared out some spaces in the perennial garden and now feel a pressing urge to fill them.

The only things that I knew about Baptisia, aka False Indigo, is that it spends an incredibly long time establishing a taproot before concentrating on its appearance and I once mistook the emerging shoots for asparagus. Considering I have never planted asparagus, I’m sure you would agree that this was a case of impending old age. All 15 species of Baptisia are native to regions east of the Rockies, even B. australis is a native species, even though it sounds as though it’s Australian. Before entering a long period of being ignored, baptisias originally provided indigo dyes for Native Americans. However, since 1996 — when the first hybrid, B. Purple Smoke — appeared in nurseries, baptisias have begun inhabiting our gardens.

Carolina Moonlight, a seedling discovered at the North Carolina Botanical Garden, quickly followed. Today, we have an abundance of hybrids.

This long-lived plant dies back every fall, only to reappear in early May. The flowers, if pollinated, produce attractive fruits. This is not considered a weedy plant so it is possible to enjoy the attractive seed pods.

Around 10 years ago, because these plants are pretty much deer proof, I planted various baptisias around the garden. I hadn’t considered that baptisias vary in height from 1½ -5 feet when I planted them. While 1½ feet is a plant, 5 feet is almost a shrub. Another disappointing factor in my baptisia experience was that several of the cultivars flopped after a good rain, a look I personally dislike.

So, which cultivar should we choose for our gardens?

Fortunately, we have a research report from Mt. Cuba Center near at hand: mtcubacenter.org/trials/baptisia. Researching which baptisias to plant is important for the simple reason that there are a lot of differences among the cultivars. They not only come in varying heights, they also come in a vast assortment of colors and it’s probably best to avoid the flopping cultivars.

Baptisia foliage typically remains fresh and clean looking throughout the growing season while the seed pods are highly recommended for use in floral arrangements. One mistake to avoid is to amass several baptisias together — crush that urge before it grows. The plants look better as single specimens while those amassed simply become a blur of small leaves.

Their principal requirement is full sun so plant them in the sunny perennial border. They can tolerate lots of different types of soil, but due to their long taproot, they do not transplant well. They also take more time to establish than many perennials, as the first years are concentrated on expanding that taproot. As a gardener, considering it takes three to four years for a baptisia to reach its full size, you need patience and time.

After careful consideration, I have determined that my garden needs B. sphaerocarpa Screamin’ Yellow. Not only was it the highest-rated baptisia, it also can put out 350 inflorescences on a single mature plant. It’s medium-sized and, best of all, it doesn’t flop. Now I will have to find a nursery that carries it, another research project.

Who said gardening was easy?

Aging in Place in the Garden

Be the first to comment on "Let’s Talk About Baptisia"