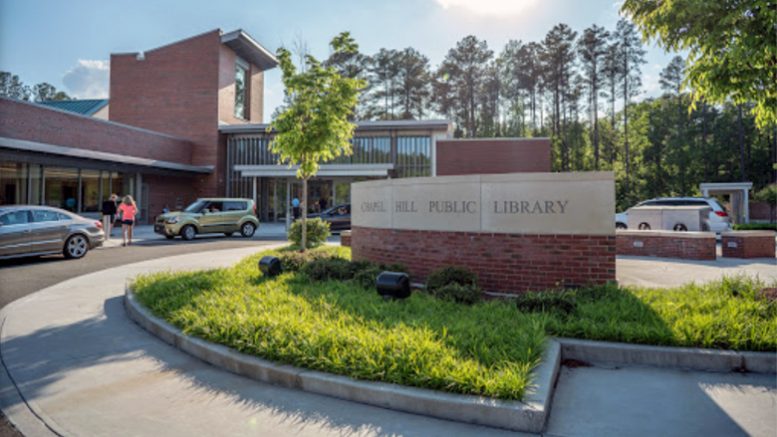 The Chapel Hill Public Library dodged a bullet when a budget amendment proposed by Orange County Commissioner Chair Penny Rich to cut $568,139 in county funding to the library failed by a 2-5 vote.

Rich and Commissioner Mark Marcoplos voted in favor of redirecting $500,000 to create an education fund controlled by the county, and holding the remaining $68,139 in case Chapel Hill decides to charge county residents who live outside town limits a fee to obtain a library card. Commissioners Jamezetta Bedford, Mark Dorosin, Sally Greene, Earl McKee and Renee Price voted against the funding cut.

Rich pitched her idea of a county-run education fund as a way to mitigate a potential widening of the opportunity gap between white and minority students while classes are held online. Broadband internet access is not available in some rural areas. (McKee had to log into the commissioners’ Zoom meeting from the Whitted Building where the board holds in-person meetings because he does not have broadband service at his home.)

But Price objected to diverting money from the library, given that libraries offer free educational programs and materials to all and led the way in desegregating before schools did.

“Equity happens in the library,” Price said. “Libraries here were the first step to desegregating society.”

The lack of broadband internet access in some rural areas became an issue when public schools switched to online classes due to the COVID-19 pandemic. Orange County Schools have spent some $42,000 to mail materials to students who can’t log in to online classes. Around the same time, Rich discovered that an agreement between the county and town to contribute funding to the library had expired.

In 2012, the county and town signed an inter-local agreement that set the amount the county was to contribute to the town library. Shortly before the agreement expired in 2015, a committee of some county commissioners, town council members and county and town staff met to discuss renewing the agreement but lacked consensus to move forward, said county manager Bonnie Hammersley. The county and town managers agreed to keep the 2015 amount in their respective budgets until a new formula could be worked out.

Last October, the town indicated it would like the county to increase library funding. In December, the library’s advisory board brainstormed some ideas for a model to be used to calculate appropriate funding from the county. All models resulted in the county increasing its contribution, ranging from doubling to tripling the current amount.

The county asked for a delay in the discussions to study how a new library in Carrboro would affect use of the Chapel Hill library by Orange County residents who don’t live in Chapel Hill. When Rich looked into the existing agreement, she also noticed that the town had a much larger fund balance than the county’s. Fund balance is the difference between a government’s financial resources and what it owes in the short term. Rich advocated for the county to save its fund balance for county-specific emergencies.

In a letter to Chapel Hill Town Manager Maurice Jones, library director Susan Brown said that operating the library costs nearly $3.1 million. As much as 80 percent comes out of the town budget, and the remainder is paid for by the county, federal and state grants, and gifts from the library foundation. If the funding cut were to go through, she wrote, the library might have to eliminate staff, reduce programing and quash a proposal to eliminate fines.

“The loss of $568,000 in the library budget at this late date would have resulted in the town considering implementing member fees for non-Chapel Hill residents while also reducing the services we offer,” Jones said.

Bedford, former chair of the Chapel Hill-Carrboro City Schools board, said that Orange County Schools expect to receive nearly $1 million in CARES Act funds to be used to offset expenses necessitated by the pandemic. If Rich envisioned her education fund to go toward extending broadband infrastructure to rural areas, $500,000 would not go far, she said.

Several commissioners agreed that with the prospect of a new library opening in Carrboro in the next couple of years, it was important that towns and county staff and elected officials communicate about funding issues. And with another interruption of in-person classes expected in late fall due to a projected second wave of COVID-19, commissioners need to pursue a realistic, affordable solution to extending access to broadband internet service to all county residents.

Be the first to comment on "Library Dodges a Funding Cut"