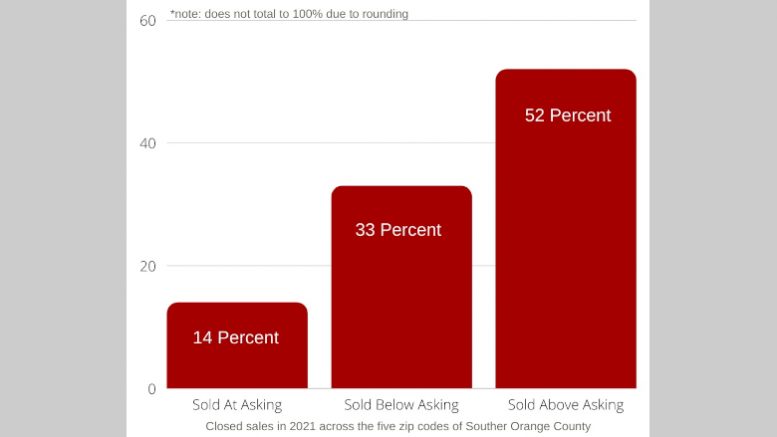 You have probably heard that the housing market is very competitive this year. Maybe you know someone who has been looking for a new home who has been outbid. Perhaps you heard that your neighbor’s home sold for well above asking price. Possibly you have seen articles about people moving from other states with a lot of equity that allows them to pay all cash, driving up prices.

One ZIP code (27514) actually had an average sale price that was lower than the average list price and one ZIP code (27707) had no sales during the time period studied.

A total of 369 home sales have closed in southern Orange County this year. The average list price of those sold homes across all ZIP codes was $480,099, whereas the average sale price was $486,396. So, at the coarsest level of analysis, there does seem to be a trend for buyers to pay above the list price, though the average overpayment amounts to only about 1.3 percent of the list price.

However, this high-level view does not tell the whole story.

These are the kind of figures that drive the narratives that we hear about the housing market. The stories are not false — it is a hectic time to be a buyer — and these transactions no doubt stung for those in the bidding war. However, we should acknowledge that the $50,000+ group represents only about 10 percent of homes sold.

In fact, it is important to note that, unbelievable though it may seem to those looking to buy, nearly half the homes sold this year within these ZIP codes have sold at or below list price.

Additionally, a surprising 122 of the homes sold so far this year within these ZIP codes have actually sold for less than the asking price. That is to say, a full third of all homes sold in southern Orange County so far this year have sold under the list price.

This certainly runs counter to the primary narrative about home sales for the year. The average sale price among these homes was $535,936, with a high of $1,850,000 and low of $60,000. While the homes in this group generally were priced higher than those in the other two groups, the range again shows prices were varied across the spectrum.

While the story of the year has certainly been one of low inventory and bidding wars, this analysis shows that the dynamics of the local housing market so far this year are more complex than this popular narrative would suggest.

Gary A. Miller is co-owner of Red Bloom Realty. He has lived and worked in Chapel Hill off and on since 1994 and is an avid musician, kayaker, traveler and former educator.

A Look at Condos and Townhomes in Southern Orange County