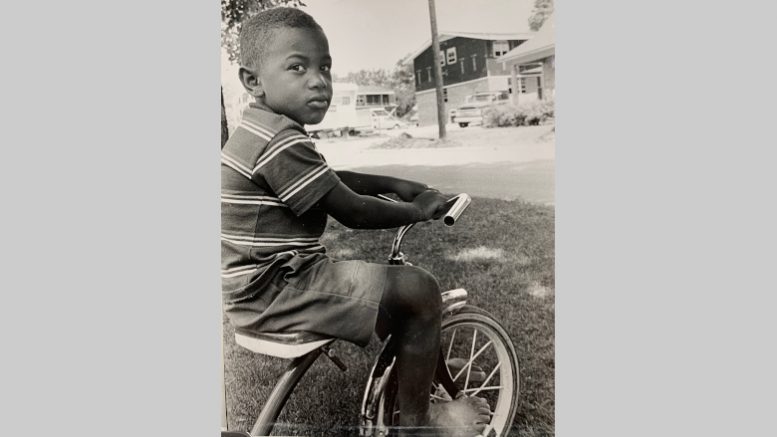 The young boy sits astride his tricycle like a judge holding court. Barefoot, he affixes the photographer with an intelligent, penetrating gaze. Maybe he is thinking: Why is this white man in my neighborhood taking pictures?

It was 1967, and I was working as a photographer/reporter for the iconic Jim Shumaker at The Chapel Hill Weekly (arguably the finest community paper in the South in the ‘60s). “Shu” sent me to visually document the substandard housing and living conditions in the historically Black neighborhoods of Chapel Hill, places with names unfamiliar to the predominantly white readers of The Weekly — Pine Knolls, Tin Top, Sunset, Potter’s Field.

Because, 54 years ago, people who looked like me rarely frequented these neighborhoods, editor Shu afforded his photographer an escort in the form of the town planner, driving an official Town of Chapel Hill car. We stuck out like the proverbial sore thumb. It thus felt more like a safari than a neighborhood tour. I remember wishing, at the time, it had just been me on my bike.

My photos were subsequently published, June 16, 1967, in The Weekly with text by W.H. “Bill” Scarborough under the headline “A Hard Look at Northside’s Problems.”

Scarborough, a hard-bitten, no-nonsense veteran reporter, wrote, “In a town of sharply divided neighborhoods such as Chapel Hill, Northside has gone almost unnoticed. Few townsmen who don’t live there know it exists. But Northside is becoming visible …. [I]t has come to public attention because of controversy …. [C]hange gnaws at Northside in spots. At the corner of Gomains Avenue and Sykes Street, a pioneer public housing is going up. Over the years, a few of the streets have been paved. … Even with its new visibility, Northside will be slow to change. As one resident put it when he was asked if he would permit his photograph to be taken, ‘I’ve been here 68 years. Why now?’”

The mid ‘60s were tumultuous times in Chapel Hill, as they were across much of the South. As such, it was a great time for a young man to be a fledgling photojournalist.

I look back on these photos and cringe.

Was I not guilty of practicing “parachute journalism?” This is the very sort of angst-pandering journalism I have railed against in my local reporting/community journalism classes. It’s a total set-up, in which, to get the dramatic shot, the celebrity reporter grandstands in front of the (pick one of the following) burning house, tornado-ravaged town, hurricane surf. Then, he/she jets back to the safe warm studio in NYC, leaving the locals to cope with the aftermath.

And was I not guilty of also practicing “extractive journalism,” in which I used the local people almost like stage props to make my images more interesting? Here are their faces, but who are they? And what are their stories? It has dogged me for years that I failed to get names, places and human narratives when I made these images.

Fast forward 54 years: Helping to right these wrongs is Danita Mason-Hogans, who has offered to help me fill in the blanks.

Danita, whose local roots go back seven generations, is the daughter of my pal and Chapel Hill Nine hero Dave Mason Jr. She works at the Center for Documentary Studies at Duke, is the program manager for the Critical Oral Histories program, and hosts the podcast “Re/Collecting Chapel Hill.” Additionally, she helped lead the creation of the new digital exhibit at our public library, “I Was Still Singing,” which offers perspectives of Black women who have influenced local history.

I couldn’t have found a better helpmate. A second photograph from that 1967 assignment beckons now: up close and personal, four barefoot children showering affection on a neighborhood dog, all of them oblivious to me and my camera.

The two previously unpublished photographs seen here, though clearly the work of a beginner, presage the style of documentary photojournalism I would later hone in my work with the elders of Appalachia in Western North Carolina — a reflection of famed WWII combat photographer Robert Capa, whose advice to beginners was, “If your pictures aren’t good enough, you’re not close enough.”

All these years later, I’m hungry to find out the human element in that long-ago assignment. Would it be possible to put names to faces? And to tell what they did with their lives? Maybe by finding elders in the community who recognize these “Boyz II Men” we can learn their stories. I’m betting that Danita and the good folks at Northside’s Marian Cheek Jackson Center can make that happen.

As they used to say in radio, “Stay tuned.”

These two photographs, culled from the 1967 photo spread in The Chapel Hill Weekly, were finally published in 1996, appearing in the book Children’s Talk in Communities and Classrooms, a research project examining the transition to school for a group of local Black children who participated in an early intervention study called The Abecedarian Project. The book was published by Blackwell and written by Lynne Vernon-Feagans — yes, she is my wife. For more information on the book and the study, go to:

To access “I Was Still Singing,” stories of Black women who changed Chapel Hill, go to:
https://chapelhillhistory.org/

Mrs. Gill and the Misfit Toy