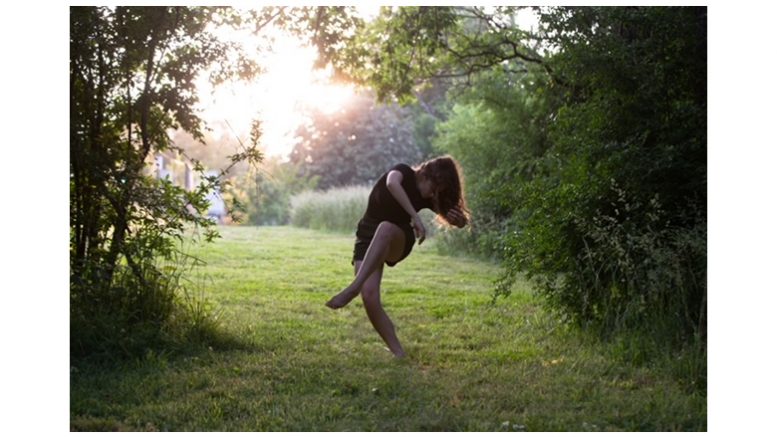 In March 2020, Jessica Alexander left New York City and returned to the Triangle area where she had grown up. During the summer, she was practicing dance outdoors with a friend “in a beautiful field,” when they turned to each other and thought, “why aren’t we sharing this.” Convinced that there had to be a way to create in-person dance happenings that adhered to COVID-related safety and public health protocols, they set out to create Driveway Dances, a small-scale project that brought dance — performed outside — to audiences in their own homes and gardens. “We were just watching so much dance online and feeling so sad” Alexander said. “It got to the point where it felt pretty soul crushing.”

Live performance was important to Alexander, who grew up in Durham, attended the Carolina Friends School and received her BFA in dance from the SUNY Purchase arts conservatory in upstate New York. “There’s a different sense of time when I’m watching live performance” she notes. “Something changes for me when I know I’m really a part of the whole thing, as opposed to the performance being recorded or on Zoom, where I’m very much separate. In contexts [that are not live and in-person], anything I do as an audience member or performer doesn’t really affect the performance.”

For some time, Alexander and her colleagues had been reflecting on how dancers could invite interaction in ways that made audience members curious or more comfortable about what dancers were doing. “Too often we would hear from potential audience members ‘I don’t understand dance. I shouldn’t go because I’m not going to get it.’” Driveway dances proposed a solution to that query by including conversation and dialogue about the work as an integral part of the performance event. Artists in Driveway Dances would perform a work and then invite audience members to take a moment to think about what they had just seen. “Did any moments stand out in your memory,” they would ask, “or any feelings that you had?” Audiences would respond with statements such as “Well, I saw your arms up, and it made me think of this baby or other things.” From there, conversations would expand, creating connections between dancers and audiences in ways that helped both parties feel less isolated.

The success of Driveway Dances encouraged Alexander to think of other ways to develop this approach to performance. In autumn 2020 and spring 2021, she presented “Drive-in Dances,” where artists again performed as audience members drove up to create a one-row line or half circle by each of three stage areas. As in Driveway Dances, dialogue was woven into the event, rather than just tagged on as an extra. Alexander noted that the dialogic aspect of the performances “felt really integral to the structure and something that was only possible because of the intimacy of the way we were presenting the work.”

Also, this past September, she and a larger group of local and out-of-town collaborators presented an Evening of Dance on the lawns of community members in the Lockridge neighborhood. These performances, supported, in part, by the Orange County Arts Commission, afforded dancers the opportunity to perform for audiences while allowing audiences a chance to experience artists and their art in unconventional settings. Courtney Mazeika (L) and Marlie Couto perform at An Evening of Dance. Photo by Sarah
Dwyer.

Alexander initially imagined pursuing a career in Dance not as an advocate and producer, but as a choreographer. She credits Annie Dwyer, recently retired teacher of dance at Carolina Friends School, for nurturing that impulse and grounding her with a sense of believing in herself and her desire to be an artist.

During her time at SUNY Purchase, she found herself gravitating to a group of students who had a strong ethos of self-sufficiency, the idea that “if it is going to happen, you will have to do it yourself.” When Alexander found herself back in the Triangle after many years away, she relied on those attitudes to reach out and gather artists to help realize her vision of activating dance, even in uncertain times. For the recent Evening of Dance performances, Leah Wilks and Killian Manning, both independent dance artists with long-term ties to the Chapel Hill/Durham dance scene, were among those who answered the call, as were choreographer Juliet Irving and other artists from North Carolina, San Francisco, and elsewhere.

Enriching dance by embracing the local remains at the forefront of Alexander’s future plans. She notes, “the idea of getting to know audience members as individual persons and they getting to know me as a person first, or over time, that’s something you can only really get through local dance and local art. If you come to a place on tour, you can meet people, follow them on Instagram, but you don’t run into them in the grocery store or see them at the gym. Having those kinds of relationships where you are part of a community feels important.”

Alexander is currently trying to figure out how to support artists who are investing in the local community. Young artists often gravitate to cities but, she says, “the biggest thing that I keep hearing from other artists is that they just need more time and more space. In large urban centers, that’s something that’s always lacking,” whereas the Triangle, she feels, offers more of both. She is working to bring a group of dance collaborators to the area next spring for a monthlong creative process that she hopes will serve as the foundation for increasingly longer investments of time and creative energy. “Increasing dialogue between dancers, and then between dancers and the greater community, can only be beneficial for everyone involved.”

While she feels excited about returning to the physical practice of her art, she has found producing dance to be exhilarating. “In general, the best moments for me, when I’m not dancing, have been watching the audience watch the dancing. It is really wonderful to be able to just sit back and see their faces.” Joy in feeling central to the creation of an artistic work without being the central focus of that work is characteristic of artists who have a love for organizing. Alexander speaks to this feeling when she describes the community efforts that go into realizing the body of work she has collaborated in generating over the past year. “I wouldn’t have done any of this without the participation and encouragement of the many people who really supported me in the beginning stages. This wouldn’t have happened without them. It feels really important that it’s not just me.”

Ray Eliot is a choreographer and dance educator who divides his time between Chapel Hill and Cholula, Mexico.