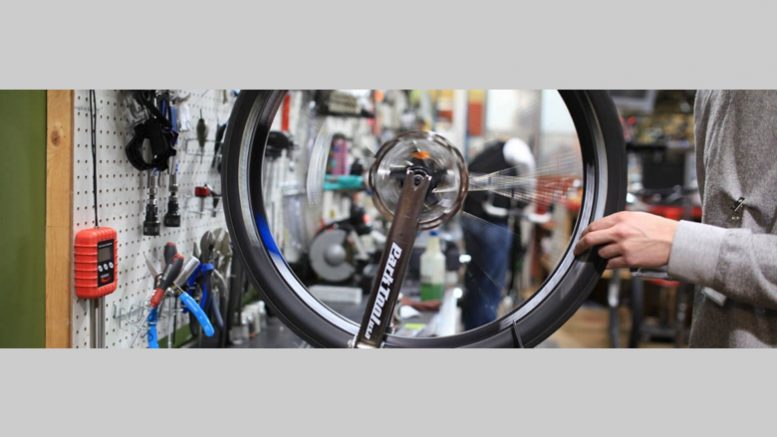 If a bike is on your child’s Christmas list this year, you may want to write a letter to Santa. Since the COVID-19 pandemic hit in early 2020, the demand for bikes has surged, locally and nationally, while the manufacture of bikes and bike parts — largely done overseas — has slowed.

As they say at Carrboro’s Back Alley Bikes, “Bicycles are the new toilet paper.”

In April, traditional and indoor bike sales, as well as parts and helmets sales, increased by 75 percent, according to The NPD Group.  Typically, sales for April are between $550 and $575 million, while this year they were $1 billion.

Jason Merrill of Back Alley Bikes said demand has been up about 100 percent from customers of all ages since the pandemic.  “I think a lot of folks have more time and being outside is the safest way to do this,” Merrill said.

With the pandemic, people were forced to look for socially distanced, outdoor activities.  The closure of gyms also forced people to find new ways to stay active and meet their fitness goals. Biking checks these boxes.

While increased demand accounts for part of the bike shortage, disruptions in supply and manufacturing make up the rest — not to mention that bike imports from China already plummeted in 2019 due to a trade war.

“It has been extremely difficult and that is two-fold, one being on the supply side,” said Merrill.  “The supply chain for bikes is pretty long and complicated; raw materials will come from different places and COVID-19 caused disruptions in different places at different times.”

Because producing a bike from start to finish takes about a year, products for 2020 were ordered in 2019, said Merrill. Model years for bikes change in the middle of a normal calendar year, so in order to avoid being left with old models, the final and smallest orders arrive in the spring —compounding the shortage.

And it’s probably going to continue to be very challenging for the next year,” said Merrill.  “The good news is we don’t rely heavily on the holidays, we cater towards adult riders.”

The situation is similar at Carrboro’s Clean Machine and the Bicycle Chain in Chapel Hill, which on their website are thanking customers for their patience.

“Due to unprecedented demand, there is a nationwide shortage of bikes and accessories, and an increased demand for repair service, which has exceeded our normal capacity at all locations,” the site says.

There’s currently limited availability on many products, the stores say, and turnaround times for repairs are often three to four weeks.

Heidi Perov, a founding member of Carrboro Bicycling Coalition and a long-time community bicycle advocate, said she thinks the biking shortage will work itself out, though it might take a while.  The area is better off than most, as the large volume of people who bike bolsters the used market as well as keeps up a steady demand for repairs, she said.

She believes that with the increase of bikers, at least partially due to the pandemic, the town needs to re-evaluate its accommodations for cyclists.

Chapel Hill and Carrboro are both “very healthy communities,” said Perov. “People like to go outside and it’s not just biking — you see people running, you see people walking, and if you give them a place where they feel safe doing that its incredibly important for peoples’ mental health to get outside,” particularly during a health crisis.

The Bolin Creek Trail, she added, has become “wildly popular — the number of people using it has exploded during the pandemic.”