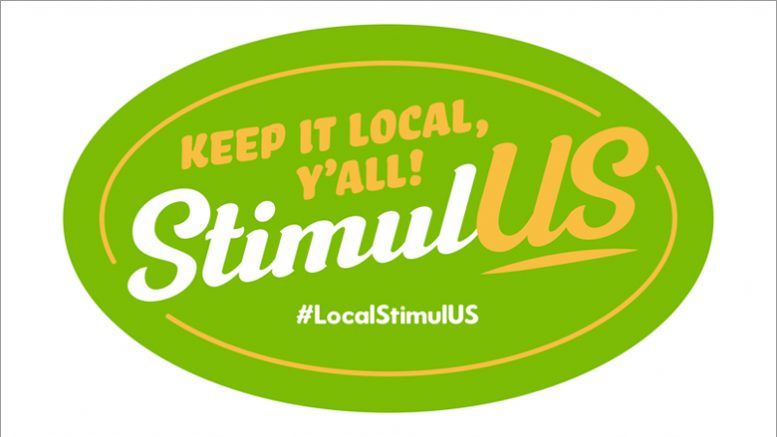 A new social media campaign is promoting local small businesses during the COVID-19 pandemic and its stay-at-home restrictions.

Launched by the Carrboro Business Alliance, the Chamber for a Greater Chapel Hill-Carrboro and Carrboro United, the campaign includes a green logo that reads “Keep it Local, Y’all! StimulUS,” and can be repurposed for virtually any town or business.  The campaign also encourages patrons to post about their favorite small businesses using #localstimulUS.

Cindy Sellars, marketing manager at the Splinter Group, the Carrboro-based marketing agency which designed the campaign, said via email that she thinks social media will be an effective way to get the message out about the shopping at small businesses.

“Social media is a great way to spread the word organically,” the email read. “Especially for a grassroots effort without a budget.”

Katie Loovis, vice president for external affairs at the Chamber for a Greater Chapel Hill-Carrboro, said Carrboro businesses have collaborated well since the start of the pandemic, for instance by starting Carrboro United, a meal and grocery pick-up service. Loovis said Carrboro United workers and others in the local business community were looking for new ways to help promote local businesses when they came up with the idea for an online, grassroots strategy.

“We started playing with the idea of investing the stimulus check,” Loovis said. “It was through a group of people just talking.”

The chamber and the Carrboro Business Alliance liked the idea when it was presented to them, and local businesses and their patrons have been posting about the campaign on social media for about a week.

Katy Poitras, the manager of Cat Tales Cat Cafe on West Franklin Street, posted on Instagram about a local artist using #localstimulUS on April 28. Although Poitras’s business, which helps get cats adopted in addition to selling coffee and snacks, is closed, she posted a picture of multiple knit cats and other animals made by local artist Barbara Zemskova. According to Poitras’s post, Zemskova had agreed to donate some of the proceeds from her knit cats to the cafe.

“It’s a good, easy thing to bring some attention to some of the smaller businesses in the area,” Poitras said.

The Arts Center on East Main Street, which has been offering arts classes online, also posted using the #localstimulUS hashtag on Instagram. Executive Director Dan Mayer said he thinks it is important to support small businesses during difficult times, and that art may help people to cope with the pandemic.

Others who have participated in the StimulUS campaign by posting about it so far include the Compass Center, Vecino Brewing, Weaver Street Realty, The Robby Oakes Mortgage Team, Durham Big Frog and Thai Station.

Bridget Pemberton-Smith, the marketing chair of Carrboro Business Alliance, said that the stimulUS campaign may expand soon and is looking to engage the community, although it’s unclear exactly how at this point.

“We’re looking at doing some sort of guerilla marketing around town using the logo and really getting it much more visible,” Pemberton-Smith said. “People can keep their eyes out for the campaign getting bigger than it already is.”

Sellars, at The Splinter Group, wrote that she thinks shopping local can have a significant positive impact on the community, and that approximately 67 cents of every dollar spent in local businesses stays in the communities where it is spent.

“We hope that when given a choice of where to spend, consumers will choose to support a local business,” Sellars’ said. “Local business owners, their families and employees are vital members of our community and they need us now more than ever.”

Small business owners or potential customers interested in the campaign should visit www.localstimulus.org.

Challenges Increase for Non-Citizens During the Pandemic

One More Benefit to Eating Well

Be the first to comment on "Local Businesses Looking for StimulUS"