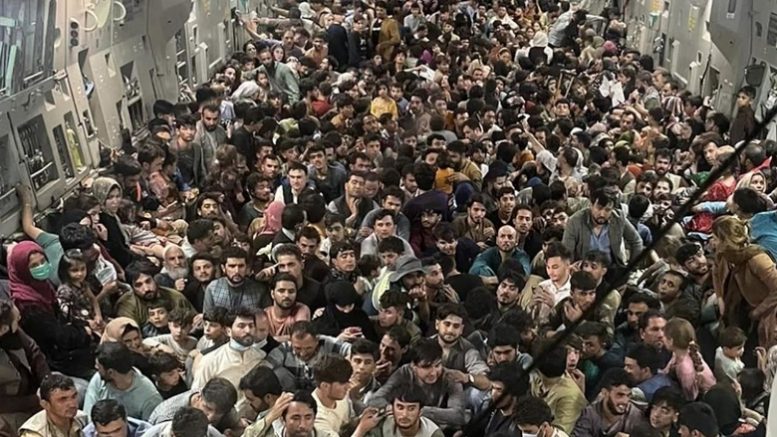 Afghani evacuees in cargo bay of a military C-17 airplane before leaving Kabul.

The scenes of the exit from Afghanistan were horrific. More than anything, the scenes of Afghanis trying to escape dominated the coverage, and the picture of the bay of the C-17 military cargo plane packed with over 650 people is already iconic, in a very disorienting way. One of my first rational thoughts after seeing the picture was to wonder where in the world they were going to go, with literally nothing but the clothes on their backs. I soon read that Qatar was the initial destination. I did not carry my curiosity or sense of responsibility any further at that point to wonder where they might be going after that.

In response to an earlier (but still ongoing) refugee crisis, our church agreed in 2015 to support a family from Syria that is being resettled in Carrboro. It was a large, parish-wide effort that began several months before the family arrived. There were many challenges, slip-ups and cultural and language misunderstandings that had to be overcome by both church volunteers and the family itself. It is not easy to be uprooted from your own land and culture and transplanted to Carrboro! Success in these endeavors is hard to define, let alone measure, but it has gone well, with the kids doing fine in Chapel Hill-Carrboro schools and the parents having jobs. It had gone well enough, as it turns out, for our church to sponsor another family four years ago, in 2017, this time evacuated from Afghanistan.

Which brings me back to Qatar and wondering where all those evacuees were going next. The rector of our church made the rather stunning announcement this past Sunday that four families, composing 28 of the more than 80,000 Afghani evacuees airlifted out of Kabul, were coming to Durham as relatives of the current Afghani family we are supporting. Twenty of the 28 evacuees related to our sponsored family are children. In total, between 100 and 500 Afghani evacuees are expected to be resettled in the Triangle area of North Carolina within the next six months.

Our church’s implicit “one-family-at-a-time” approach has been totally upended by these additional four families. Now, more than ever, it will be a large, parish-wide effort, in close partnership with other local churches and groups. The scope, timing, and logistics to support the transition for these families is daunting. The Afghani evacuees, inelegantly termed “humanitarian parolees” by the government, are not UN-certified refugees, which is a special category. As such they will not receive the initial, short-term support and benefits, such as SNAP (Food Stamps) and Medicaid, which are typically available to “certified” refugees. This further complicates the effort and the need for support.

We will step forward to meet the need, however, separately and in partnership with many other churches, social services groups, civic organizations and governmental agencies across the Triangle. As individuals and as communities, the rewards, insights and learnings from doing so will be immense, benefiting us, perhaps, as much or more than those we are serving. John E. Paul lives in Chapel Hill and is a parishioner at Church of the Holy Family.

Matt Hughes: Running to Protect our Democracy and Improve the Lives of Orange County Residents.