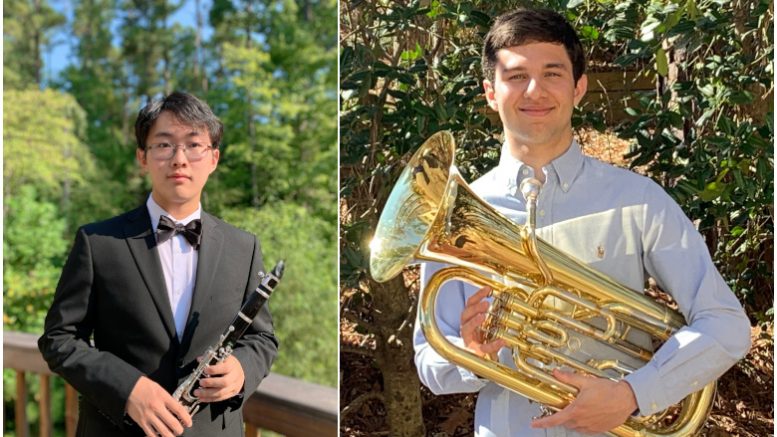 Now they are preparing to travel to National Harbor, Maryland, near Washington, D.C., to perform Nov. 6 with this prestigious band after being selected from hundreds of high school contenders nationwide.

Kevin Chen, 17, from East Chapel Hill High School, and Sam Webster, 17, from Carrboro High School, will showcase their years of musical study through this honor afforded only to the best and the brightest high school musicians in the country.

Both students have earned a place in the NAfME (National Association for Music Education) All-National Honor Ensembles (ANHE). The Concert Band is one of six ensembles performing, the other five being the Symphony Orchestra, Jazz Ensemble, Mixed Choir, Guitar Ensemble and Modern Band.

The NAfME All-National Honor Ensembles represent the top-performing high school musicians in the United States. The students not only have an opportunity to demonstrate their abilities before large audiences, but also receive an educational experience working with their peers under nationally and internationally known professional conductors, as well as gaining exposure to colleges, universities and conservatories recruiting top musical talent to their institutions.

“I am very honored for being chosen to play in the All-National Honor Ensembles Concert Band and happy to see a reward for all of my hard work practicing and playing the euphonium,” said Webster.

He took up the euphonium while in middle school. The euphonium is a brass musical instrument (in the tuba family) similar in size to the baritone horn, but with a wider, more conical bore (the air passage in the tubing) and an additionally flared bell that all result in a mellower tone than the brighter sounding baritone. It has three valves like the baritone, but more often has a fourth valve and may have a second bell.

Webster began his interest in brass wind instruments at the age of seven while in the second grade. “I started on the trumpet and developed an interest in the euphonium while attending UNC Greensboro Band Camp in the sixth grade. I was drawn to it and got the chance to switch to the euphonium when school started,” he explained.

The young brass player honed his euphonium skills by attending the Eastern Music Festival’s Euphonium Tuba Institute in Greensboro, North Carolina, studying with Dr. Demondrae Thurman and Dr. Aaron Tindall–twice. Thurman is celebrated globally as a performing and recording artist on euphonium, while Tindall’s tuba performances are hailed by symphony orchestras around the world. In addition, Webster participated in the Brevard Music Center Low Brass Seminar with Dr. Cale Self this past summer.

Webster didn’t forget to recognize the support of his mother, father and grandmother for their financial and time-consuming support. “They really encouraged me and gave me support,” Webster said. As for his future, he is in the process of applying to colleges with the hope of studying both environmental sciences and music.

“Sam Webster, in my 16 years of teaching, is one of the top three I have ever taught. He seeks and finds opportunities to expand his knowledge and is very driven,” said Spillman. “Sam is also very humble and never hesitates to ask for an opinion and feedback. He doesn’t know the word quit.”

Spillman has had one other student go to the All-National Honor Ensembles, specifically the Jazz Ensemble.

“I’m very excited. This is probably the biggest thing I have done in terms of music, so it is very thrilling,” said Chen.

“I started playing the clarinet when I was in the fourth grade. It was my first instrument,” said Chen. “Clarinet has always been my passion.” He attributes his desire to keep playing music to the social group he became part of at school.

“Just being able to play with them a lot and improve was what kept me focused,” Chen said.

He also recognized his good fortune to have devoted teachers and instructors–and a supportive family. He is currently in the application process for college to study to become an astrophysicist, as well as continue his musical studies. Chen is currently a member of the Tri-M Music Honor Society.

“The path to the All-National Concert Band is a bit confusing,” explained Ellefsen, “but essentially, a student needs to pass numerous auditions and do well in those auditions to continue to the next stage.”

Ellefsen has had one other student go to the All-National Honor Concert Band—also a clarinetist, in 2020.

The process of musical progress

Webster and Chen auditioned for their District-Level Honor Bands in January 2022. Succeeding in those auditions, they qualified to audition for the All-State Band, which took place this past March.

“There are so many layers to the audition process, which makes it all the more impressive two students qualified from the same school district,” said Ellefsen.

Chen and Webster will arrive on Nov. 3 at the NAfME conference at the Gaylord National Resort & Convention Center in National Harbor and attend daily rehearsals until their performance on Sunday, Nov. 6, according to the schedule. The All-National Honor Ensembles Concert Band in which Webster and Chen will perform will be conducted by Dr. Rodney Dorsey, professor of music and chair of the Band Department at the Indiana University Jacobs School of Music. Dorsey also serves as the conductor of the Indiana Wind Ensemble, which has performed both nationally and internationally.

The full roster of musicians for the Concert Band performance in which Webster and Chen will perform can be found here.

The roster is a reminder that not one, but two, outstanding students have put Chapel Hill-Carrboro on the national map this year.