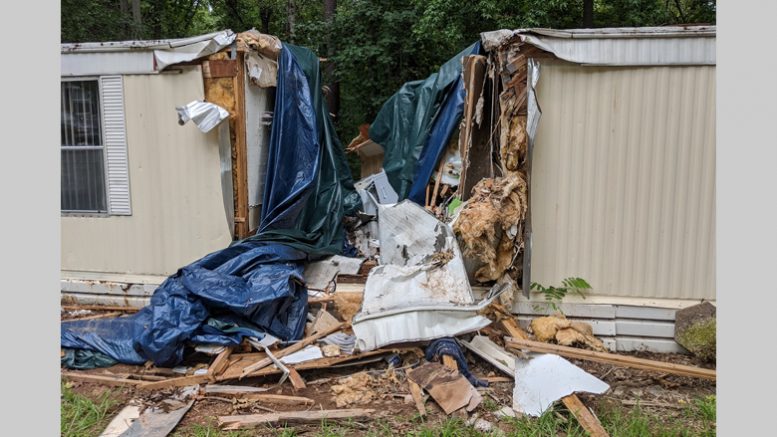 There was a four-foot-wide gap in Marvin Cruz’s mobile home. Splintered plywood, insulation and the beige panels that were once siding covered the ground. Even the tarps meant to cover the damage lay in the dirt.

For weeks, his old home stood there, destroyed. The debris wasn’t his main concern, though. He’s more worried about the land underneath — and how to pay for it.

More than two months have passed since the June 28 storm that swept through Chapel Hill with 40-mile-per-hour winds. Around 4:50 p.m., a tree collapsed on the mobile home where Cruz lived at Tar Heel Mobile Court.

Since then, Cruz, 37, has been staying with a friend in the same mobile home park. Still, he says, the rent bill appears in his mailbox every month. And he hasn’t been able to pay since the storm.

If he can’t find the money to pay his rent, though, Cruz could be at risk of eviction from the park — his home for the past six years — and would join the millions of Americans facing eviction due to the economic downturn caused by the COVID-19 pandemic.

What would happen if he were evicted? “What else can I do other than be on the streets?” he said. “What are you supposed to do? Work is always scarce, so there’s moments where I really don’t know what to do.”

The Centers for Disease Control and Prevention ordered a sweeping moratorium on evictions on Sept. 1 to address the crisis. The order requires renters sign a declaration acknowledging that their yearly salary is not more than $99,000, or twice that if they file a joint tax return, and that they would face homelessness if evicted.

But local immigration advocates said that ensuring Latinos and other communities of color are aware of protections against eviction has been a challenge throughout the pandemic.

As a member of the Latino community, Cruz is especially vulnerable. Thirty-one percent of Latino renters in North Carolina said they have “no confidence” or “slight confidence” they will be able to pay next month’s rent on time, compared to 24 percent of white renters, according to a U.S. Census Bureau survey from July.

The risk of eviction is additional stress on Cruz, as he grapples with the emotional toll caused by the June 28 storm.

“The (park owners) tell me they’re going to clean up everything; they’re going to set up a trailer in my old lot,” he said on Aug. 29 — two days before his mobile home was removed from his lot. “But I don’t see the point of that. If it had only been a tree that fell, there wouldn’t be a problem. The problem is someone died.”

Abel Grijalva, 47, was sitting alone in the trailer when the tree crashed onto the home.

“And you see, when someone dies, someone you spent time with, it’s … fear,” Cruz says, his arms wrapped around his chest, looking over his shoulder. “You can’t be at peace there.”

Like most families living at the mobile home court, Cruz owns his mobile home and pays rent to the park owners for the land his home sits on.

He works as a line cook at a Chapel Hill restaurant, making around $1,000 a month, depending on how many weekly hours of work he can get. But since Gov. Roy Cooper’s March 17 executive order shut down restaurants across the state in response to the COVID-19 pandemic, Cruz’s hours have been cut.

That’s why finding the $500 in rent each month has been so difficult. It’s why he hasn’t paid his rent since the storm.

Kathryn Sabbeth, a law professor at UNC, said the consequences of eviction are far-reaching.

“People often imagine eviction is something that happens to you because of unfortunate circumstances,” Sabbeth said. “And that’s true, but it’s also the cause, sometimes, of much worse consequences. That is damage to people’s credit, relocation to overcrowded or substandard housing, worse housing than they were in, destabilization of education, destabilization of employment.”

The loss of his home and the constant risk of eviction harmed Cruz’s mental health, leaving him unable to work for a month after the storm — worsening his financial situation.

“Sometimes I go walk over by my old lot and the memory always gets stuck in my head,” Cruz said. “No matter how hard I try to forget…it’s like a broken record.”

Delores Bailey is the executive director of Empowerment Inc., a Chapel Hill-based affordable housing advocacy organization and housing counseling agency. She said that Orange County residents are eligible for up to $4,000 in emergency housing assistance. But for some tenants, this still isn’t enough.

“The concern is ‘what happens to me? Where do I go after I use my $4,000? My job has not started back yet’ or ‘My job is not going to start back again’ and nobody feels empowered,” Bailey said. “They’re afraid. They’re afraid they’re going to be put out on the streets.”

Most of Cruz’s neighbors at the Tar Heel Mobile Court are blue-collar Latino families. Trinidad Cervantes paints houses and furniture.

Is he struggling to pay his rent? “The rent, water, electricity — everything,” he said while painting a desk on his porch. “People don’t want you coming into their house to paint now.”

The disproportionate effects extend beyond the number of COVID-19 cases, though.

The Families First Coronavirus Response Act requires employers to grant workers paid sick leave or expanded family and medical leave if they were affected by the pandemic. But Sabbeth said many workers were excluded from these benefits and many employers fail to follow the law.

The increase of evictions, however, is an issue that preceded the pandemic, she said.

“The cost of housing has gone up while wages have not and other forms of financial support have not, and in fact, some of our social safety nets have disappeared,” she said. “And people are spending a much higher percentage of their income on rent than historically they have.”

Andrew Willis Garcés, director of Latino advocacy group Siembra NC, said Latinos are especially vulnerable to eviction due to the industries they tend to work in.

Bailey said there’s been difficulties communicating policy changes during the pandemic to communities of color, fueled in part by a distrust in government agencies across these communities.

“They are being evicted because they don’t think there’s anything out there, but there is money for them, at least in Orange County,” she said. “So, the problem is how we let everybody know it’s available to them. I don’t know how we best advertise that.”

Willis Garcés said most immigrants in North Carolina don’t know they have the right to an interpreter in court during an eviction hearing.

“For a lot of people, that doesn’t mean anything because they don’t know,” he said. “You know, they’re not told when they get their eviction hearing notice that they have that right.”

Bailey said most shelters in Chapel Hill are full, making eviction during the pandemic “a very sad and bleak picture.”

1 Comment on "Local Latinos Struggle with Risk of Eviction"