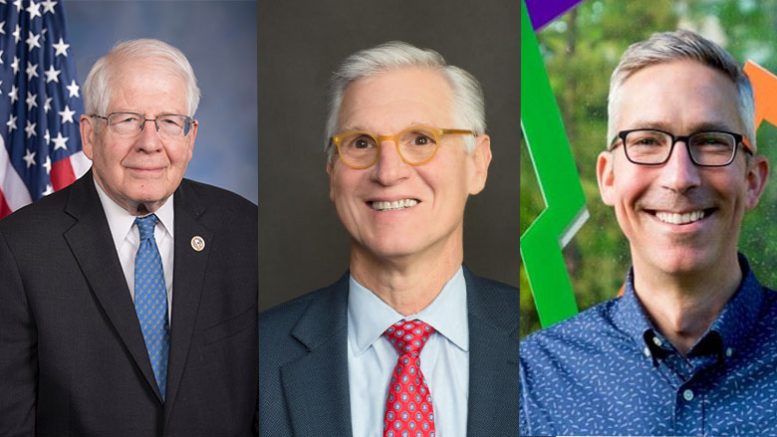 A series of dire accidents in recent weeks in which cars struck pedestrians and, most recently, caused the death of a cyclist, have thrown a harsh new light on the chronic traffic congestion in and around Chapel Hill and Carrboro. Multiple jurisdictions are implementing plans to manage traffic and are advancing new ones. But as development continues to boom in the area, officials at every level agree that continuing to develop transit is the best option.

“Chapel Hill has an exemplary bus service,” said Rep. David Price (D-NC) whose 4th District includes Chapel Hill and Carrboro. “Ridership has outpaced many larger cities. That takes cars off the streets and emissions out of the air.” Price is a strong advocate for transit as part of a multi-modal approach to transportation. He is particularly enthusiastic about the bus rapid transit (BRT) plans for Chapel Hill (see map).

“The BRT plans for MKL Boulevard and down to Southern Village are quite far along,” said Price. “It is a sound plan, seems very well conceived. The layout of the area to be served is quite linear, so is well suited. We’ve had good leadership in Chapel Hill. There is high-quality development such as Meadowmont and Southern Village that are generally well designed. And now there is good headway on BRT.

The North-South BRT project (https://nsbrt.org/) has completed 30% of its design work and continues to move forward through the federal environmental review process, according to Brian M. Litchfield, director of Chapel Hill Transit

“We anticipate the [review] process being completed in 2022, and are in the process of selecting a firm to complete final design. The project has received a favorable rating in the federal funding process and is in the queue for federal funding consideration of about $100 million. We are not able to submit a federal grant request until we have secured the necessary non-federal match of about $45 million, which we anticipate coming from state funding sources at this point.

“Unfortunately,” Litchfield continued, “changes and delays to the state’s funding cycle have required us to adjust the project’s schedule and budget and it now appears that the construction could begin no earlier than 2026 (originally anticipated as 2023), with service beginning no earlier than 2028 (originally anticipated to be 2027).” Both construction and service dates are subject to change based on federal and state funding.

“The state continues to work closely with the Federal Transit Administration and our federal delegation and to identify non-federal funding that could assist with the project,” Litchfield added. “We recently secured a federal grant to assist the Town with planning for transit-oriented development around North-South BRT stations, and that is moving forward with the Town’s land-use planning effort. We are also in the process of selecting a firm that will take the project through final design.”

The towns of Chapel Hill and Carrboro, along with the University of North Carolina, are partners in Chapel Hill Transit (CHT), and Carrboro Mayor Damon Seils sat on the N-S BRT policy committee. “Transit is the No. 1 budget line item for us,” said Seils. “It should and will continue to be very important.”

Seils made a point of noting that “traffic congestion in Carrboro has actually gone down in the past 20 or 30 years, even as development has proceeded. One important reason for that is that we have been intentional about investing in transit, as well as pedestrian and bike routes. The decision to go fare-free 20 years ago shows that commitment.” The locally preferred alternative (LPA) BRT route as adopted by the Chapel Hill Town Council includes sections of the corridor where existing travel lanes will be converted into bus lanes and sections where new bus lanes will be constructed. In both areas, travel-lane widths will be reduced and enhanced pedestrian access improvements will be implemented along with the construction of a multi-use path on both sides of the corridor, except through downtown and campus.

Litchfield stressed that “the LPA followed a significant community engagement effort and approval from the North Carolina Department of Transportation [NCDOT], which owns and maintains the roadway the project plans to use.”

Michael Parker, a member of the Chapel Hill Town Council, noted that there is widespread support for the North-South BRT. “There has never been any substantial opposition. The challenge has been the money, to secure the non-federal funding.”

In addition to serving on the town council, Parker is a former chair and current member of the regional GoTriangle system board and board member of CHT, the second largest transit system in North Carolina.

“We need to find $40 to $50 million of non-federal money to activate the federal funds,” Parker explained. “We have secured $14 million through the Orange County Transit Plan, which leaves us about $35 million to go. The plan has always been to get that from the state, but that keeps getting delayed.”

Noting that NCDOT’s financial difficulties have been well reported, Parker added, “by rule, the department just has very little to spend on transit. At this point it does not look like the money [for N-S BRT] will be available until 2026. And unfortunately we cannot just start now with the funding in hand and get the rest when it is available. Federal funds are not released until all the non-federal money is secured.”

The N-S BRT “is critically important,” said Parker, who sat on the policy committee with Mayor Seils. “The route is the most heavily traveled corridor” and the multi-modal reconstruction of the route to accommodate bus, car, bicycle, and pedestrian lanes is an essential step in land-use planning.

“We are committed to transit-oriented corridors,” Parker elaborated. “Transportation has to be an integrated system; that is something people tend not to appreciate. Chapel Hill has the second-largest transit system in the state, and until it was recently passed by Kansas City, had the largest fare-free system in the country. BRT is a logical extension. Once the north-south route is operating, we can look at an east-west route that will be the high-frequency backbone of an integrated system in Chapel Hill and Carrboro that will be coordinated and supplemented by local bus and para-transit.”

A fact sheet about the N-S BRT can be found at https://bit.ly/3gE1aiu.