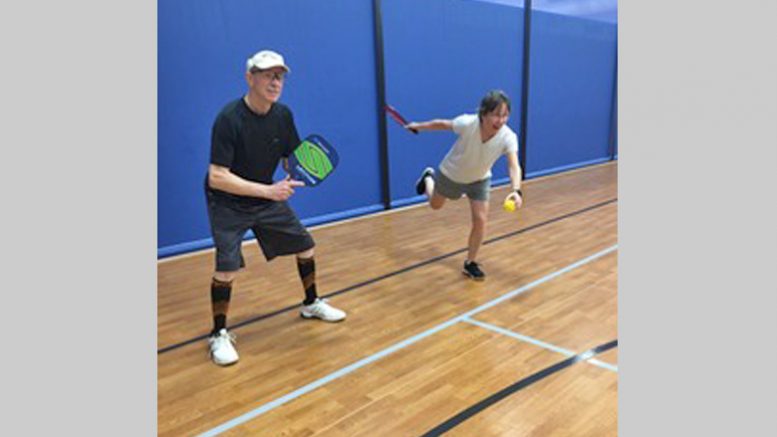 What is pickleball? It is the fastest growing sport in the U.S., with approximately 3.3 million people playing. And here in Chapel Hill we have a vibrant, enthusiastic community of about 800 pickleball players.

From sun-up to sundown, you can usually find some folks hitting that little ball with lots of holes, with a variety of paddles, on an outdoor court at Ephesus Park and inside courts at Hargraves Community Center, Chapel Hill Community Center and Hillsborough’s SportsPlex. (And still we need more!)

Pickleball attracts all ages and backgrounds. Folks who have played badminton, table tennis, tennis, squash, racquetball or those who have never played any sports are attracted to it. Pickleball is magic and you easily fall in love with it. There is a spot for anyone who has the heart to move, smile and say “good shot!” So, there should be no surprise that the Chapel Hill Pickleball community supported the efforts to introduce pickleball to Kubugu, a remote village in northeast Ghana, in west Africa.

The pickleball connection dates to the year 2000, when a local church in Chapel Hill sent seven individuals to Kubugu on a short-term mission trip to help the missionaries build their home. During that trip, a close relationship was created with the local pastor, Peter Sandow, and his family.

One individual of the seven returned many times since and supported other projects identified by Pastor Peter. Monies have been raised to build solar panels, help dig wells and in 2014, to create a pre-school. The pre-school was very successful and each year a classroom/grade was added as the children aged up. Now the pre-school has morphed into a primary school, from pre-school and kindergarten to grade six. The children have excelled in their studies, and the founders, Pastor Peter and his wife Stella, the parent PTA and the Board of Directors have led it well.

After being approached about adding a pickleball court to the schoolyard, and an explanation of what exactly is this strange-sounding game, the people of Kubugu embraced this idea. We moved forward to make it a reality.

The Chapel Hill pickleball players donated 50 balls, 30 paddles, a net system and 25 nylon backpacks. The Durham Bulls baseball club donated many baseball caps, as they have done over the years. These caps are coveted, as the logo of the bull, or cows, are a valuable commodity in Kubugu. Finally, the Bouncing Bulldogs, our local World Jump Rope Champions, sent along many jump ropes for pickleball warm-up and to introduce the skill of jump roping. With all this equipment, we were set to launch pickleball and jump roping in Kubugu.

Kubugu is a village of about 700 people. Ghanaians often refer to its location as “overseas” because in the past it was accessible only by canoe. Though the trip now includes paved roads and bridges, it is still quite the journey, including 13 hours in the air on three planes, and several hours of commuting over challenging surfaces, to arrive in this beautiful pocket of humanity.

Ghana has a healthy democracy and many happy, thriving people. But what it didn’t have, at least in Kubugu, is a woman with white hair appear with pickleball paddles, balls, a net, jump ropes and baseball caps.

To prepare for the pickleball court, teachers, students and parents carried bags of sand and cement on their heads to the schoolyard (the truck was stuck in the mud) to create the surface.

The location was perfect because it could be used for pickleball and jump roping, but also for school activities and to minimize the erosion of the schoolyard during the rainy season. In addition, the billy goats found a new place to sleep each night — oh, how they loved to escape to the cool surface from the intense heat during the day!

Each morning, billy goats were shooed off the court, followed by a good sweeping away of their poop. School began, and the minute classes concluded, pickleball started, and continued until the sun set. The players picked the game up quickly, even the challenging scoring.

The biggest challenge was getting the players to hit the ball hard, seizing upon those attackable shots! When all else failed, the elderly woman got on the court and played a few points, modeling this skill by smashing the ball at the feet of these students, and 20-something teachers. In good spirits (though a bit taken aback) they laughed heartily and acknowledged the point was for this American elder. The paddle taps at the end of the each game was a highlight, always done with much enthusiasm and acknowledging “good game.”

After 10 days they mastered the game and were bursting with pride. They rightfully claimed themselves the Pickleball Headquarters of Ghana. The truth be known, the village is so remote, few people could actually come to see pickleball in action, but they know, I know and now you know, it all started in Kubugu, thanks to the donations of our local organizations.

And the people of Kubugu are now lovers of this game. Yet again, evidence shows that whether you are in North Carolina or North Ghana, there’s always someone up for a game!

Winkie La Force is a member of the Chapel Hill Pickleball Community and has been to Kubugu many times since the year 2000.

Council’s Vote on Aura Will Leave a Legacy