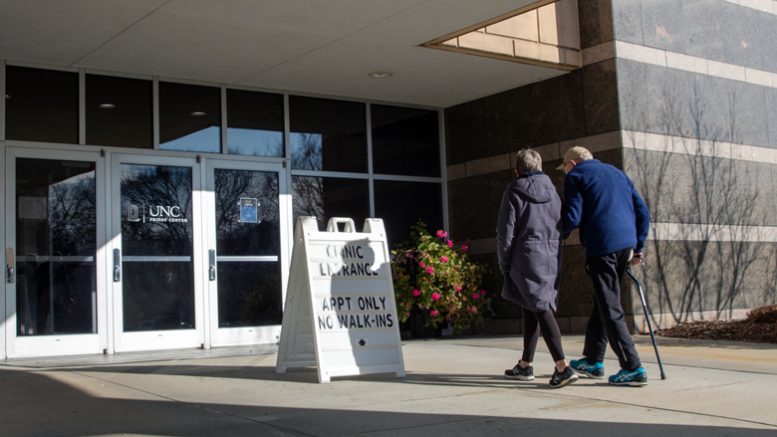 Linda Paylor was one of the first patients Monday morning as COVID-19 vaccinations began at the Friday Center for those 75 and older during Phase 1b of the N.C. vaccination program.

For Paylor, the virus hit close to home over the holidays.

“My brother and his entire family of nine were sick over Christmas with COVID,” Paylor said. “And I have a friend who’s coming in in about 30 minutes to be vaccinated.”

The first day of the new phase at the center went smoothly, according to multiple individuals interviewed, despite some minor first-day logistical problems.

“There are so many of us getting vaccinated that it’s hard to get an appointment,” Paylor said. “I had a friend that called UNC to get vaccinated and they told her the only appointments available were in Rocky Mount and Goldsboro.”

Although her name was misspelled on one of the computers, getting the vaccination was a nice experience, said Barbara Pedersen. Vaccination times varied from 30 minutes to over an hour. Annette Munson, who walked out of the Friday Center shortly before 10 a.m., said she was very happy with how the morning went and it only took her 30 minutes.

“They’re working hard to make it go more smoothly,” Munson said. “They believe they’re going to have about 1,000 a day once this gets going.”

“The whole process is going to be well organized,” Jacobs said, “Since this was the first morning, people were still learning their roles, but I was pretty impressed about what had gone on.”

As with other vaccinations and medical protocols, those coming for their vaccinations had to sign in, wait, answer some questions and sign their names before getting their shot. After the jab, they then had to wait 15 minutes to ensure there wasn’t an allergic reaction before scheduling their second COVID-19 vaccination three weeks out.

Paylor, who said she is the first person she knows to have gotten vaccinated, said it was more than a personal benefit. “(Getting the vaccination is) the thing I can do — not only for myself — but for the rest, certainly try to keep the hospitals from being overloaded,” she said.

Liz Cothran was vaccinated along with her husband. Cothran said that the couple have no doubt about the vaccine and they believe that vaccination is their best chance of staying well.

“We haven’t been out of the house very much since February,” Cothran said, “and we’re just looking forward to getting back so we can go to the grocery store and just get about town.”

An Elon University survey found that 40.5 percent of North Carolina respondents said they would get a COVID vaccination while 20.5 percent said no and 39 percent said it depends/not sure.

“I would tell (those who have doubts) to look to the medical community who have the expertise to make an assessment,” Jacobs said, “and they pretty universally say take the vaccine.”

Despite the minor hiccup Pedersen encountered with her name being misspelled, she had one final piece of advice.

“Make an appointment,” Pedersen said. “Let’s get this over with.”

Be the first to comment on "Local Residents Get Their Shots"