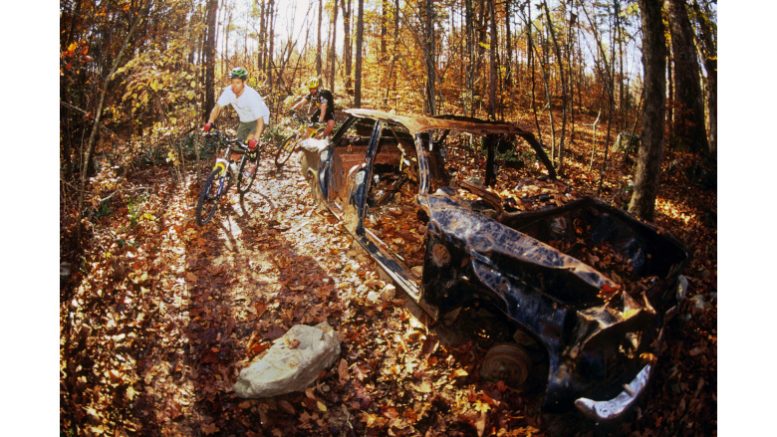 They spoke in code about the results of their work.

What is now known as Wormhole — a part of the Carolina North trail system — was The Trail. Log Cabin was This Trail. Crow Branch Overlook was That Trail. Neverland Over Loop was This One. Neverland Inner Loop was This Too. When mountain bikers said they were going to ride This Trail or That Trail, or maybe This One, nothing was given away to outsiders.

“The trails were unauthorized,” said Marshall Hance, one of the guerrilla trail builders. “And we were trying to keep them secret for as long as possible. We wanted to have our own private trail network.”

It turned out to be a good thing, Hance later realized, that the secret didn’t last.

Matthew Lee, another early trail builder, told me, “We thought it was better to seek forgiveness than permission.”

Lee, who grew up in Chapel Hill and now lives in Carrboro, built his first trails as part of a backyard fitness course for his brothers and sisters. His siblings ignored the course, but it was an auspicious start for Lee, who went on to become a star in the world of mountain bike racing, winning the Tour Divide multiple times.

“We had these bikes and we wanted places to ride them,” said Lee. Another trail-building pioneer, Stewart Bryan, said, “You can call them bootleg trails or guerrilla trails, but that’s all there were back then; if you wanted to ride a bike on dirt in the woods, there were no legal avenues to enjoy that.”

“Our strategy,” Lee said, “was to use topographic maps to find greenways, creek bottoms, university land, and other municipal land where we could build trail, and then figure out how to string those trails together into longer rides. Back then you could do maybe 45 minutes’ worth of single track in town.”

Back then started in the late 1980s and extended into the early 2000s. Lee and other local mountain bikers, many of whom were UNC students, bike shop employees, or both, would gather, sometimes at night, to rake leaves and trim brush to clear paths through the woods. Most of the work was done in colder months when there were fewer bugs and it was easier to see the shape of the land.

Satisfaction came from creating a trail one day and riding it the next. But the real draw, according to Derrick Nehrenberg, who helped build trails around the old airport, was sociability.

“It was really about hanging out with your friends,” he said. “It was building stuff you liked and riding it and wrecking and trying it again—seeing who was fastest. But the best part was just being with your friends.”

Rob Noti, another member of the airport area trail-building crew (who now co-owns Back Alley Bikes in Carrboro), liked the challenge of finding spots for new trails.

“You had to train your eye to see corridors and contours where you could build a fun trail,” he said.

Noti still enjoys building trail. The appeal? “I like finding rhythm and flow in the forest,” he said.

Despite forgoing permission, the trail builders met little opposition. On one occasion deer hunters objected to the intrusion of mountain bikes. Another time the builders faced a shotgun wielded by a land owner suspected of practicing bootleg horticulture himself. For the most part, people seemed happy with the trails. Brian Plaster takes his bike over obstacles on a bootleg trail in Carrboro. Photo by Joshua Weinfeld.

“Typically what would happen,” Bryan said, “is that once we finished, people nearby—walkers and dog walkers—would start using the trails. They didn’t help build the trails, but they appreciated somebody else doing it. So it was a positive thing.”

Lee shared a similar sentiment. “Those conflicts just weren’t there in the beginning, maybe because there were so few of us,” he said.

Eventually, mountain bikers could ride guerrilla trails in many places in and around Chapel Hill: the forest west of Seawell School Road; around the Horace Williams Airport (now Carolina North); near the North Carolina Botanical Gardens; on Terrells Mountain; behind Southern Village; along Bolin Creek from MLK/Airport Road to Franklin Street; between Forest Theater and the Community Park; near Gimghoul Castle; and on what is now Governors Club land. Many of the trails are still there.

One legacy of the guerrilla trail building is preservation, so far, of the Carolina North tract. Nehrenberg, who now lives in Colorado and last rode the airport trails in 2010, said he was impressed on that occasion with UNC’s efforts to maintain the area as a community resource.

“The trails we had built underground for ourselves before the forest got razed—which is what we expected to happen—were in better shape than I ever thought they could be,” Nehrenberg said. “It made me feel happy.”

Nehrenberg and Noti both credited local running groups with a major role in pushing the university to save the trails.

“It might have started out rogue with us,” Nehrenberg said, “but it was runners and other trail users who fought to preserve the forest.”

Hance, who now lives in Asheville, felt the same way about the Carolina North area.

“I wasn’t trying to preserve that,” he said. “I just wanted a cool place to ride my bike. But looking back, the real consequence is that there’s a public resource that’s cherished by a lot of folks.”

As Lee summed it up: “The risks we took in building those trails have paid off.”

The guerrilla trail builders cited a number of legacies of their work, including the creation of several professional trail-building companies; better understanding of how to build trails that are ecologically sustainable; recognition by developers and public officials that trails are valuable amenities that draw people to a community; and the sales of lots of mountain bikes.

While the legacies are apparent, their historical roots have largely been lost. “I’ve been doing this for many years,” said guerrilla trail builder Brian Plaster. “And it’s rare that anybody says ‘thank you.’”

“People just don’t know about a lot of the work that went into building these trails,” Plaster added. “I can remember when there were maybe ten guys riding mountain bikes around here. Now there are thousands of local riders.”

And more trails to ride.