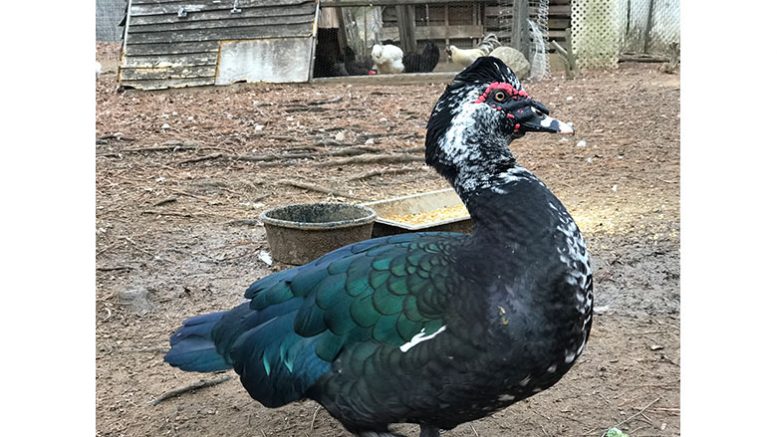 Lucky stood stunned in the middle of the dirt yard surrounded by a poultry symphony. He had never heard such sounds before – a gaggle of geese honked, 30 roosters crowed, 20 hens cackled, a turkey gobbled and 10 speckled guineas sang, “Buckwheat, buckwheat, buckwheat.”

He turned slowly around looking at his new environs. Hens nested in old mailboxes along the fence, a goose dunked in the child’s blue plastic swimming pool, the open gate led to a meadow and in the distance, a pond. Maybe he’d died and gone to duck heaven.

I leaned down to stroke Lucky’s head and smooth his feathers with tears in my eyes. “You’re in your new home, Lucky. I will miss you, but you are going to like it here. Cindy will take good care of you.”

I found Cindy by posting “Lonely Duck” on our NextDoor listserv in the Chicken Lovers group. I wrote: “Black male Muscovy duck needs some other Muscovies.” Cindy wrote that she, too, had a single male Muscovy that might like a friend.

Muscovies are the largest kind of duck on the continent, and probably the most reminiscent of their dinosaur ancestors. The black caruncle knob on Lucky’s black and white beak bobbles when he struts on his strong scaly legs and wide webbed feet. His feathers are iridescent black and green with white strips on his powerful wings.

Lucky doesn’t “Quack!” like most ducks, but he’s a good communicator. When alarmed, he raises the feathers on top of his head to look like rock ‘n’ roll singer Elvis Presley. He is Darth Vader when he grunts a deep “huh, huh, huh” with all neck and head feathers at attention, and a whirling dervish when he attacks head down, wings outstretched. Lucky Duck earned his name early on. His was the only egg of six that Honey, the pure white Ameraucana chicken, hatched one spring. And he survived not one but two hawk attacks. On the red-tailed hawk’s first try, Lucky ducked under the back porch steps, just as Honey had taught him. But a couple of days later, he was busy eating grass in the middle of the yard, and the hawk swooped silently in, grabbed Lucky’s head in his talons and pulled him into the air.

Lucky flailed his wings and legs, wrested free and fell, right into the creek. Since he’d been raised by a chicken, he’d never been swimming before, but this seemed like a good time to give it a try. He took like a duck to water.

Every evening, Lucky swam over to roost with Toby on the edge of a neighbor’s dock. At sunrise, Lucky swam back to greet me at my back door. He wagged his long tail feathers like a puppy and bowed his head under his belly as if saying, “Good morning, good morning.”

I counted on his being there, no matter what. He was an anchor in my morning ritual. I’d rub his neck and he’d follow me down the steps to get his breakfast. I’d keep the squirrels away till he finished and then he’d fly down to the creek for his morning bath.

The one glitch in this happy scenario was that Lucky spent most of the rest of the day stalking Honey and sometimes trying to mate with her. A classic Oedipus complex, and not a healthy situation, especially for Honey who is half Lucky’s size. Rather than laying her beautiful blue eggs, Honey spent much of her day running or hiding from the big black duck. If she did try to lay an egg, Lucky climbed up the ladder to sit outside her nest box. Not the most relaxing setting for laying an egg!

I decided as much as I admired Lucky Duck, I loved Honey’s eggs even more. That’s when we found Cindy, and our duck got lucky once again.

Cindy reports that her white Muscovy, Fred, is now roosting every night with Lucky on the railing of their back porch. In the morning Fred and Lucky walk to the pond together. Lucky Duck. Let’s Go to the Beach

The Tree in the Lake