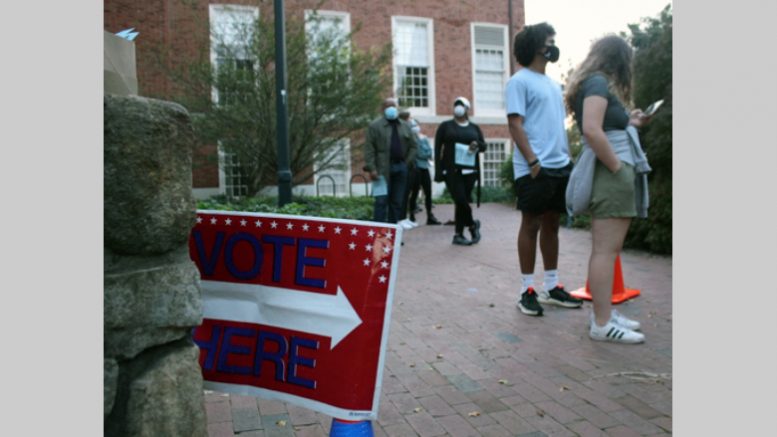 Prospective voters wait outside the Chapel of the Cross to vote on Oct. 15, the first day of early voting.

The sun was setting as voters waited in line outside the Chapel of the Cross to cast ballots on the first day of early voting in Orange County.

Both students and permanent residents were there, and everyone, it seemed, wore masks. Volunteers from the Democratic Party handed out sample ballots. By this time, volunteers from the Republican Party had already left.

Almost 4,400 people across the county had cast their ballots by the day’s end. The Orange Works early voting site at Hillsborough Commons accounted for the most ballots — almost a fifth of them. This was followed by Carrboro Town Hall, the Seymour Senior Center, Chapel of the Cross, University Place and Efland Ruritan Club.

Almost one-third of Orange County’s registered voters have requested mail-in absentee ballots, largely, officials have said, because of fears of COVID-19. But the coronavirus pandemic didn’t dissuade many at the early-voting site, who cited concerns about making their vote count as the main motivation behind showing up in person at Chapel of the Cross.

Long-term resident Mariam Fahrer said she had considered sending in a mail-in absentee ballot but decided against it.

“We thought this was an important election, and we wanted to be present,” Fahrer said. “And we live locally, and we’re fortunate enough to have voting sites to do that. I did think about that [mail-in ballots], and I have neighbors and friends who did that, but we go to church here and so this seemed like the right place to be.”

Rupi Jain, a UNC-Chapel Hill senior majoring in global studies and philosophy, helped organize a group of students who came to vote together. Jain, who is also the president of UNC Young Democrats, said her decision to vote in person was also motivated by convenience. UNC-Chapel Hill senior Rupi Jain was one of 664 people to cast a ballot at the Chapel of the Cross early-voting site on the first day of early voting.

“I am an out-of-state student, so I decided to register and vote at the same time, just so I can kind of kill two birds with one stone,” Jain said. In an interview several days before early voting began, local resident Butch Wall said recent events made him worried that a mail-in ballot would not be counted.

“I’m going straight to the polls. Even though they’ve been talking about it [mail-in ballots], I already knew what I was gonna do,” Wall said.

One in-person voter at Chapel of the Cross said she had gone to multiple early voting sites because the lines were longer than she had ever seen. Yet approximately 1,000 more ballots were cast on the first day of early voting in Orange County during the 2016 presidential election. But the differential does not include this year’s mail-in ballots, according to Rachel Raper, director of the Orange County Board of Elections, so voter turnout on the first day of early voting may not have decreased quite so much.

Be the first to comment on "Making Sure Their Ballots Count"