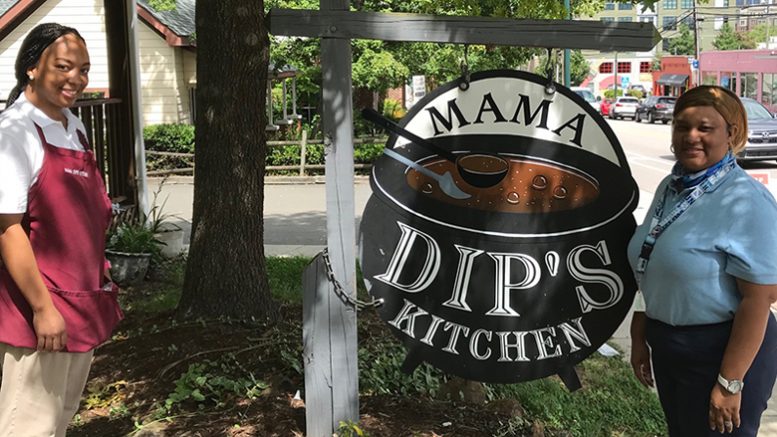 It’s been a long hot summer in Chapel Hill. Local independent restaurant owners are nervous, because their future has never been more uncertain. To sustain us until the path ahead is clear, all we can do is look to the past and tell the stories of those who have come before us. They can bring us hope and strength, knowing we’re not the first to endure hard times.

Think of the late Mildred Council, better known as Mama Dip. Her restaurant is famous around the world now, but it’s just around the corner from us, on Rosemary Street. It’s hot with cornbread muffins, collard greens, and pies in the oven. It’s such a part of our community that it feels like it’s been here forever.

But of course, nothing has been here forever. Mildred acquired her first restaurant in 1976, when Chapel Hill’s only black real estate agent helped her take over a failing Chapel Hill diner. She only had $40 to buy food to make breakfast and $24 to make change, money she saved from her job at a hospital. That morning, she made enough money to buy ingredients for lunch, and then used the lunch profits to run out and buy ingredients for dinner. By the end of the day, she had $135, and Dip’s Kitchen was born. The Councils in their Sunday Best

Later in her life she was invited to the White House by President George W. Bush, and exchanged letters with President and First Lady Barack and Michelle Obama. She received many state and local honors, including the Order of the Long Leaf Pine, North Carolina’s highest civilian award, in 2000.

It’s easy to forget, in light of all this success, that even our heroes had to endure hardships and bear immense burdens. How did she do it?

“Mama believed in hard work and giving back to community,” she says. “She taught us kids everything she did at the restaurant. From how to operate the cash register to baking pies, waiting on tables, and making her favorite dishes, Mama wanted the next generation to learn what she knew. It was important to her that we learn the value of the dollar.”

Spring said her mother also believed in the principle of “pull as you climb,” helping others to be successful. “She was the embodiment of that,” Spring says. “If you have the ability to let someone in and help them, use what you have to do that.” Mildred Council died in 2018 at the age of 89. Her children, grandchildren, and even great-grandchildren carry on the traditions she started, in the kitchen she built. It feels like she’s still here. That’s what happens when you create a legacy built on food, love and family.

“Three cookbooks have been published among us,” Spring says, “and many of our recipes have been packaged and trademarked including corn muffin mix, pancake mix, poppy seed dressing that is our house dressing and our BBQ sauce. My sister sells biscuits that are so good she named her business Bomb Biscuits. My other sister created cake mixes that bake into red velvet or pound cake and my daughter, Tanya, has her own pecan crisp cookies as well as a shop at Crabtree Mall in Raleigh called Sweet Tea and Cornbread.” Mama Dip inspired a whole line of products and books.

Again, these are dark times for the cooks, the waiters, the bartenders and the restaurant owners, who don’t know what the next months will bring. But think for a moment of Mildred Council, who started her first restaurant in the morning and didn’t know if it would be there at the end of the night. She did that every single day for a long, long time, and she ended up sending letters to Michelle and Barack. Which is just to say that she, like us, weathered some hard times, and that on the other side of this we’ll have something to write about, too.

“My mama cooked really traditional Southern food that made people feel good,” Spring says. “The emotion and memory that food sends out to people is a big deal. Her food stirred up memories.”

Oh, Spring, it still does. The Burwell School Historic Site is a Gem of Historic Hillsborough