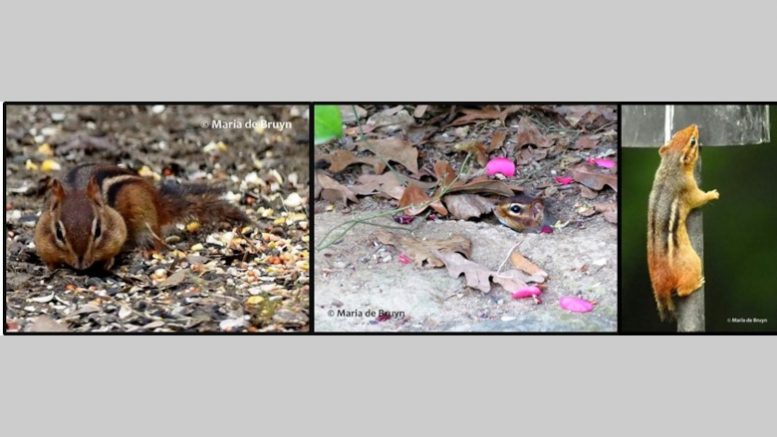 As spring progresses, we’re seeing more mammals on the move. Those whom we unfortunately see dead alongside — or on — roads often include members of the rodent group: groundhogs, squirrels and chipmunks.

Would you be surprised to discover that about 40 percent of all mammal species are rodents? When people hear that term, many immediately think of rats and mice, but the group is more diverse. What they all have in common is a pair of incisor teeth in their upper and lower jaws that never stop growing. The two groundhogs seen above showed them off in a toothy pose.

These rodents are fairly solitary but live near family members. They greet one another, with one individual touching the other’s mouth with his or her nose. If there is danger, they call out a warning by giving a high-pitched whistle, which has led to them also being called “whistle pigs.” To escape predators, these hefty mammals can climb trees.

You may not see groundhogs too often — unless you have a garden. They enjoy eating alfalfa, dandelions and clover, but I can attest to their penchant for savoring tasty vegetables like tomatoes. One came up onto my porch to sample the wares in my container garden! In my experience, however, they tend not to stay around too long. A rodent that we see much more often in yards, parks and public gardens and along trails is the Eastern gray squirrel. Some people find them amusing to watch, while others wish they would just go away — especially birders who end up spending more on bird food than they planned because these clever rodents find innumerable ways to get up onto bird feeders. Facebook groups for birders regularly have postings by people asking for suggestions on how to thwart squirrels from gaining access to their feeders.

I’ve moved my feeder poles away from trees, roofs, tall bushes and shrubs because squirrels can successfully launch themselves onto a feeder 10 feet away. In my yard, they have gnawed at the bottom of a baffle designed to keep them off poles as they try to pull it down. Their ability to chew through plastic and metal may be one reason that they manage to keep their dentition to “normal” lengths since their teeth grow about 6 inches per year.

In the past week, one especially athletic individual has figured out how to jump over the baffle from the ground to get to feeders. I’ve now raised the baffle and put chicken wire on it in an experiment to see whether this will deter this determined rodent.

Many nature observers do admire squirrels’ cleverness. For example, squirrels spend a lot of time hiding food in caches dug in the ground. To outwit other squirrels and rodents who might be watching, they prepare a hole, pretend to deposit food and cover it up. Then they go somewhere else where they don’t see a rival watching and hide the food in another place. Scientists have determined that gray squirrels’ spatial memory is excellent as they later are able to retrieve about 80 percent of the food they stored in their numerous caches. Another university study showed that almost two years after squirrels learned to solve a tricky problem in order to gain access to a desirable food, they were still able to recall the solution to the problem.

A rodent that many people tend to like more than groundhogs and squirrels is the diminutive Eastern chipmunk. The “cuteness” factor undoubtedly plays a role as these active little animals do tend to look endearing.

They also look amusing to many people when they fill their cheek pouches to carry food home. These pouches can stretch to three times the size of the animal’s head so that the chipmunk can build up a sizable store of saved food for winter.

These rodents live in burrows dug about 3 feet underground. The multiple “rooms” (one used for nesting and others for food storage) can be connected by alleyways up to 30 feet or so in length. They can also climb; one individual in my yard has been imitating the squirrels who run up my bird feeder poles.

Because chipmunks don’t tend to eat vegetables or figure out ways to deplete bird food, they may be the rodent that people like best. If you take the time to just observe these three commonly seen mammals, however, you might find that they all have behaviors you find interesting or amusing. Do try to avoid hitting them while driving — tolerating their presence, especially given how much of their wild habitat has been destroyed, means that we are at least helping maintain biodiversity in our environment.

And Now for Something a Little Different

Appreciating and Protecting Trees – A Focus for National Forestry Week

Be the first to comment on "Mammals on the Move"