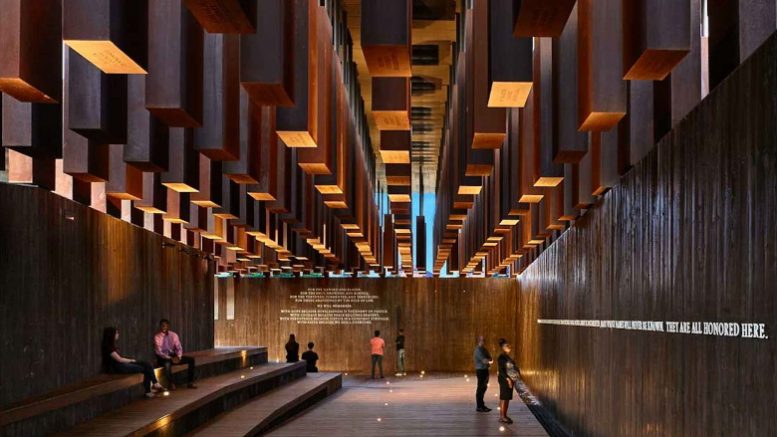 The Equal Justice Initiative [EJI] opened the National Memorial for Peace and Justice in Montgomery, Alabama, on April 26, 2018. It is the nation's first memorial dedicated to the legacy of enslaved Black people. A project to erect an historical marker in remembrance of Manly McCauley, a Black man lynched by a white mob just west of Carrboro in October 1898, represents a collaboration between the Orange County Community Remembrance Coalition, the Town of Carrboro, and EJI. PHOTO CREDIT: Equal Justice Initiative.

“The Wilmington Massacre of 1898 occurred while Manly McCauley’s body was still hanging from a tree 150 miles away,” writes Chapel Hill author and historian Mike Ogle in his 2019 research paper entitled, “Manly McCauley, 1880-1898, Background on His Life in Orange County, NC, and his Death by Lynch Mob just West of Chapel Hill.”

Manly McCauley was a young Black farmhand who eloped with a married white woman, Maggie Lloyd Brewer, just days before the 1898 statewide election and subsequent Wilmington Massacre of 1898, according to Ogle’s research paper. McCauley and Brewer were captured four days later by a posse and returned to their farming community. Upon their return, members of the posse led Manly McCauley out into the woods and hanged him in the vicinity of what is now the intersection of Old Greensboro Road and Hatch Road outside Chapel Hill.

Ten days later, on November 10, 1898, the Wilmington Massacre occurred. White supremacist militias murdered more than 60 Black residents of Wilmington, NC, just two days after the statewide election as part of a violent overthrow of the town’s elected government. The Wilmington Massacre represents the only successful coup d’état in American history.

Renée Price, chairperson of the Orange County Board of Commissioners, explained the Equal Justice Initiative requires communities who wish to have a marker constructed by the nonprofit go through a detailed, rigorous process that includes a soil collection ceremony as well as an essay contest for public high school students.

“Students in grades 9-12 are challenged to write an essay that reflects on a historical event and connects it to present-day issues and their lived experiences,” the EJI website states.

Four to five winners are chosen and EJI awards a minimum of $5,000 in scholarships and prizes. Winners will be announced publicly during the dedication of the historical marker, with the first place winner reading their essay during the ceremony, according to EJI’s website.

The high school essay contest has not yet been held in Orange County, Price noted.

The next step in the process: The Town of Carrboro must sign a memorandum of understanding [MOU] with the Equal Justice Initiative. Once the MOU is signed and agreed upon by both parties, the historic marker will then be created by EJI — the nonprofit founded by Bryan Stevenson in 1989 — and eventually installed by the Town of Carrboro.

“It’s in the process because certain things need to be clarified — for example, the timeline,” Price said. “We know it takes at least six months, but we’re close. We’ve got governmental entities on board — the towns and the county are on board with this and we’re working together.”

Dr. William Sturkey, associate history professor at UNC-Chapel Hill, said he believes the Manly McCauley historic marker will be impactful and serve a vital educational purpose in strengthening the fabric of the community.

“It would be significant because so many African Americans have been erased from our history,” Sturkey said. “And I think it’s really important to better understand exactly the contributions and experiences of Black people in this region in order to allow us to more fully appreciate the full scope of Black life in the central part of North Carolina.”

“It allows future generations to better understand race in a way that ultimately sets us free, and allows us to gain some sort of reconciliation with the history of race in this country,” he added.

Diane Robertson, the political chair of the Chapel Hill-Carrboro NAACP, said the facts of our nation’s founding have shaped our future, which underscores the need to correct the historical narrative of race in America. Robertson said she’s volunteered her time and energy to the project because of her firm belief in the power of understanding our history.

“It’s important to understand the history because every time you one-off and isolate these [incidents], you lose the opportunity to make the case to the people that are most impacted, and that is citizens of this country,” Robertson said. “They have been robbed of understanding the real story and therefore robbed of an ability to build a more perfect union…but there’s an absolute through line from 1898 to [the attempted insurrection of] January 6 [2021] and much of that through line sadly runs through North Carolina.”

Price said history helps us understand who we are, and if the history isn’t correct, then we have the wrong view of who we are and we’re headed in the wrong direction.

“If this great experiment is to survive and thrive, we have to be honest and truthful with ourselves and with one another, and passing down the correct information to our children,” Price said. “And we need to understand that history if we’re going to be able to honestly and effectively address it and move forward into a future where there is no racism — if that’s possible.”

Price said a second collaboration with EJI — an historical marker to be erected in Hillsborough — is also in the planning stages. The marker in Hillsborough would honor four lynching victims from 1869, including Wright Woods, Cyrus Guy, Jefferson Morrow and Daniel Morrow.

EJI’s Community Remembrance Project is part of the nonprofit’s campaign “to recognize the victims of lynching and advance honest conversation about the legacy of racial terror by collecting soil from lynching sites, erecting historical markers, and inviting community members to visit the Legacy Museum and National Memorial for Peace and Justice in Montgomery, Alabama, where the horrors of these racial injustices are acknowledged,” according to the organization’s website.

EJI opened the National Memorial for Peace and Justice in Montgomery, Alabama, on April 26, 2018. It is the nation’s first memorial dedicated to the legacy of enslaved Black people. To date, EJI has helped 54 communities across the U.S. in the installation of historical markers in its effort “to help towns, cities, and states confront and recover from tragic histories of racial violence and terrorism,” according to its website.

Sturkey said the Manly McCauley story is even more compelling when one considers the historical context. McCauley was lynched just one week prior to the November 8 election of 1898, and 10 days prior to the Wilmington Massacre of 1898. Sturkey said there is a strong connection between the events that occurred in North Carolina nearly 124 years ago and the present.

“I think that anybody who understands what happened in Wilmington in 1898, can see pretty clear correlations with January 6, 2021,” he said. “That was a white rebellion against a duly elected democratic government. If we understood the context of that, that I think people would really truly appreciate the direction of where this whole thing might go.”

Robertson, a member of President Biden’s Advisory Committee on the Arts, said the stories of lynching victims may present an inconvenient truth for those who would prefer to whitewash our nation’s history, and that is why the truth tellers must persist.

“I don’t think you can say that loud enough because no one wants to believe it, because if they believe it, they have to do something about it,” Robertson said. “And they don’t know what to do because it would require maybe more than any individual feels like they can give or should give themselves the resources of their time.”

“But I am totally convinced that unless we peel this onion and smell it as we peel it, and the private tears that it brings — we have got to get out of this circle because it’s a downward spiral,” Robertson added. “The stakes were horrible in 1898 and they’re still horrible [today] if we don’t course correct.”