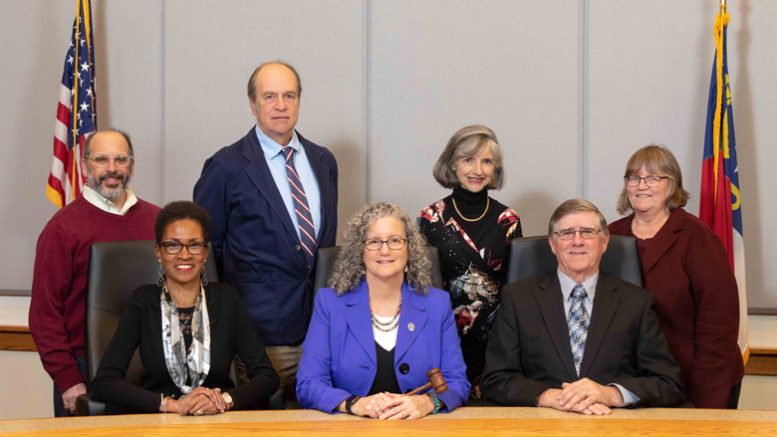 The resolution before the Orange County Board of Commissioners at its Sept. 15 meeting called for the support of legalizing marijuana. But that wasn’t clear from the title: “A Resolution Supporting the Decriminalization of Marijuana.”

Commissioner Earl McKee noted the discrepancy. He pointed out that the majority of “whereases” in the document presented by Commissioners Chair Penny Rich were, instead, about something a little different.

By the time the resolution got to “Therefore Be It Resolved,” it had evolved to advocate the state legislature “to legalize the distribution, sale, and use of marijuana products …” and how to spend the resulting sales tax revenue.

McKee voted against the resolution, which passed 6-1 with no discussion among commissioners and no one from the public speaking in favor of it.

“[Legalization] was not what the title speaks to,” McKee said in a phone conversation later in the week. “If it had spoken exclusively to decriminalization, I would have been highly inclined to support it. The major reason I voted against it was I considered it a bait-and-switch. Legalization is entirely different from decriminalization.”

The passage of the resolution comes at the same time an act introduced in the U.S. House of Representatives would remove federal penalties for marijuana and erase some criminal records concerning the drug. The law was expected to come to a vote next week, but has now been pushed back to after the election.

The county resolution made similar points that McKee said he had no quibble with: “… an arrest for possession of marijuana can have an impact on housing, student loans, future employment, child custody determinations …” and that “as a result of disparate enforcement, Black North Carolinians are over three times more likely to be arrested for marijuana possession” than white residents, according to an ACLU study.

An arrest for a non-violent offense of simple possession creates a permanent criminal record that is public information, and McKee said he would like to see that expunged from an individual’s record. But he could not support legalizing marijuana, which would allow the state to sell and generate tax revenue from a product that is not healthy for people, he said.

“That puts North Carolina in the drug business,” McKee said.

Riley Ruske, the only member of the public to address the commissioners on the issue at the meeting, objected to the resolution because of health concerns. Some consider marijuana a gateway drug that leads to the use of more addictive drugs, he said, that can lead to other criminal behavior, addiction and death.

“Whether smoked or ingested, this is not a healthy product,” he said. “If county officials are concerned about the health and well-being of our citizens, they will not pass this resolution.”

County attorney John Roberts said the county’s ordinance and Board of Health rule that prohibit smoking in public places were enacted to protect people from second-hand smoke.

“Presumably if the state were to legalize the use of marijuana in North Carolina,” he wrote in an email, “the ordinance and the rule would be amended to add marijuana to the public smoking prohibition.”

Legalizing marijuana would remove any restriction on the amount of the substance an individual could possess, sell and distribute, and that leaves McKee uneasy.

“You could haul five kilos of marijuana in your car, and that would be legal, like hauling five kilos of cigarettes,” he said. “If you’re selling by the kilo, that’s different than having three joints in your truck.”

After the vote, Rich said she would send the resolution to the state legislature and the commissioners in the state’s other 99 counties.

Nancy E. Oates is a former member of the Chapel Hill Town Council.

Be the first to comment on "Marijuana: Decriminalize or Legalize?"