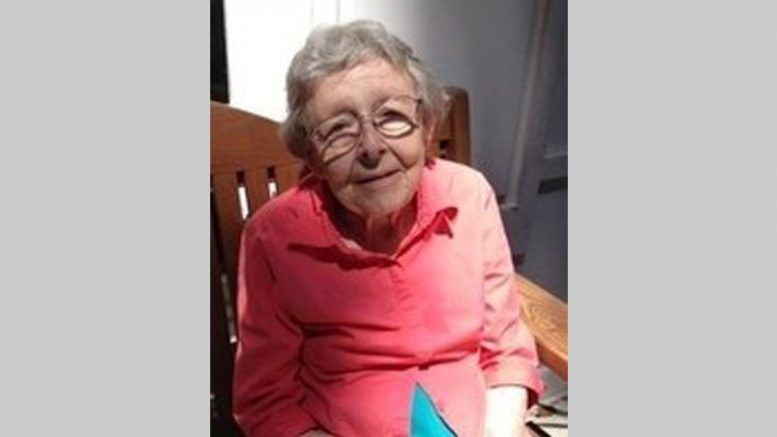 Martha Peery Gwyn, 96, died on September 5th after a short battle with Covid-19. She is survived by seven of her children, Christopher Gwyn, Sara Gwyn, Rachel Gwyn, Gregory Gwyn, Rebecca Gwyn McQuoid, Brian Gwyn, and Hannah Gwyn. She is also survived by 10 Grandchildren, and 14 great-grandchildren. She was preceded in death by her husband Robert and her son Nicholas.

Martha and Robert lived their beliefs with integrity, always striving to make the world a better place. Martha was born in Thorntown Indiana on December 4th, 1923. She helped on the family farm, began school in a two-room schoolhouse, and attended the Sugar Plain Friends Church across the road from the farm. Her teenage years included the Future Farmers of America and the Sunshine Club. Martha attended Earlham College (majoring in Latin), taught school in Indiana, earned a Master’s Degree in Theology from Hartford Seminary, worked with WWII refugees, taught in the Friends School in Ramallah Jordan, earned a Master’s Degree in Social Work from Tulane University, and worked for the YWCA in Houston Texas. It was in 1956, at the Houston Friends Meeting, that she met and married Robert Gwyn. They moved to Carbondale Illinois, where Martha worked for the Child Welfare Department.

Martha and Robert had their first son – Christopher – and adopted Sara, their first daughter. While living in Champaign-Urbana Illinois and then Muncie Indiana, they adopted Rachel, Gregory, Nicholas, Brian, and Hannah, and then after the family moved to Chapel Hill in 1967 they adopted Rebecca. A life-long Member of the Society of Friends, Martha was an integral part of the Chapel Hill Friends Meeting, and served on the board of Carolina Friends School. Martha and Robert were frequent participants in the anti-Vietnam War vigils at the Chapel Hill Post Office. Martha and Robert were also founding members of the Lockridge Community, north of Chapel Hill, where they personally built a much-admired three-dome home. Martha loved the two years that she and Robert were caretakers at the Friends Center in Honolulu Hawaii.

After her children were grown Martha increased her volunteering with the Chapel Hill Interfaith Council, the American Friends Service Committee, Amnesty International, the Democratic Party, and more. Martha Gwyn is, and will be, truly missed; her accomplishments and the people whose lives she touched will long continue her legacies and love. An in-person Memorial Service and Celebration of her life will be announced at a future date.

UNC Getting Out of Housing Business