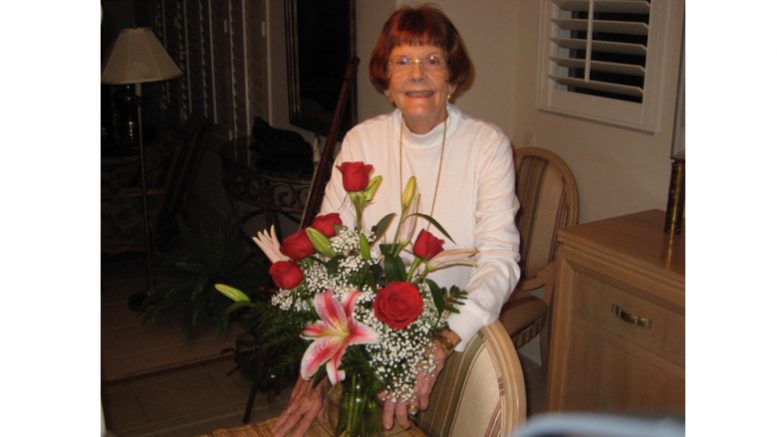 Mary Frances Dahl died at UNC-Chapel Hill Hospital after a sudden heart attack in the early hours of April 26. She had been a resident at Chatham Ridge Assisted Living in Chapel Hill for the past seven years. She was born to parents Jack E. and Aleta M. Dahl at Sartori Hospital in Cedar Falls, Iowa, on February 17, 1927. Mary Frances attended Public Schools in Cedar Falls and graduated from high school in 1945. She was known as “Frana” throughout her life.

She reflected on many fond memories of Cedar Falls, where the Dahl family had started a furniture store as German immigrants and later founded and operated Dahl Funeral Home in Cedar Falls for several generations. Frana lived through the depression as a child and would recall her mother often feeding men who came to their door after hopping off freight cars from a nearby train track. She was very close to her grandparents, the Dahls, and her grandmother’s parents, the Murphys of Irish descent, who loved her very much and significantly influenced her young life.

Her mother, Aleta, raised and trained show horses, and Frana was an avid equestrian with a favorite horse named “Blackie.”

Frana was very musically talented, particularly in voice. She attended the National Music Camp at Interlochen, Michigan, during her high school summers majoring in voice and speech. She entered the University of Iowa in Iowa City, where she majored in Speech Pathology and completed her B.A. degree in 1949 and her Master’s Degree in 1950. She was a proud member of Alpha Delta Pi sorority and the Zeta Phi Eta national speech honor fraternity.

She met her husband-to-be Kermit Harris Vermilyea (1916- 1986) while traveling by plane to accept her first job in Annapolis, Maryland, where she became a speech therapy supervisor for Anne Arundel County. They were married in 1952 and had one daughter, Mary Michelle, who was born on September 18, 1956.

The couple resided for the most part in Annapolis, Maryland, where they were very active in the civil rights movement in the 1960s to late 1970s. They traveled to Rio de Janerio as emissaries representing the state of Maryland for Governor J. Millard Tawes to the sister state of Niteroi in Brazil.

Frana’s prominent legacy will be the lives of the many children she impacted during her more than 30-year career with the Anne Arundel County Board of Education as a speech therapist in the school system. Her final assignment at Parole Elementary School in Annapolis was the last and closest to her heart before retiring in 1987. She was much loved by her students, who affectionately called her “Mrs. V.”

She had a passionate love for the Atlantic Ocean and spent many happy times with family in Rehoboth Beach, Delaware, and Ocean City, Maryland. The most enjoyable place she lived in Annapolis was in Bay Ridge, which offered magnificent views of Chesapeake Bay and a beach. She loved to entertain, and she and Kermit often threw fabulous parties for friends and family. Although she had only one daughter, her home was often filled with teachers who were in transition and needed a place to live or many of her daughter’s friends who were always welcome.

Frana became “Nana Frana” on August 8, 1981, with the birth of her only granddaughter, Jessica Rhiannon Guice.

In December of 1991, after the death of Kermit in 1986, Frana married Dr. Harold Brown, and they became residents of Ft. Myers, Florida, until he died. There she enjoyed an active lifestyle of golfing and swimming. She was particularly proud that she became a clown to offer activities to patients at the Health Park Hospital.

The births of her great-grandchildren fulfilled the latter part of her 95-year life. She moved to Chapel Hill, NC, to be near her family.

She is survived by Ty and Vera, 7, and Lucia, 5, the children of Jessica Guice and Michael Albritton of Carrboro, NC. For the past 8 years, Frana resided at Chatham Ridge Assisted Living resident where her unique personality and participation in daily life will be fondly missed.

Her daughter Michelle and Michelle’s husband Bob Cassell live close to Chapel Hill in Fearrington Village and were able to visit Frana weekly and often daily until she passed on April 26 after being transported to UNC hospital with a sudden heart attack. She died peacefully at 3:30 am, holding the hands of her daughter and granddaughter.

She was pre-deceased by her parents and her brother James Dahl, who was killed in an automobile accident—leaving two sons, Michael and Jon Dahl. Frana also has a step-granddaughter, Julie Cassell Vlach, and two step-great-grandchildren, Danny, 15, and Krystina, 18, who live in Sterling, Virginia.

A memorial service will be held at Chatham Ridge Assisted Living Wednesday, June 1, at 3 p.m. Anyone wishing to attend may come; please wear a mask according to their protocol. Instead of flowers, you may donate to The Local Reporter. Frana supported this local nonprofit newspaper where her daughter, Michelle, works.

Pulling Down the Purple Reign