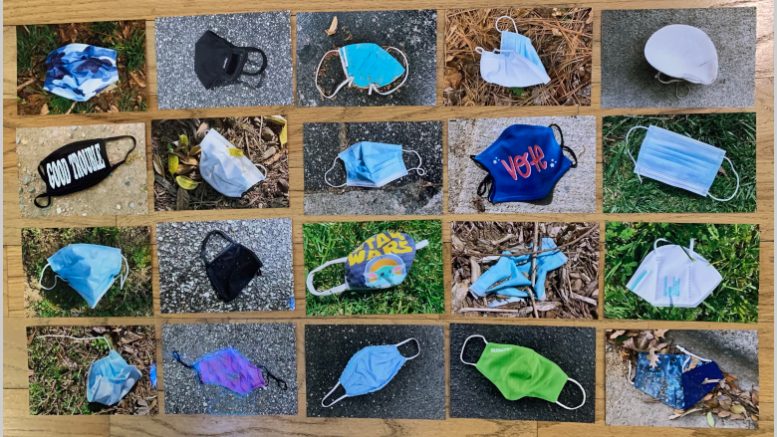 For all y’all who’ve gotten your shots, and in light of the Centers for Disease Control and Prevention’s new masking guidelines, this week I’m offering a visual celebration of this weird but hopeful period we’re going through. I’ve heard it called “the New Not-Normal.”

On one of my daily walks back in early February, I chanced upon a COVID-19 facemask lying in the gutter, and I was filled with the sudden urge to take a picture of the discarded object. (Yes, I go nowhere without a camera.)

The editor/critic in my head at once demanded, “Stop! What on earth are you doing, wasting your time making such a silly photo? What are you going to do with it, anyway?!”

But, as a photographer, I have long since learned to shush this inner cynic — for experience has taught me to obey the Nike mantra of “Just Do It.” And then, without fail, the reason will present itself, as the Zen followers say, “in the fullness of time.”

Sure enough, the next day, another discarded facemask presented itself, as if it were beckoning to me: “Here I am. Take my picture, too.” Suddenly, I had a pair. And the next day, a trio. Three’s a crowd and four is a quartet, five a quintet … and so on.

Soon the idea of the facemask photo-quilt evolved — and from then on, for the last three months, daily walks turned into scouting missions, photo-hikes in search of tossed, lost or thrown away facemasks.

Structurally, I realized my patchwork quilt needed to be constructed of consistently presented images, all photographed mindfully for an aspect ratio to fit a 4×6 inch horizontal frame.

My ground rules were simple: I tried for the most part to photograph each mask as I found it, untampered with, untouched, “en plein air” — in gutters, sidewalks, lawns, ditches, parking lots or woodsy trails — each one a bit of found visual poetry. A plaintive fabric statement about our plague year. Evidence of our common plight, suffering and eventual triumph.

I would hope that 10 years from now this collage will be looked upon as a documentary photo-poem, and viewers will shake their heads, recalling that awful year of 2020. And how we pulled together to earn the right to breathe freely again.

An Outbreak of Kindness