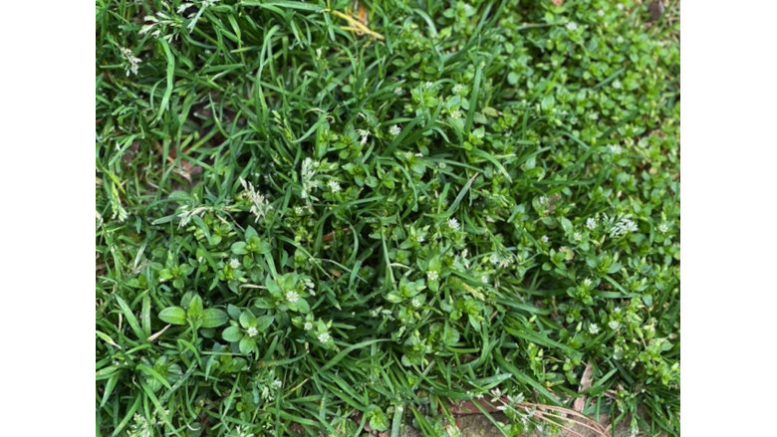 Chickweed among the grass. Photo by Kit Flynn.

There has long been a TV advertisement that makes me want to scream. It features a pristine lawn bordered by flowers and shrubs and leads the viewer to conclude that all one needs for weed control is a regular application of glyphosate, the most popular weed killer on the market today. My response is this: Please think before you act.

The longer I garden, the more I realize that gardens are unnatural – albeit desirable – creations. Try as we might to be in tune with nature, in reality we are often working against her. Not only does nature fight us by sending us droughts and floods, extreme heat and cold, she also gives us weeds. Sooner or later, we come to the realization that to garden is to weed.

Now what exactly is a weed? Though weeds are ubiquitous, the term is surprisingly hard to define, despite the fact we recognize one when we see it. The only description to pass muster is that a weed is “a plant in the wrong place.” If you look up a definition in the dictionary, you will run across these adjectives: “nonnative,” “wild,” “competitive” and “vigorous growth habit” but none of these really encompasses the full meaning of a “weed.”

A weed, I would submit, is simply an unwanted plant. The hybrid hellebores were wanted plants until they weren’t. They have become, in my garden at least, weeds.

Seeds are everywhere so it’s important to realize that you should avoid tilling the soil, unless it’s absolutely necessary. Every shovelful will expose these seeds to the light they need to germinate. Simply put: Tilling the soil will produce a large number of weeds. The reason mulch is such an effective weed suppressor is that it shields these seeds from light. It’s important to note that many seeds remain viable in the soil for as long as 20 years.

We gardeners prattle on and on about the merits of our soil, its composition and its texture. We natter about the merits of compost and mulch because they are so instrumental in building up the quality of our soil. Organic mulches leave our soils healthier while suppressing weed growth. Glyphosate and its cousins, although they can give us a weed-free garden, are indiscriminate killers that contribute little to our constant quest for good soil.

Instead of turning to glyphosate as a weed solution, try mulching and good old-fashioned hand weeding. What happens when hellebores run amok. Photo by Kit Flynn.

During the gardening season, I, a firm vigilante, weed almost daily – I cannot help it. I must stop and pull a weed out as soon as I detect it as its presence nags at me. Nothing galvanizes me to action quicker than that dainty, innocent chickweed flower – so delicate that it’s almost invisible – because I know that inoffensive flower will produce many seeds for next year’s crop.

As a vigilante, I bend and stoop but rarely kneel because I’m constantly moving on. Procrastinators use those small stools and mats because they have a higher weed concentration in a particular area than I do. I do not allow weeds to grow so profuse that I can sit and stay for a while.

From my admittedly unscientific observation, vigilantes always wear gloves while gardening because they know they will be weeding whereas many procrastinators do not. Even the nicest soil belonging to a good family contains toxins that can enter open cuts. For this reason, it is advisable to wear gloves while weeding – and please keep those tetanus shots up to date.

Now, I am not such a purist that I refuse to use glyphosate in all conditions. There are hard-to-conquer weeds, such as Glechoma hederacea, aka Creeping Charlie, a particularly obnoxious member of the mint family, that is almost impossible to pull out. It is also difficult to get rid of Rosa multiflora, an awful weed that can produce 500,000-1,000,000 seeds a year. In the case of Rosa multiflora, I cut its canes (carefully, as it’s quite thorny) before applying glyphosate to the cut portions.

I feel strongly that it behooves us to cut back on the use of chemicals in the garden. Please note that I’m stressing this for gardeners, not for farmers. Farmers cope with many problems — acreage being one — that greatly differ from what we gardeners face.

The glyphosate advertisement advocates reaching for that glyphosate bottle as the first line of defense against weeds while I advocate its use only as a last resort. Assess your weed problem and ask yourself whether you can pull, dig or smother the weeds with layers of newspaper. If you find you cannot control a weed by these methods, then employ chemical warfare very judiciously.

If weeding isn’t your thing, find another hobby. It’s impossible to garden unless you are willing to weed. By all means you can let nature take over but then you won’t have a garden.