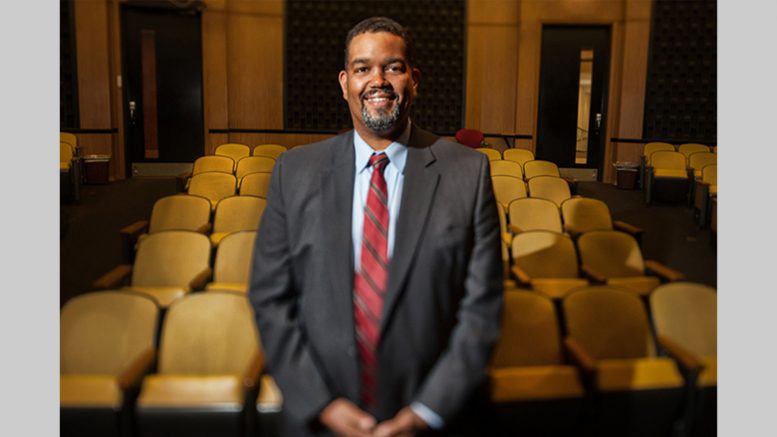 What does it mean to manage a town? Is it even possible? A town would seem, by its very nature, to be unmanageable: too many moving parts, too many moving people. That’s why the job is not for everybody and why, when you get a good one, you can count yourself very lucky indeed.

Chapel Hill is lucky enough to have Maurice Jones. Since 2018 he, along with the mayor and the Town Council, has been instrumental in keeping the fabric of our civic lives in order. Now he is one of the lights that guides us through this (so far) year-long pandemic. He has the experience: for over fifteen years he’s been immersed in city government. He was City Manager of Charlottesville before being hired after a national search to come to Chapel Hill. He also loves his job, which is just the icing on the cake.

But as a boy he had other dreams. At the age of 11 he made the hard and fast decision to become a sports anchor. “TV sportscasters,” he said, “were so cool.” The dream didn’t die. He majored in Communication at James Madison and after an internship was actually hired to be a weekend sport’s anchor in Charlottesville. His favorite food became cold pizza. He got the same job in Columbia, South Carolina, but then found his passions for the profession diminished. Somehow, he was drawn to public policy, politics and administration. He charted a new course, one that finally brought him here.

Maurice and his wife have five children, which apparently makes the job of managing a town seem like a breeze. “There’s a lot more chaos raising five children than there is running a town. In local government there’s a shared vision among staff and elected leadership, and even though it’s a job we all row in the same direction. That is not the case with five kids. They each row in their own direction and we try to keep up.”

Maurice says he wouldn’t have it any other way.

“When I was offered the job of Town Manager for Chapel Hill, my wife’s homework showed us that this would be an ideal place to raise a family. Great schools, climate, sports, and all the amenities that my wife and I hoped to expose our kids too. We were right. It’s a joy to grow with this town and watch our kids thrive.”

When Maurice arrived in Chapel Hill he was immediately confronted with a number of challenges – all town managers are. But without a doubt, responding to the COVID-19 pandemic has been the greatest challenge of them all.

“Growth has come out of this,” he says. “Many of our employees have moved beyond their comfort zones and assisted in areas that were outside of their normal duties and for that I am proud and satisfied. We’ve ensured that the people’s business continues in a safe manner. I also believe COVID has brought about increased collaboration between the Town and our regional partners – Orange County, the Towns of Carrboro and Hillsborough, and UNC-Chapel Hill.”

In North Carolina, effective March 30, Governor Cooper issued a state-wide stay at home order that explicitly allowed localities to issue more stringent orders for their communities. With a reinforcement of local authority from the Governor, Orange County and its three municipalities, Chapel Hill, Carrboro and Hillsborough, issued their own, stronger stay at home order to reflect the local challenges faced by these communities.

“We are not there yet,” he says, “but local government leaders are hyper-focused on navigating this crisis.”

No longer a sportscaster reporting from the sidelines, Maurice is right in the middle of the game. A town manager, in fact, is a lot like being the captain on the floor and requires a brave and steely determination to succeed. So, yes, he faces challenges everywhere, but so far he’s met them all. Supporting the goals and vision of the community is a goal that Jones strives for every day.

What You Should Know About Maurice Jones

Regret: Not trying out for quarterback on my high school football team.

Describe a perfect day. My wife and I actually experienced the perfect day during our honeymoon on the island of St. John. It began with breakfast overlooking Coral Bay, followed by a trip to several of the island’s beautiful beaches, and closed with an elegant dinner at sunset over Cruz Bay.

Most embarrassing moment? One night while I was anchoring sports at NBC 29, I was hit with a pretty vicious case of the giggles and just couldn’t stop laughing. I snickered my way through the entire sports segment. Afterward, I thought my “laughathon” would either endear me to the audience or get me fired.

“Simply put, Maurice Jones is one of those people I am blessed to have worked with at a time when I was Executive Director of the Charlottesville Albemarle Convention & Visitors Bureau and he was Charlottesville’s city manager. As a member of his management team, what I witnessed, above all else, was Maurice’s love of community. He had a strong resolve to break down racial barriers through the “Dialogue on Race.” He led by example, and inspired his managers and city staff to not accept mediocrity; that’s probably why many city departments received national awards for excellence! Maurice is an extraordinary person who relies on his faith, tightly embraces his family, and believes that his calling is to serve others. Chapel Hill is lucky to have Maurice, and I wish him continued success.” — Kurt Burkhart of Destination Strategies Group, LLC and WCHV talk radio host.

Chapel Hill and Orange County, North Carolina: It is Time to Shop

Be the first to comment on "Maurice Jones: Town Manager, Chapel Hill"