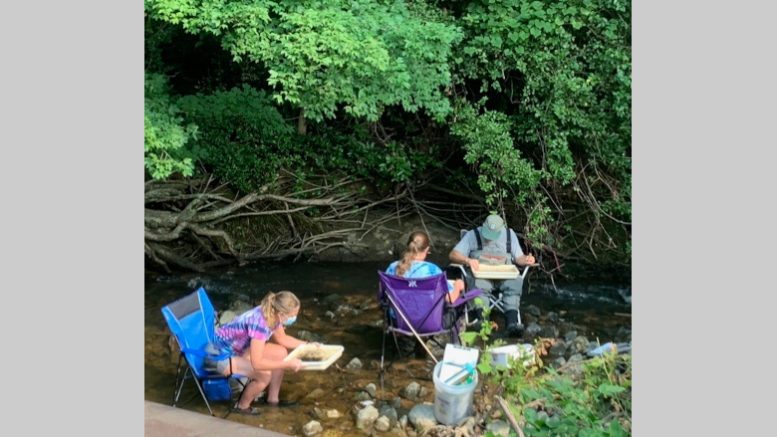 We’re lucky to have almost 20 miles of hiking trails and greenways in Chapel Hill and Carrboro. As the need for distancing and masking indoors continues, I’m discovering more trails closer than I knew.

I had seen folks walking in a beautiful meadow – where 15-501 turns south – and wondered how they got there. A friend clued me in to the parking lot farther down the bypass. Then I found the Chapel Hill Parks and Recreation map here and an interactive map of Orange County trails here.

One recent Saturday morning, my husband and I rode bikes under the cool green canopy of the Booker Creek Greenway, on our way to breakfast at the new Breadman’s on Elliott Road. We passed dog walkers, morning joggers, and moms and dads with strollers. We dinged our bells, called, “On your left” and wished each other good morning as we passed.

Another day I met two friends to walk the much-used Bolin Creek Trail from the Community Center on Estes Drive along the creek to Umstead Park. We met a friendly rescued greyhound named Chloe and her equally energetic owner. They were on their way back from walking to the end of the 2.5-mile trail.

Later, we asked the three people sitting on chairs in the middle of the creek what they were doing. A summer intern from the North Carolina Department of Natural Resources climbed up with a glass vial to show us a fly larva from the stream. She said they were taking samples to test the health of the water.

We felt like part of a community, a community that had the forethought to preserve these beautiful green spaces as the town grows. Greenways began in the 1980s

Bill Webster, “the trail guy,” who recently retired after 40 years with Chapel Hill Parks and Recreation, deserves our gratitude for launching our network of trails and greenways. Our first greenway plan in the mid 1980s was based on Bill’s Master’s thesis. His plan was adopted and expanded on by a Greenways Commission appointed by the Chapel Hill Town Council. Thank you!

We have other forward thinking Chapel Hillians to thank, too. I recently hiked along the wide Haw River with folks from the Mountains-to-Sea Trail (MST) organization. I learned that the 1,175-mile MST was conceived by former Chapel Hill Mayor Howard Lee when he was North Carolina Secretary of Natural Resources and Community Development.

Greenways and trails are good for communities

Our neighbor county to the west also has embraced the idea that trails like the MST and the people they attract are good for their communities. Saxapahaw, the thriving hub of a former textile mill town, is a case in point. We bought picnic sandwiches from the General Store and left town with locally sourced bacon from the Left Bank Butchery. Yum.

Our MST guide said it can sometimes take a decade to create a trail through private land. That helps explain why many of our trails are on public utility easements and in city, county, and state parks.

Back in Chapel Hill, Bill Webster said he was shocked by the initial opposition to his greenway plans. “When the first part of the Bolin Creek Trail was proposed from the Community Center to Elizabeth Street, you’d have thought we were building a Walmart down there.” Homeowners were afraid the trail “would draw crime and take down property values.”

Bill said the second phase, which extended the trail to Martin Luther King Jr. Boulevard, engendered somewhat less opposition. Later, when some of the original trail foes included “access to trails” as a selling point for their homes, Bill knew a corner had been turned: “Now everyone wants us to build more trails.”

You can donate and volunteer

Donations and volunteers are crucial to help create and maintain our trails. Non-profit organizations such as the MST and Triangle Land Conservancy purchase land and develop trails. Two of the TLC’s nature preserves closest to us — Johnston Mill on Mount Sinai Road and the Brumley Family Preserve on Old State Highway 10 — have delightful loop trails.

And we can volunteer to help. For example, you can adopt a park or greenway in Chapel Hill or join an existing team. One weekend a month (September-May), Jeanette Bench (jeanettebench82@gmail.com) and Barbara Driscoll lead volunteers in planting native trees, cleaning out invasive privet and honeysuckle and tending to a pollinator garden on the lower Booker Creek Greenway.

Another team led by Ann and Bill Brashear (a_brashear@bellsouth.net) remove invasives from the old American Legion property (which we hope will eventually become a new town park). Sarah McGill (smcgillmd@gmail.com) and friends remove invasives from along the Battle Branch Trail. They’d all be happy to have more volunteers.

You can also help shape trail policy by serving on advisory boards, such as the Chapel Hill Parks, Greenways and Recreation Commission. They and the Transportation and Connectivity Advisory Board recently agreed on six priority trail extensions (on page E4) with the guiding principal of helping us get around town or to bus lines by walking and biking rather than in our cars.

I hope you’ll get to know our community’s many natural areas and look for ways to help preserve what we have – as well as create more in the future.

3 Comments on "Miles of Greenways and Trails in Our Backyards"