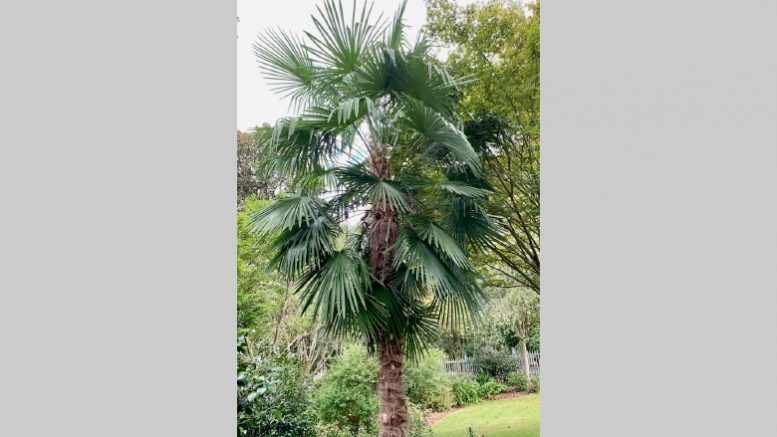 “Let’s write about trees,” Lise e-mailed me. I groaned. You see, as a gardener, I have a love-hate relationship with trees. My reply to Lise was this: “Okay, I’ll write about the trees I have lost and you can write about how good gardeners go about selecting the right tree for the right place before planting it correctly.”

What follows is my tale of tree-woe:

When I first moved into my house 28 years ago, there were so many trees that one could barely see the house. Something had to go — and that something was a number of trees with decaying insides.

Now don’t get me wrong: I basically like trees in their place. After stripping the yard of trees (various hurricanes helped), I went about repainting the palette, as it were, planting trees where I wanted them.

During my need for instant gratification, I discovered a tree provider who specialized in planting large trees. I discovered to my immense glee that windmill palms (Trachycarpus fortunei) could grow well in gardening zone 7 so he came in and planted three six-foot palms in my yard.

Then he planted (at great expense) two weeping cherries that added height to the garden, plus a Japanese maple that has thrived in my front yard. I wish I could tell you that planting large specimens was an unmitigated success. But while it worked some of the time, it failed at other times.

The windmill palms are still alive, but — and this is a huge but — the two-foot specimen I planted two years later is now taller and fuller than either of the three palms that began life in my garden at six feet in height. The one I put in has the same soil and the same sun exposure as the others. It simply decided to get a large growth spurt sometime during its fourth and fifth years in the ground and has never stopped. The moral of the story is that instant gratification made me choose the wrong selection.

Two of the trees I took down were magnolias (Magnolia grandiflora) that had been limbed up by mistake. Never limb up a magnolia as you need the skirts to hide the profuse leaf fall occurring every spring; without the skirts the leaves go everywhere. To replace them I used two large weeping cherry trees, failing to research the trials and tribulations of growing certain cherry trees.

Some of these large plantings have done quite well: the large Japanese maple thrives. Out of the two weeping cherries, one is still alive. The other survived ten years, sometimes missing a season of bloom, until it decided to die with great rapidity.

In my haste, I failed to even note what species of cherry I was establishing in my garden, although now I’m fairly confident it was Prunus subhirtella pendulata. Always know what you are putting in the garden.

Cherry trees aren’t the easiest trees to grow so perhaps a little research on my part would have been in order. I do not regret putting in the windmill palms as I have learned that not only can they survive beautifully in zone 7, they also do well starting out as two-foot high babies, quickly catching up and overtaking the adults in the room.

As for the Japanese maple, it’s a centerpiece in my front yard but it would have done well beginning life in my garden as a younger specimen. I don’t miss the magnolias but I caution everyone who has one to leave those skirts on.

I now suspect my tree follies are a thing of the past as age has overtaken both me and my garden. The garden is full, leaving no more room for any plant, much less a tree. Hopefully you can learn from my mistakes: Do as I say, not as I did.

Back to Basics: The Need for Well-Draining Soil

Be the first to comment on "Misadventures with Trees"