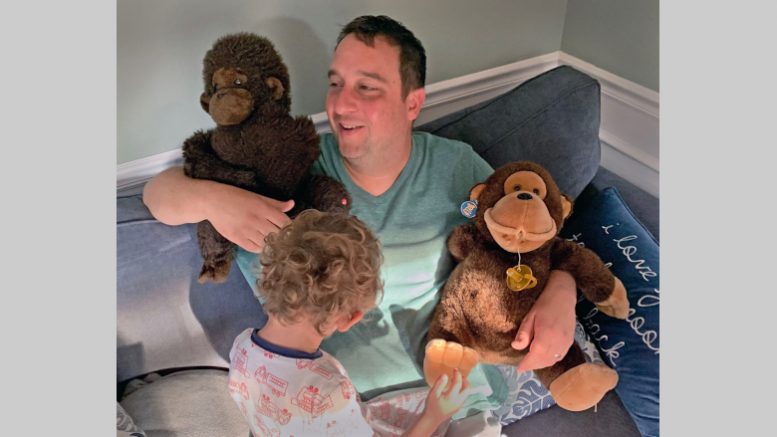 Having survived a close encounter with the Sturgis, S.D., biker throng, stuffed animals Bogey and George made it safely this week to their destination of Coeur d’Alene, Idaho, and back into the arms of their rightful owner, our soon-to-be 40-year-old son, Rob — and were immediately confiscated by the couple’s 3 ½-year-old twins, Avery and Everett.

To recap for first-time readers: our cross-country trip took on a new sense of purpose when we decided to declutter part of our attic by returning to Rob boxes of his childhood stuff, which also included two stuffed animal monkeys, inexplicably name Bogey and George. The pair, almost as old as Rob, led to the journey’s title, “Bogey and George’s Most Excellent Wild West Road Trip.”

As we motored west, B&G became our visual stand-ins for posed photos in front of memorable places along the way: in front of wife Lynne’s childhood home in Cleveland, Ohio; by the banks of Lake Michigan, on the dock beside a Mississippi River stern-wheel river boat, at the base of Mount Rushmore — and finally on to Coeur d’Alene, Idaho, to be reunited with Rob.

So, having successfully passed Bogey and George on to Rob, as we motored west to Seattle, we realized how much we missed our travel buddies and how we needed substitute escorts to get us Back East. Accordingly, we have drafted two likely stand-ins, the little piggy duo of Toot and Puddle from Holly Hobbie fame. Adventurous Toot wants to hit the road, while homebody Puddle just wants to be fireside and in his own bed.

Which neatly encapsulates the yin and the yang of how we both feel after at least 4,000 miles behind the wheel. Writing today from outside Yellowstone, we still have many miles to go before we’re again fireside and in our own bed. But, as my co-pilot said today so well, “What a gift it has been to see the vastness of the West and its stark beauty.”

On to Cheyenne, Wyo., with Toot and Puddle.

Be the first to comment on "Mission Accomplished; Toot and Puddle Take Over"