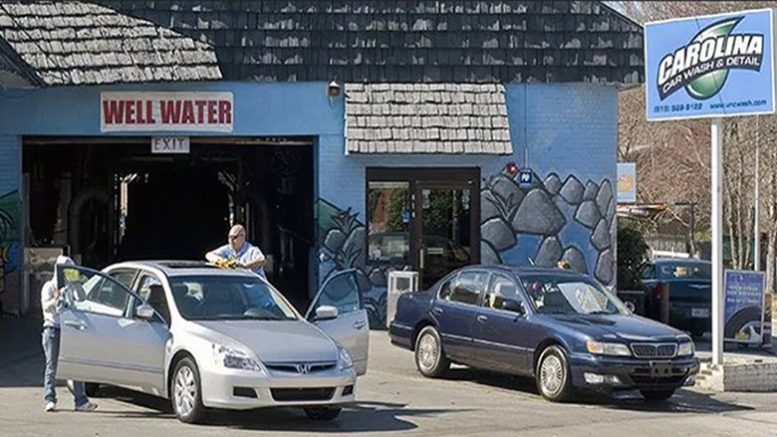 Driving around Chapel Hill it’s impossible to miss the Carolina-blue building at the intersection of Franklin and Main Streets. It juts out like a small peninsula at the precise spot Chapel Hill and Carrboro meet.

This is Carolina Car Wash. It’s a friendly place, one where you can gab with the staff while your car gets cleaned and polished. Some of the old-timers in town remember when it used to be a Buick dealership, but how many know it was the site of the first post-Civil War African American school? Almost no one, but that’s about to change. Carolina Car Wash is a Black-owned business, and that’s thanks to Tom Tucker and his family. An engineering graduate from the University of Illinois, Tom Tucker moved to Cary in 1988, going to work for IBM. His realtor was from Chapel Hill and her love of the town convinced Tom to check out the Southern Part of Heaven for work, worship and community. He purchased the car wash in 1997 and eventually invested in many local properties.

“I’ve worked hard,” Tom says, “but I also believe that it was the community of Chapel Hill that compelled many longtime leaders to help me and others succeed. I got my start in Chapel Hill through the help of George Tate, one of the town’s first black real estate agents. George was good friends with John and Anne Cates. It was John Cates who gave me a loan for $300,000 when nobody else would.”

Through his many contributions, Tom Tucker has made this town a better place to live. But, by fateful serendipity, his ties go even deeper. His car wash is on the site of the first post-Civil War African American School, The Quaker School for Freedmen.

The school was in operation until 1917, when the Orange County school board consolidated it with the original Orange County Training School. The Quaker School for Freedmen, 1916 Senator Ellie Kinnaird and Carrboro Mayor Lydia Lavelle are working with NCDOT and the Carrboro Truth Plaque Task Force to place a commemorative plaque outside the car wash, marking its significance.

Although the Carrboro school site is not yet publicly memorialized, it’s far from forgotten by some of the elders of the local Black community. It’s fitting that the site of the school is now a Black-owned business, and that it sits across the street from St. Paul’s AME church, one of the oldest Black churches in the South. It’s as if history is reminding us who we were by showing us who we are. Tucker said at one time there were a number of Black-owned businesses in Chapel Hill. He says it’s the feeling of community that attract many entrepreneurs and first-time business owners and that it’s important that we work together to maintain a sense of place and pride. Chief Chris Blue counts his Northside work as a special time in his career.

Tom speaks fondly of Sutton’s Owner and former pharmacist John Woodard who has provided many newcomers with helpful resources. And the late Dr. Robert Bashford, a psychiatrist, professor and associate dean at the UNC School of Medicine who helped guide aspiring physicians into pockets of North Carolina where patients struggled to find care. Also Chapel Hill Chief of Police, Chris Blue, who started his career in Northside as part of community policing. “Chief knew the community and he was one of us.”

“Chapel Hill is special because its citizens like to give back and help others. I hope we never lose that philosophy here because it’s what separates us from other communities.”

As the national conversation returns to police brutality and systemic racism, I asked Tom to give me one idea that Orange County might consider as it works towards enhancing its social justice goals.

“I would encourage all of Orange County to implement a summer work internship program that focuses on minorities. Every business signs up for one intern for the summer. Why? It takes a person from the community and plugs them into the community. When kids are walking down the street, businesses then say, ‘Oh that’s Tommy, he worked for me last summer, and what a nice kid he is,’ or, ‘Oh, that’s John, he was our summer intern and the staff just loved him.’ It becomes personal, a real soul, not just a group of kids walking down Franklin Street.”

For a man who credits random acts of kindness and the power of community for giving him sustenance, Tom Tucker walks the walk. He has paid it forward, contributing to the success of so many others the same way he was helped by so many in Orange County. And he doesn’t plan on stopping anytime soon.

“Orange County has been my life for the last 40 years,” he says. “It will always be a part of me.” Be the first to comment on "More than a Car Wash"