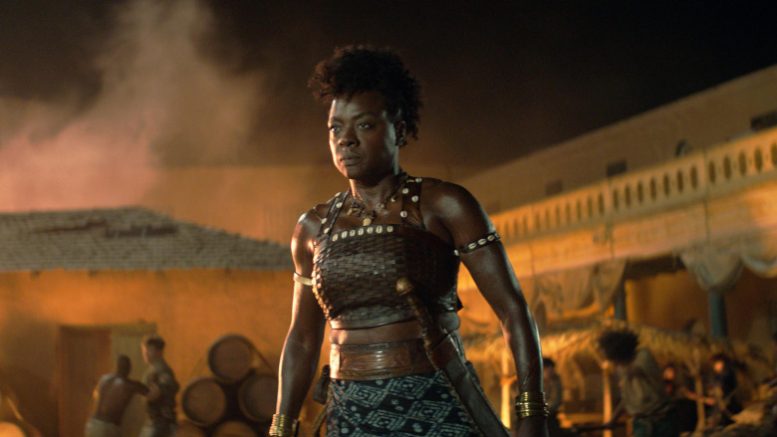 Viola Davis in the Woman King. Photo via Sony Pictures.

Now playing at Silverspot and the Lumina

In a pleasant surprise, this historical epic set in West Africa topped the box office last weekend and has been generating a deafening buzz nationwide. Viola Davis headlines in the true story of General Nanisca, leader of an all-woman warrior army sworn to defend the kingdom of Dahomey, circa 1820. Nanisca’s destiny also includes training the next generation of female fighters.

It wasn’t too long ago that a Black story like this would never crack the mainstream—conventional wisdom being that such films do not make money. Times are changing, thank the gods. Critics are praising Davis’ ferocious performance along with the action sequences and fight choreography. Heads up that it’s a war epic, so the popcorn movie elements are splashed with scenes of blood and grimness. Think Braveheart or Gladiator, but with Black women instead of problematic Australian movie stars.

Opening September 23 at the Chelsea, the Lumina, and Silverspot

Fans of the late, great David Bowie will want to consider this unorthodox documentary, which has been winning praise for its sideways approach to the usual music star biopic.

Director Brett Morgen (Cobain: Montage of Heck) forgoes the usual documentary template: talking-head interviews with famous people saying nice things. Instead, he worked with the Bowie estate to mesh never-before-seen footage and images with an experimental narrative structure. The reviews invariably refer to the effect as “kaleidoscopic.” Trusted sources—my friend John, a serious Bowie acolyte—tell me it’s a must-see for anyone who ever loved the man and his music.

Opening September 23 at Silverspot and the Lumina

This psychological thriller from actor-director Olivia Wilde has enjoyed plenty of advance notice, thanks to some behind-the-scenes drama among the principles—Harry Styles, Florence Pugh, Chris Pine, and director Wilde herself. Check the internet for the weird details.

The premise may be familiar to fans of old-school sci-fi and big-twist thrillers: A seemingly idyllic company town in 1950s America harbors something horrible just beneath the shiny façade. Styles and Pugh play the happy young couple about to discover the nightmare lurking inside the American Dream.

Halloween season is upon us. Those looking for something bloody can swing by the Varsity for the stylish slasher Pearl, a prequel/origin story tied to director Ti West’s earlier horror film X.

On Thursday, September 29, the Chelsea will host the second annual Silent Movie Day with an evening of film history, presented by local alpha cineaste Tom Whiteside of Durham Cinematheque. Check the Chelsea website for details.

Silverspot’s Flashback Cinema series is screening the extended version of Lord of the Rings: Return of the King, September 25 and 28. More Halloween fun starts in October with Trick ‘r Treat.

Watch for some interesting films dropping next weekend, including the dystopian sci-fi fable Vesper and the gay rom-com Bros, from the filmmakers that brought us Bridesmaids and Neighbors. The Chelsea has also booked the surreal art-world satire The African Desperate. Hmm, it’s tricky to characterize this one, better check out the trailer.

Be the first to comment on "Movie Night! African Warriors, American Dreams and Ziggy Stardust"