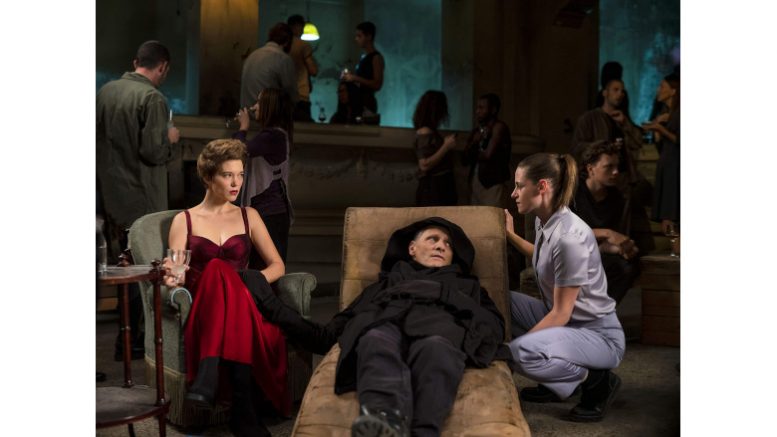 From left: Léa Seydoux, Viggo Mortensen and Kristen Stewart in Crimes of the Future. Courtesy of NEON.

Crimes of the Future

Opens June 3 at Chelsea and Silverspot

Canadian director David Cronenberg makes interesting movies, and by “interesting” I mean “profoundly disturbing.” His films are a lot of fun if you have the stomach for grim sci-fi conjecture and biomechanical body horror.

Cronenberg’s latest film concerns the trajectory of human biological evolution in our increasingly synthetic environments. Basically: What’s going to happen to our internal organs if we keep eating all these microplastics? Viggo Mortensen, always interesting, plays an avant-garde performance artist into spectator surgery and Kristen Stewart is an investigator for the National Organ Registry. Several viewers walked out on the movie at the recent Cannes film festival, but that’s just tradition, really, with Cronenberg. Or maybe marketing.

This throwback from director Chloe Okuno should appeal to film nerds who appreciate 1970s-style European thrillers and Hitchcockian heroines. Set in Bucharest, the story follows a young actress who notices, to her discomfort, that she’s being watched – in her high-rise apartment, in the streets, everywhere. Also, there’s a serial killer on the loose in Bucharest. This is probably not coincidental.

Writer-director Okuno updates an old thriller template with piercing observations about how men look at women, literally – and where and why. The film asks several uncomfortable questions, actually. In light of recent celebrity trials, the film has a certain resonance with he-said / she-said dilemmas and who we choose to believe.

Now playing at Chelsea and Silverspot

For a more traditional, less visceral movie-going experience this week, consider the heartland drama Montana Story, which is earning admiring reviews for its empathetic exploration of childhood trauma and family dynamics.

Writer-directors Scott McGehee and David Siegel (What Maisie Knew) tell the story of two estranged siblings who reunite at their childhood Montana home when their father dies. It’s a story about failed parenting and the damage done, but also about compassion and love and finding a way forward. These are old-fashioned virtues – it can be hard to find a movie like this, these days. In any case, those big Montana skies will play much better on a proper theater screen.

The Chelsea is offering a nice variety of films this week and next. Check out the trailers for the Italian drama A Chiara, the ‘80s punk/sci-fi classic Liquid Sky, the WWI-era Benediction, and the joyful music documentary Jazz Fest: A New Orleans Story.

Be the first to comment on "Movie Night! Body Horror, ‘70s-style Thrillers and Big Sky Drama"