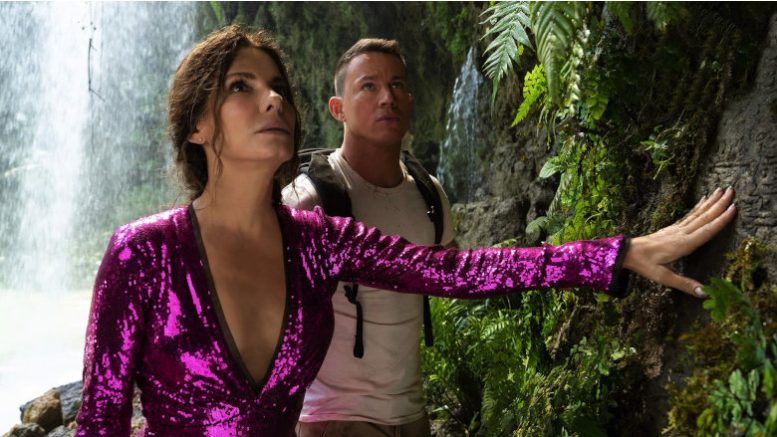 Opens March 25 at the Chelsea

The acclaimed documentary Writing With Fire takes us to the other side of the planet to profile a group of female journalists in India as they ply their trade in severely hostile territory. The reporters all hail from the country’s so-called untouchable caste, and they work in a province notorious for violence against women.

Opens March 25 at Silverspot and the Carraway drive-in

Lost City, a comedy-adventure in the vein of Romancing the Stone, is the kind of date-night comfort movie that used to be a Hollywood mainstay. Sandra Bullock stars as a romance novelist who teams up with Channing Tatum’s clueless male model on a jungle adventure.

Bullock is reliably funny in movies like this, and Tatum is always a good sport when he leans into his dim-bulb beefcake persona. Stay tuned for a Brad Pitt cameo, too. I sincerely hope that The Lost City can draw an audience in the age of COVID isolation and endless streaming media options. This is exactly the kind of movie that plays waaaaay better in a crowd on a Saturday night, when the laughter gets contagious.

The fabulous British actor Mark Rylance takes the lead in this stylish crime drama about an old-fashioned tailor who gets mixed up with Chicago’s Irish mob in the 1950s.

Fans of old-school period thrillers should like this one, which represents an interesting riff on the ancient gangster film template. The official trailer provides a good sense of the film’s style and tone.

The Chelsea has a great selection of other films in rotation right now, including Ascension, Compartment No. 6, The Worst Person in the World and Lunana: A Yak in the Classroom. They’re also queuing up a special 50th anniversary showing of The Godfather next week – check the Chelsea website for details.

Silverspot is screening the blockbuster animated fantasy Jujutsu Kaisen O – concerning teenage sorcerers – in both dubbed and subbed (subtitled) versions. The film was a colossal hit last year in Japan.

On Sunday, March 27, Silverspot’s Flashback Cinema series rolls out director Ridley Scott’s 1982 classic Blade Runner. Sci-fi nerds will want to note that this is The Final Cut version, one of five different edits of the film assembled over the years – and the best one, in my embarrassingly considered opinion.

Be the first to comment on "Movie Night! Courageous Journalists, Jungle Adventures and Stylish Mobsters"