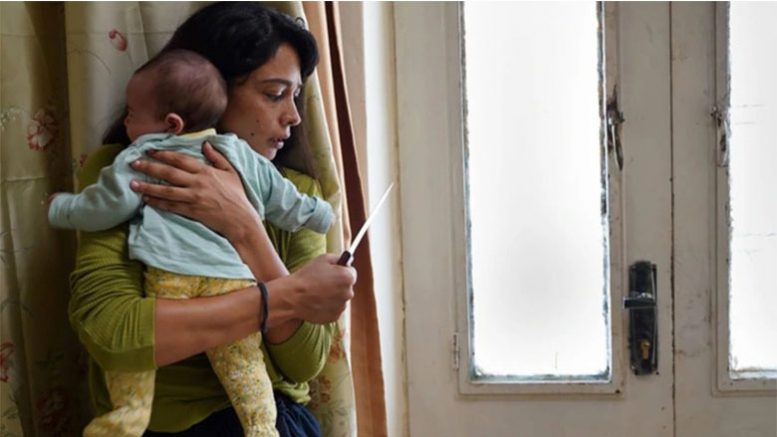 Opens March 11 at the Chelsea

Based on real reports, this political thriller from Palestinian-Dutch filmmaker Hany Abu-Assad documents the harrowing experience of a young Palestinian woman in the Israeli occupied West Bank. When she’s betrayed by an acquaintance, desperate mother Reem (Maisa Abd Alhadi) is forced to work as a spy for the secret police.

Check out the gripping trailer to get a sense of the tone. Director Abu-Assad has been nominated twice for an Academy Award – Paradise Now in 2006 and Omar in 2013 – and his many narrative and documentary films address, in one way or another, the Palestinian people and their plight. Early reviews praise the film’s intensity and performances, and provide some sinister details on the story behind the story.

Now playing at Silverspot, the Varsity and the Carraway drive-in

This latest iteration of the Batman franchise is getting a lot of attention because (a) it’s Batman (b) it stars the preternaturally handsome Robert Pattinson and (c) it’s nearly three hours long. Word is that this new reboot is even darker than director Christopher Nolan’s vision in the last trilogy, which was pretty dark.

If you’re having trouble conjuring the enthusiasm for another superhero movie, I’m with you. But the relentless coverage of the new film suggests that director Matt Reeves (Cloverfield) takes an interesting approach, fusing film-noir elements with psychological depth. If our superhero movies are really examples of modern mythology, and they are, then The Batman is one of those really scary myths that tells us a lot about our own cultural anxieties. Also on the plus side: Zoë Kravitz as Catwoman.

The Piano and Precious

Special screenings at the Chelsea

Chelsea’s Fierce Females in Film series continues with two old favorites that will be nice to see again on the big screen. If you liked The Power of the Dog, consider revisiting Jane Campion’s 1993 drama The Piano, with Holly Hunter and a young Anna Paquin. Next up is director Lee Daniels’ 2009 drama Precious, with Gabourey Sidibe and Mo’Nique.

The Fierce Females series screens on Tuesdays and Wednesdays, this week and next. The Chelsea is also continuing its series featuring this year’s Oscar-nominated short films. Check the Chelsea website for details and screening times.

Starting Friday, Silverspot is showing the Bollywood romantic drama Radhe Shyam, which was filmed simultaneously in two languages, Hindi and Telugu. (Silverspot is screening both versions.) On tap: Love affairs! Fortune tellers! The 1970s! All right!

Also opening this week at the Chelsea, the documentary The Conductor profiles pioneering violinist and classical conductor Marin Alsop. Next week, the Chelsea will open two more Oscar nominated films, Ascension and Lunana: A Yak in the Classroom. Wow, they’re busy over there. All of these intriguing films rather resist synopsis: Treat yourself to the preview trailers linked here.

Be the first to comment on "Movie Night! Fierce Females, Caped Crusaders and Bollywood Blockbusters "