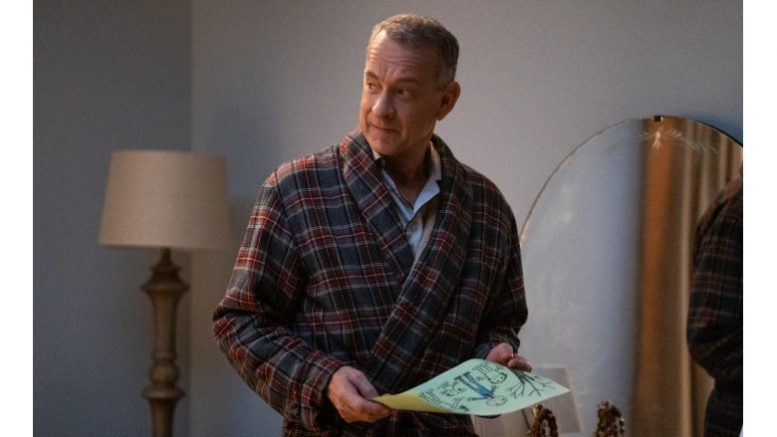 Tom Hanks stars as a grump with a heart of gold in A Man Called Otto. Photo by Dennis Mong, courtesy of Sony Pictures.

Opening January 13 at Lumina and Silverspot

Tom Hanks is one of the last old-school movie stars still standing in our brave new world of streaming services and online everything. The big screen is his natural habitat. Amazingly versatile and famously likeable, he’s good at finding new territories in that vast area between comedy and drama.

Hanks’ new film, A Man Called Otto, is right in his zone. The gist: Otto (Hanks) is a grieving widower in suburban Pittsburgh, the kind of curmudgeon whose grumpy default setting hides a warm and noble heart. Alas, Otto’s world is complicated when a boisterous new neighbor family disrupts his regular routines.

The film is based on a very good novel by Swedish author Fredrik Backman, A Man Called Ove. Apparently, the marketing team has decided that Otto is the American equivalent of the Swedish name Ove. I remember loving the book a lot. It’s about old-fashioned kindness and analog, offline human connection—ideas America could use right about now. Hanks always seems to pick projects that resonate with timely themes (for instance, News of the World from a few years back.) Thanks, pop culture! Thanks, Tom Hanks!

Opening January 13 at the Chelsea and Silverspot

Speaking of human connection, this South Korean drama has been breaking hearts all over the festival circuit for the last year or so. Broker tells the story of a young mother and the grey market “baby brokers” who help her find a loving adoptive family for her child.

You can get a sense of things in the official trailer, which is like a little masterclass on how to outline a premise and tease the storyline without actually giving away the plot. The film was written and directed by Japanese filmmaker Hirokazu Kore-eda, who has said he considers the film a companion piece to his 2018 film Shoplifters. Both explore themes of marginalized people and chosen families.

This weekend, the Chelsea is also opening the French drama Saint Omer, another film about motherhood and pregnancy, based on a true story. The film won the Grand Jury Prize at the 2022 Venice Film Festival.

Silverspot’s Flashback Cinema series presents the original 1993 Jurassic Park (January 15 and 18) and my mom’s favorite movie of all time, Gone with the Wind (January 22 and 25).

B-movie action specialist Gerard Butler headlines the thriller Plane, in which a commercial airline pilot rescues kidnapped civilians after a jungle crash. My guess is that this one won’t be available as an in-flight movie.

LeBron James produces and stars as himself in House Party, a kind of meta reboot of the beloved 1990 comedy.

Lucifer and St. Michael stage a rematch, I think, in the horror-thriller The Devil Conspiracy, which also seems to involve genetic engineering, the Shroud of Turin, and several dozen plot points from other Satanic panic movies. Whatever the case, the trailer is bananas.

If you still haven’t seen the new Avatar movie, or would like to see it again, it’s still playing at Silverspot, the Varsity and the Lumina. Let’s help this modest little indie film make it over the top!

Be the first to comment on "Movie Night! Grouchy Retirees, Korean Imports and Human Kindness"