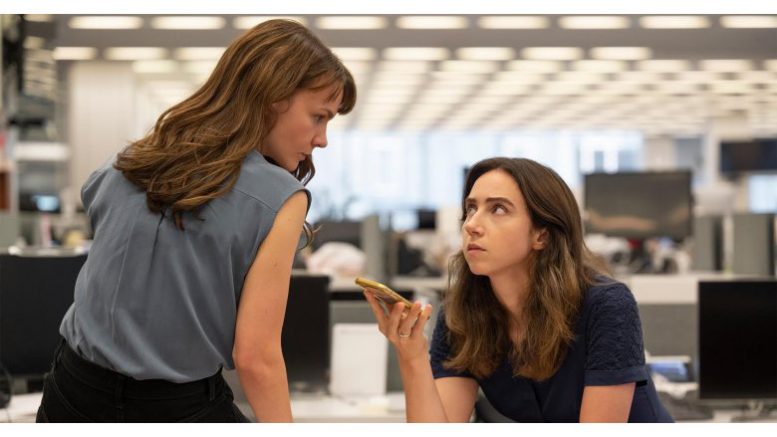 Opening Nov. 18 at the Chelsea and Silverspot

In 2017, New York Times reporters Megan Twohey and Jodi Kantor broke the story of Hollywood producer Harvey Weinstein and his long history of sexual abuse against women. Weinstein’s criminal assaults went back at least 30 years, victimized more than 80 women, and were covered up by a long list of enablers.

It’s a devastating indictment of Hollywood culture and She Said tells the story through the frame of the dogged journalistic investigation that finally brought Weinstein down. Carey Mulligan and Zoe Kazan headline the production, which is based on Twohey and Kantor’s 2019 book of the same name.

Movies about journalists are compelling in general, I find – especially those based on actual events. Consider Spotlight or All the President’s Men. But they have a real resonance these days, when we desperately need truth tellers. Early reviews suggest that She Said is one of the year’s must-see films. Bonus trivia, and this is significant: The film’s principal creative professionals are all women, including director Maria Schrader and screenwriter Rebecca Lenkiewicz.

Opening Nov. 18 at the Lumina and Silverspot

Watch the online trailer to get a sense of the tone here – this may technically be a comedy, but it’s a gruesome thriller, too. Be aware that this is the kind of movie that’s upsetting on the structural level. It’s pitch-black social satire in a tradition that goes all the way back to Jonathan Swift and A Modest Proposal. But if you can stomach the joke—and you’re familiar with terms like mouthfeel—then The Menu looks like a fun, weird, scary movie.

Starting Friday, Nov. 18, Silverspot will be screening Guillermo del Toro’s Pinocchio, the famed director’s stop-motion animation take on the old folk tale. This holiday family film is a Netflix joint and will be coming to the streaming service in December. But with del Toro, you always want to see his visual creations on the big screen if you can.

A significant slate of films will be opening locally next Wednesday, Nov. 23, including Steven Spielberg’s autobiographical drama The Fabelmans; the Knives Out sequel Glass Onion; and Disney’s animated sci-fi adventure Strange World. Also look for the true-story war drama Devotion, with the great Jonathan Majors as a Korean War fighter pilot.

Also on Thanksgiving week, the Chelsea is bringing in the highly regarded U.K. coming-of-age drama Aftersun, the feature film debut of filmmaker Charlotte Wells. Did the preview trailer make me cry a little? No one can prove anything.

Silverspot’s Flashback Cinema series is in full holiday mode, with The Polar Express on Nov. 20 and 23, and the 1954 musical White Christmas Nov. 27 and 30. Bing Crosby! Rosemary Clooney! Good times!

Be the first to comment on "Movie Night! Heroic Journalists, Wooden Puppets and Dubious Menu Items"