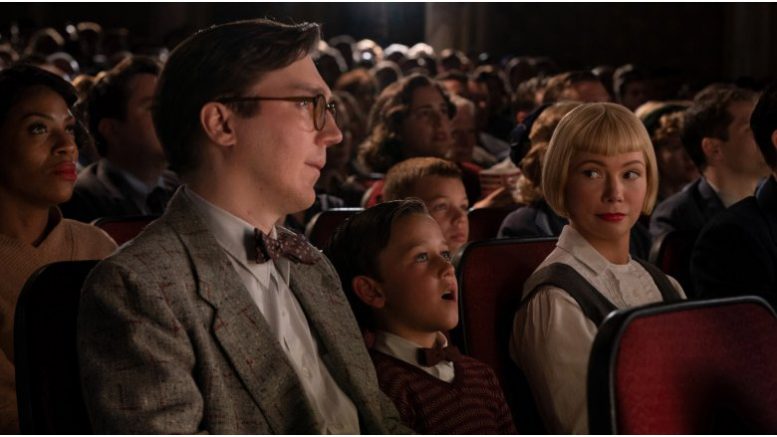 Steven Spielberg tells a fictionalized tale of his childhood—and his parents’ divorce—in the coming-of-age drama The Fabelmans. Photo courtesy of Universal Pictures.

Every other week, our Movie Night! column previews the best upcoming films showing in Chapel Hill theaters—for those who still like to go out to the movies. While COVID remains an issue, all local venues have taken measures to make their spaces safe. Also please remember that bookings and schedules change all the time, so always check online before heading out.

One of the big movies of the holiday/prestige season, this coming-of-age drama from Steven Spielberg is famously inspired by the filmmaker’s own troubled childhood. It’s a fictionalized account, but the director has been candid that the movie is about his formative years, his parents’ divorce, and the way in which that trauma shaped his passion for filmmaking.

The terrific young actor Gabriel LaBelle plays teenage Sammy Fabelman, aspiring filmmaker, with Michelle Williams and Paul Dano as his parents, who are slowly and painfully drifting apart. Spielberg leavens the heaviness with hugely entertaining sequences of Sammy making his first short films in the 1960s, using the family 8-millimeter camera. These shorts are based on the actual movies Spielberg made as a kid with his high school buddies.

The Fabelmans isn’t among Spielberg’s best storytelling, but it’s a serious piece of filmmaking and a pretty good time at the movies. At this point, Spielberg is probably incapable of making a truly bad film, and, anyway, his crowd-pleasing instincts remain impeccable. The story is sad and moving and sometimes very funny. If you’re in the market for another movie like this—revered filmmaker looks at his teenage years—seek out director Mike Mills’ 2017 film 20th Century Women.

Opening Dec. 2 at the Chelsea and Silverspot

Discerning horror fans should appreciate this holiday counterprogramming initiative. Nanny tells the story of a Senegalese immigrant (Anna Diop) who takes a job caring for the child of a wealthy white family in New York City. As you might suspect, things get weird. The film is getting good reviews for its cerebral, cross-genre approach to the scary movie genre. Is this a psychological thriller? A domestic drama? A paranormal freakout? The answer is yes!

Writer-director Nikyatu Jusu is also earning praise for bringing rich characterization and African storytelling traditions to a familiar genre template. In fact, Nanny is the first horror film to win the Grand Jury Prize at the prestigious Sundance Film Festival.

The film will have a quick run in theaters before it migrates to streaming on Amazon Prime, starting Dec 16. But remember that horror movies are usually better in a theater. There’s always a chance that a jump scare moment will cause someone’s popcorn to go flying. That’s always fun.

On Dec. 9, the Chelsea will open the indie film The Inspection, based on the true story of a young volunteer who faces down violent homophobia at U.S. Marines boot camp.

If you need a good popcorn movie for visiting relatives, Black Panther: Wakanda Forever is still in theaters, including The Varsity downtown.

The Lumina is holding over Black Panther, too, along with Strange World, Devotion and The Menu.

Silverspot’s Flashback Cinema series remains in holiday mode with screenings of Elf on Sunday, Dec. 4, and Wednesday, Dec. 7, then Albert Finney in Scrooge (1970) on Dec. 11 and 14.