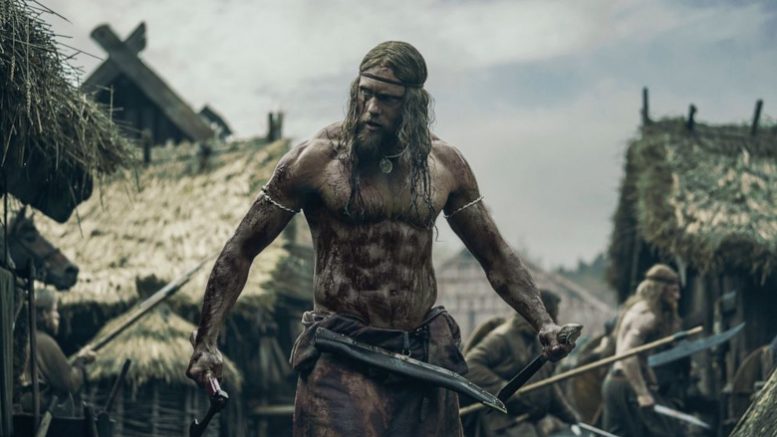 Opens April 22 at the Chelsea and Silverspot

Director Robert Eggers (The Witch, The Lighthouse) is known for his exacting and disturbing historical period piece films, which blend rigorously detailed production design with elements of the supernatural.

It’s a heady combination and Eggers’ films can border on the hallucinatory. His new film The Northman, based on Norse legend, concerns a violent power struggle among Viking groups in 9th-century northern Europe. I guess you’d call it an action epic, technically, but Eggers works on a different frequency than most filmmakers. His images tend to go right to the brain stem and evoke powerful, almost primordial emotional states. It’s modern folklore, in a way, and it’s really something.

The cast is a wild collection of talent, too: Lead Alexander Skarsgård is joined by a motley crew including Nicole Kidman, Ethan Hawke, Willem Dafoe, Danish superstar Claes Bang, and Icelandic musician Björk Guðmundsdóttir as an eyeless seer. Can’t argue with that.

The Unbearable Weight of Massive Talent

Starring Nicholas Cage as “Nick Cage,” this meta exercise from director Tom Gormican is so weird it just might work. Cage stars as a fictionalized version of himself, a washed-up actor who reluctantly accepts an invitation from a billionaire fan to attend his birthday party.

Things go sideways, Cage gets entangled in a CIA plot, and then riffs on his various roles and personas to get out of the jam. Again, it’s technically an action pic, but the conceit is so strange and 21st century that the movie is interesting before it even begins. If you’re a Nicholas Cage fan, anyway. This might be the first mainstream feature film to fully embrace meme culture and its endless mirror tunnel of irony. I’m in!

Everything Everywhere All at Once

Now playing at the Chelsea and Silverspot

Everything Everywhere is getting ecstatic reviews for its performances, martial arts choreography, and wildly unhinged take on what the modern feature film can accomplish. The film is also a kind of funhouse mirror of our current sociopolitical climate, in which multiple versions of reality compete for our attention and the truth is, apparently, whatever you want it to be.

On Tuesday and Wednesday, April 26 and 27, the Chelsea will screen the short films The Uncommon Garden and Aldwyth: Fully Assembled, both by acclaimed documentarian Olympia Stone, who specializes in films about art and artists. Stone’s production company, Floating Stone Productions, is based in Chapel Hill. The Tuesday night screening will feature an introduction by the filmmaker.

For a different kind of double feature experience, Chelsea’s Kino Korner series will screen the dark Japanese drama A Snake of June along with the French neo-noir Demonlover, on Thursday April 28. Heads up that these films are for adults. Themes include, oh, repressed sexuality, 3D pornography, sadomasochism, this sort of thing.

Harry Potter fans looking for their fix in downtown Chapel Hill will be happy to see that the Varsity theater is still showing The Secrets of Dumbledore, the third installment in the Fantastic Beasts series.

The semi-active Lumina Theater in Southern Village is ramping up its summertime outdoor movie schedule again, with upcoming dusk screenings of classics like Tangled, Frozen and The Lion King. Check the Lumina’s webpage or Facebook page for updates.

The Drive-In at Carraway Village is still closed for renovations but plans to reopen in early May with Marvel Studio’s Doctor Strange in the Multiverse of Madness.

Be the first to comment on "Movie Night! Vikings, Nicholas Cage, and the Multiverse"