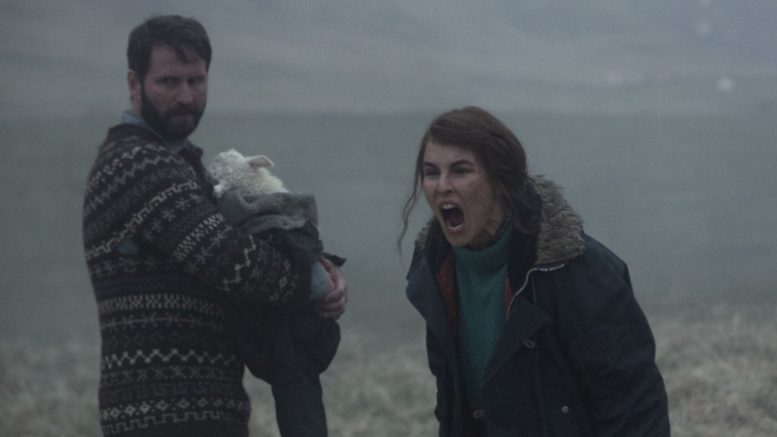 Movie still from the film Lamb. Courtesy of A24.

With streaming video, subscription services, and digital everything, it’s easy to stay home, veg out, and queue up a movie or TV show.

But for those of us who still value the hallowed tradition of Going to the Movies, the cinema is still a magical – dare we say sacred? – kind of experience. Seeing a film on the big screen requires and rewards your attention. At a good theater, with a good movie, you have a chance to be transported.

We also hope to highlight any interesting open-to-the-public screenings on campus at UNC, and anything else that might pop up. Covid complicates any decisions about going out to the movies, of course, but bear in mind that all local venues have taken measures to make their spaces safe.

Also please remember that bookings and schedules change all the time, so always check online before heading out.

Lamb
opens Oct. 8 at the Chelsea

Halloween is almost here, and if you like your scary movies with European vibe, this supernatural thriller from Iceland looks like good, weird Nordic fun. A childless couple welcome a newborn lamb to their modest farm, which works out nicely – until it really, really doesn’t.

Lamb is the kind of movie that trades in old-world spookiness (think The Witch or Midsommar) and relies on the undeniable fact that sheep can be remarkably creepy. The film premiered to good reviews at the Cannes film festival and indie studio A24 has a solid track record with these kinds of artsy, horror-adjacent initiatives. Plus, Noomi Rapace (The Girl with the Dragon Tattoo) has the lead role, and she’s always interesting.

The Lost Daughter
special screenings Oct. 20 and 23 at Silverspot

Chapel Hill’s own Film Fest 919, now in its fourth year, is back and hosting an impressive slate of top-shelf films at Silverspot and the Caraway Drive-in, from Oct 18 to 24. This annual event is a great opportunity to see films on the festival circuit before they officially open (or cycle onto streaming services). Check the festival website for times and ticket information.

The Lost Daughter, adapted from the novella by the mysterious Italian author Elena Ferrante, is the directorial debut of actress Maggie Gyllenhaal. Tagged as a psychological drama, it stars Olivia Colman as a woman who becomes obsessed with a younger family, triggering flashback memories of her own experience with motherhood. Reviews have been particularly enthusiastic on this one.

The Rescue
Opens Oct. 15 at the Chelsea

From the filmmakers behind the Oscar-winning Free Solo documentary, The Rescue is the kind of film you want to see on the big screen – if you want to see it at all. Claustrophobics may want to opt out. The film chronicles those incredible events in the summer of 2018 when a youth soccer team got trapped in a flooded cave complex in Thailand.

As they proved in Free Solo, filmmakers E. Chai Vasarhelyi and Jimmy Chin are the undisputed masters of nail-biting, gut-churning nonfiction cinema. The Rescue features hours of archival video from the rescue operation, plus never-before-seen helmet-cam footage and some seriously detailed 3D renderings of the cave complex.

If his previous work is any indication, director Mike Mills (Beginners, 20th Century Women) is constitutionally incapable of making a bad movie. His latest, C’mon C’mon, is a black-and-white drama starring Joaquin Phoenix as a radio reporter who bonds with his nine-year-old nephew on a cross-country trip.

Advance word suggests that Phoenix is actually likable in this story, so that will be a nice change. Also, NPR nerds will note that real-life reporter Molly Webster from Radiolab has a supporting role. This special advance screening is also part of Film Fest 919’s lineup; the film will circle back again in November.