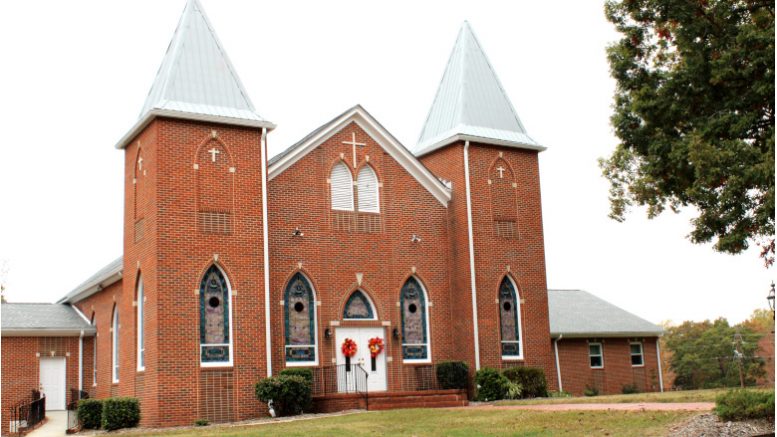 Shouts of “Amen!” and “Praise God!” sounded above powerful Black voices singing gospel choir music at the Mt. Zion Missionary Baptist Church in Chapel Hill on Sunday afternoon. The congregation clapped hands with the beat of tambourine and drums. People swayed in rhythm with the soulful Christian hymns, babies cried and toes tapped as the joyful celebration took place.

Nov. 20 marked a special day as this local Baptist church’s members gathered to honor their pastor, Rev. Larry McCray Neal, who has served their congregation for 10 years. The other cause for celebration is ongoing because the church is now 169 years old, establishing it among the oldest historically Black churches in the area. An anniversary celebration was held this past September.

“We have a wonderful church community and have been so blessed to be worshiping on the same land where our ancestors held services in the brush arbors in 1853 below the rock wall of our church,” said Roxie Edwards. “We have been particularly honored to have Pastor Neal as our spiritual leader for all these years.”

A brush arbor meeting was a worship service that took place under an open-sided shelter. It was usually constructed of vertical poles driven into the ground with additional long poles laid across the top as support for a roof of brush, cut branches or hay. During days of slavery in the South, slaves would hold secret worship meetings in secluded places in the brush arbors, sometimes known as “bush arbors,” “brush harbors” and even “hush harbors.”

Mt. Zion Church traces its roots back to the early 1800s when Rev. E.H. Cole built the brush arbors, with a small wooden structure erected later, according to church history records. One early date mentioned in historical retelling, 1807, was not physically recorded.

The “Cornerstone Date” of 1853 reflects the earliest point in the 1853-1867 period the church could determine congregations–Black, White and biracial–were forming in the area. The date was enshrined in the cornerstone that is now part of the brick-and-mortar church. In the church’s written compilation of its history, there is speculation that 1853 may have also been the year the first congregants chose the Mt. Zion name. Rev. Larry McCray Neal and his wife, Patricia, are pictured with their children, Hailey and Logan. Rev. Neal was honored by his congregation at Mt. Zion Missionary Baptist Church this past Sunday for his 10 years of service there. Photo by and courtesy of Marilyn Chaplin.

After Neal served in the North Carolina Army National Guard for 35 years, he retired from the military in March 2020. During his service, he took part in several stateside missions and two tours in Iraq.

“It comes down to love. Love your neighbor, your fellow human beings. Seek God first and He will always be there for you,” said Rev. Neal to his grateful congregation.

The celebrated pastor also had an opportunity for fatherly joy when his son, Rev. Neal II of the Merry Grove Missionary Baptist Church in Zebulon, North Carolina, gave the sermon.

Be the first to comment on "Mt. Zion Missionary Baptist Church in Chapel Hill Overflows With Gratitude"