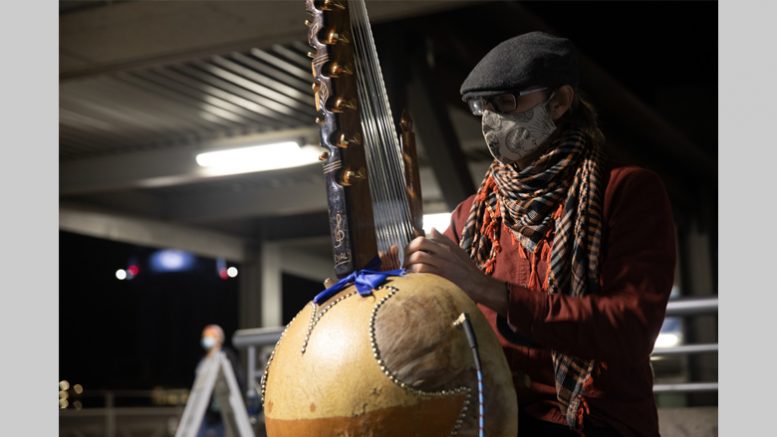 Will Ridenour, of DooR to Door, plays the kora on the walkway at UNC Hospitals. Photo BY Landon Bost.

A hospital offers a glimpse into the best and worst parts of the human experience.

DooR to DooR is a program at UNC Hospitals that infuses the arts with medicine to provide holistic healthcare to patients, and to brighten the days of staff and family members.

Will Ridenour, who plays the kora, a West African string instrument, has been a DooR to DooR performer since 2015 and says that playing at a hospital is both rewarding and difficult.

The coronavirus pandemic has perched Ridenour and his fellow artists on the second-floor walkway in between the cancer center and the Dogwood Parking Deck. DooR to DooR artists perform from 6:30-8 p.m., the time when nurses come to and from their 7 p.m. work shifts.

Anita McCauley, a driver for the car park, joined the hospital staff this fall. According to McCauley, who considers herself a music connoisseur, the performances by DooR to DooR artists help get her through the night.

“My mom’s actually going through a lot,” McCauley said, “and when she was in rehab, they came in with the music. You could just really tell a difference in her mood and her attitude. So, it’s very therapeutic to have music, especially right now with these times that we’re dealing with.”

Program coordinator Joy Javits, a local resident who started DooR to Door at UNC in 1991 after being part of a similar program at Duke Hospital, has worked with more than 300 artists — including caricaturists and poets — over the past three decades.

“[The performances] perks up [people’s] day,” Javits said. “It brings the outside world into their room.”

On Oct. 15, Jonathan Cox woke up at 2:30 a.m. to make the two-and-a-half-hour drive from Northampton County to UNC Hospitals for a major surgical procedure on his 11-year-old daughter.

Cox seated himself on the bench near where Ridenour was playing the kora, and recorded a video of the performance for his daughter.

“Her surgery was very successful today,” Cox said. “Then I come out and I hear [Ridenour playing]. Maybe it’s a sign of a higher power and saying just relax, take a minute to sit down and relax. You made it this far, and everything’s going to be fine.” Cox has been a musician himself and has played in and out of churches. He and Ridenour had a brief conversation about the kora, which is played by the Jeli people of the Mandé region in West Africa, whose ancestors date to the 12th century.

“Sometimes you form a personal relationship with a stranger when you’re here doing this, and when you’re in the hospital playing for patients,” Ridenour said. “It just gives me a beautiful feeling.”

At first, Cox thought that Ridenour was a random musician playing in a parking garage, but he was surprised when he learned that it was part of a program provided by the hospital.

“It really means a lot,” Cox said, “because where I’m from, the doctors really aren’t that involved with the patients.

“When we come up here — the doctors — they treat you like family. And to see that they’re actually taking the time to do [DooR to DooR], it really means a lot and it makes you feel special.”

DooR to DooR will stop live performances on the walkway Nov. 1, as the weather turns colder and it becomes difficult to perform. Instead, they will create a video of multiple artists performing and it will be put on a hospital TV station.

According to Javits, DooR to DooR might come back for a couple of holidays — and if the performers can’t return inside the hospital, because of the pandemic, they will return to the parking garage in March 2021.

Javits said that she wants to expand DooR to DooR to other hospitals. The program is also at the UNC Hospitals campus in Hillsborough and at WakeBrook in Raleigh.

Ridenour said that it’s important that DooR to Door continues at UNC Hospitals.

“Music is a type of medicine,” Ridenour said. “We all love different music. And when we hear music that strikes us deep inside, it’s like a form of medicine and can make us feel a lot better.

“We use that in conjunction with all the medicine that people are receiving in the hospital. Just makes for a more robust system of care.”