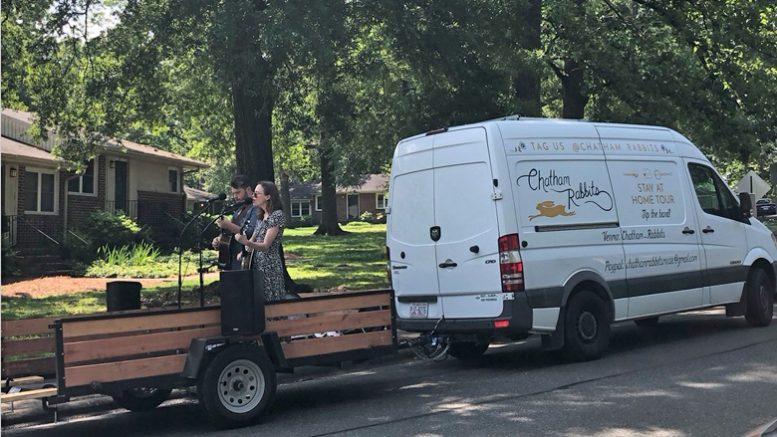 It is highly unlikely that we will be going to concerts or festivals anytime soon. These kinds of events are missed, however, so when Chatham Rabbits (www.chathamrabbits.com) showed up in the Glen Lennox neighborhood on a recent Sunday morning it was great fun, and a welcome distraction from the long stay-at-home days we’ve experienced over the last two months.

The Chatham Rabbits are a duo of Sarah (playing banjo) and Austin (playing guitar) McCombie. They present a wonderful and mellow mix of folk, bluegrass and country music, and have opened for groups as well-known as the Steep Canyon Rangers.

Up to mid-March, they had a full concert and tour schedule laid out for the spring and summer, including the famed Merlefest. Like many professionals these days, however, musicians have run into a brick wall of cancelled events, and a highly threatened livelihood. For these musicians it is clearly more than money that drives them to their craft, so no income and no performances became a “double whammy” for the Chatham Rabbits.

Enter the creativity that artists instinctually have.

Normally musicians’ creativity is used for crafting music, but in this case Chatham Rabbits’ creativity has provided a way for them to play music, be of service to others and make at least a little tip income to cover their expenses.

Their current “Stay at Home Tour” (www.chathamrabbits.com/stayathometour) started out as a brainstorm, but has turned into a very welcome, socially-distanced street concert for local neighborhoods. Using their van and small flatbed trailer, Sarah and Austin have been visiting neighborhoods around the Triangle, driving around, playing music and telling stories. There were some of us that followed them from one location to another, by foot and socially-distanced, carrying our lawn chairs with us. Others came and went along the way, and others appeared at their doors, curious about the music they were hearing on the street.

It was reminiscent of the effect ice cream trucks had many years ago, bringing people (mostly kids!) out of their homes with distinctive music as the trucks drove around the neighborhoods.

So, for our safety and the safety of others, we won’t be going to folk or bluegrass concerts anytime soon. But that morning, sitting in the shade in lawn chairs and listening to the mellow and welcoming music of Chatham Rabbits, we were able to capture some of the feeling.

Thanks to Sarah and Austin for the visit, from everyone in the Glen Lennox neighborhood.

John E. Paul is a resident of Chapel Hill.