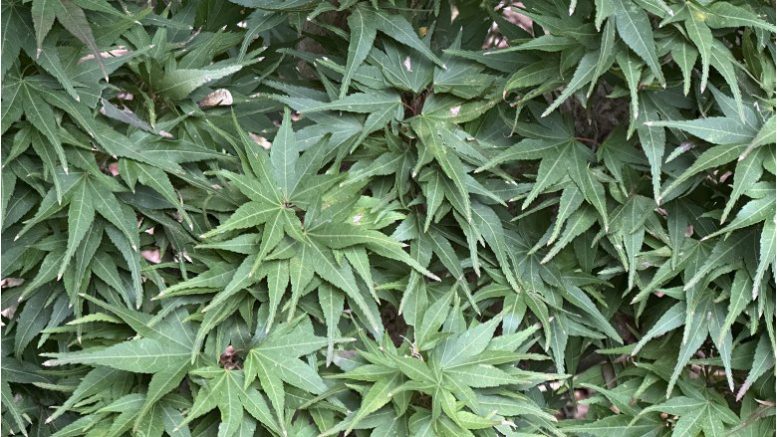 The overlapping leaves of this Acer palmatum “Mikawa yatsubusa” are wondrously lush and will turn a brilliant reddish-orange in November. Photo by Kit Flynn.

The most expensive purchase of a plant to go into my garden was a Japanese maple over ten years ago. “What?” you say. “Aren’t Japanese maples reasonably priced?”

At a time when I haunted nurseries, as I still had room to fill in my garden, I spotted an intriguing small Japanese maple, potted up in a corner—and looking very lonely. I then looked at the price tag and gulped: $389. Remember, this was at a time when $389 was really $389 and not an inflationary $389.

I went back to look at it five different times. Each time it appeared lonelier and lonelier until I finally succumbed, taking it home with great fear and trepidation. Would I be able to give it a good life? This is no small consideration when vast sums of money change hands (okay, I exaggerate, but it was at that time a lot of money).

Several things intrigued me about this particular Japanese maple: Its leaves were piled on top of one another and it didn’t look like any Japanese maple I’d ever seen. I’d never come across a Japanese maple that produced so many leaves per square inch. The other appealing aspect of Acer palmatum “Mikawa yatsubusa” was that while it wasn’t going to get huge, it had a strangely appealing irregular shape.

That spring we gave it a lovely home where it had plenty of morning sunlight but received some relief from the broiling afternoon summer sun. I watered it well every time I saw it, which in my paranoia, was often. It didn’t do much, but then it didn’t lose leaves prematurely so I remained hopeful.

The second growing season I saw that it was happy so I reduced the watering—and then it began to grow. It was supposed to top six feet maximum but, in its happy state, has now soared to a good ten feet—and is still growing. Overlapping in a wondrous fashion, the leaves turn into a brilliant reddish-orange in late November when the garden is looking a little peaked. In its way, this Acer palmatum has turned into a real showstopper. This Japanese maple, Acer palmatum, loved its new home so much, it soared over its usual maximum height of six feet to what is now easily ten. Photo by Kit Flynn.

Now, I was lucky. I made a splurge on impulse, knowing very little about this particular Japanese maple, although I realized that Japanese maples are not very difficult to grow in the Piedmont. I also bought it from an established nursery, one that I trusted. Good nurseries purchase plants or grow ones that they can recommend to their gardening public, i.e., plants that are suitable for a particular gardening zone.

The big box stores have a different philosophy. Their buyers order plants from regional sources, so some of those plants are not appropriate to our area. An example of this is the profusion of Oriental lilies that appear on the shelves in the spring. Oriental lilies prefer cool nights, something we cannot offer, whereas the Orienpet lilies (hybrids arising from a marriage between the trumpet and Oriental lilies) fare quite well here.

Another problem with the big box stores is that the growers are paid for only those plants that sell. Naturally, many of their plants are juiced up with fertilizer in order to force the plant into bloom, thereby enticing the customer. Now, this is not an anti-big box screed—it simply is wiser to know that someone in the general office is doing the ordering without taking our climatic demands into account and that growers are pushed to sell their plants any way they can. After all, their season is quite short—I’m very sympathetic to their plight.

What I also realized when I bought “Mikawa” was that I was attracted to it because it was unusual. I loved the free form shape while the leaf formation fascinated me. The fall color was an added surprise but was not included in the reason for the purchase.

In my garden I have some unusual plants, such as Euscaphus japonica (the Korean Sweetheart Tree) that I have written about, and at least eight palms scattered throughout. This has made me acknowledge that shape, form and diversity of silhouette are extremely important to me, that I have an urge to break up the monotony of small-leafed round shrubs.

We all garden with different garden esthetics in mind. Just because I like different structures while eschewing the round sameness of boxwoods doesn’t mean that you should. What I want to see are gardeners who have the courage of their own convictions. Too often we think we must follow the leader in garden design. Rather, I think, it’s more beneficial to sometimes think outside the box.

I have to add that I’m very pleased that this expensive impulse buy worked out so well. I’ll say it again: I was very lucky.