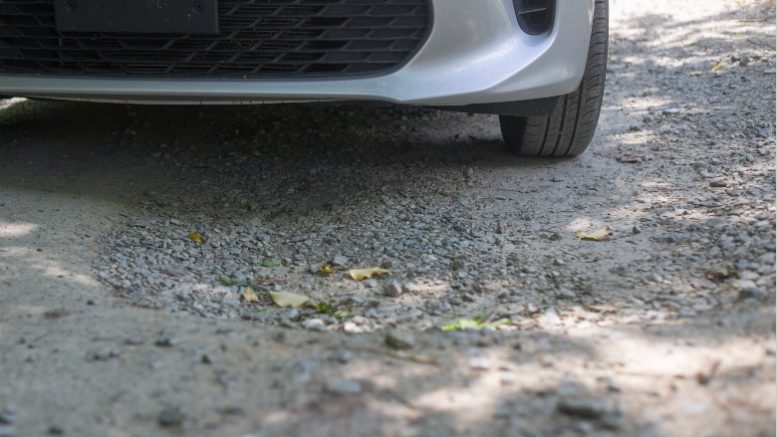 $3.4 billion. That’s how much bad roads and congestion in North Carolina costs its drivers in higher vehicle ownership costs, according to a report commissioned by the North Carolina Department of Transportation.

Fixing those roads — as well as repairing and replacing bridges, building new highways and any other large projects the NCDOT has on its schedule — takes money, and lots of it. Steve Abbott, a spokesperson for the NCDOT, said that to bring every bridge in the state to “good” condition would cost $3.8 billion, roughly 71 percent of the department’s $5.3 billion budget for the year.

The lack of funds has caused a backlog of infrastructure projects, many of which won’t be addressed for years.

“We have our wish list [with] thousands of projects,” Abbott said. “While you can’t afford your wish list, you have to operate just like a household. You want to do all-new-this, all-new-that, new roof, you want to put a pool and you want to have all replacements. Well, you don’t have that in your budget, so you decide OK, this year we’re gonna do this, this, this. Next year, we’re gonna do this, this and this. And that’s the same thing we go through basically.”

That’s why a combination of different stakeholders, including the NCDOT and business advocacy organizations, are coming together to try to change the funding for the NCDOT — not just in the amount given by the state legislature, but in where its funding comes from in the first place.

“How do we reform this for the long term, so that we don’t have to come back every year and advocate for the projects that are being backlogged or the maintenance that’s being deferred?” Mark Coggins, director of government affairs for the N.C. Chamber of Commerce, said.

The problem, as groups like the N.C. Chamber see it, is that the largest source of the NCDOT’s budget comes from the motor fuel tax — 36.1 cents per gallon — and accounts for 54 percent of the total NCDOT revenue. As inflation grows and cars get more fuel efficient, the comparative purchasing power of that tax gets smaller and smaller.

The result is that drivers who pay less for gasoline aren’t chipping in money to the Highway Fund comparable to the damage their vehicles cause the roads.

“Probably the big change that we will see is [from] Amazon’s commitment to go all electric. You think about the amount of wear and tear on the roads, it’s significant,” said Nancy McFarlane, former mayor of Raleigh and co-chair of the NC FIRST Commission.

“The other is because our revenue is based on gasoline tax; our gasoline prices are substantially higher than the surrounding base, especially Virginia and South Carolina. So, for interstate traffic, especially truckers that are going down the coast, they’re going to fuel in South Carolina. So, vehicles that are doing the heaviest damage to our roads are not paying for the repair.”

The NC FIRST Commission was created in 2019 as a 13-member commission charged with evaluating the state’s transportation investment needs. Its January report called for a shift in funding for the NCDOT, away from the gas tax and toward something more equitable and sustainable, along with a $20 billion increase in funding for the department over the next 10 years. The COVID-19 pandemic has underlined the necessity of finding a source of funding less reliant on the gas tax. As vehicle travel dropped by 38 percent in April 2020, the money going into the Highway Fund cratered, causing the NCDOT to delay or remove approximately 700 projects.

The pandemic also exacerbated a trend of increasing e-commerce deliveries from companies like Amazon. Freight trucks used for shipping can cause the equivalent damage to roads and highways as 5,000 cars, while also increasing congestion in urban areas with an increase in “last mile” trips to deliver products to customers. The increased traffic isn’t paying for its cost though, due to the fact that many of the “last mile” trucks used are smaller and more fuel efficient, offsetting the benefit they may have brought with their traffic through the fuel tax.

Driving, and the department’s funding, have since rebounded to close to pre-pandemic levels, but Abbott said that the massive drop in funding underscored why it’s so important to have a more sustainable source of revenue.

The proposed solutions to funding include short term options such as increasing the highway use tax — the tax on purchasing vehicles that is now 3 percent — putting more sales tax money earned from transportation goods into the highway fund and increasing the DMV fees on electric vehicles. Long-term solutions include implementing a mileage-based user fee for drivers, more highway tolls and removing the limit on private-public partnership projects for infrastructure projects.

The business groups advocating for a change say that having a well-funded transportation department and good infrastructure will be a key advantage to bringing economic growth to the state.

“Transportation is a competitive advantage for us because our congestion numbers, and not just during the pandemic, that consistently ranked far below what we would normally be for a market of our size and growth rate,” said Joe Milazzo, the executive director of the Raleigh Chamber’s Regional Transportation Alliance.

The RTA supports several of the proposed measures, including replacing the motor fuel tax with an increased vehicle fee or an access fee. Milazzo says that while the transportation network around the Research Triangle has been an advantage, the RTA wants to make sure that rate of investment into transportation grows as the population of North Carolina does. The state is unique for the number of roads it’s responsible for — despite being only the 10th most populated state, North Carolina has the second most state-managed roadways, some 80,000 miles. That means while North Carolina spends a large percentage of its total expenditures on transportation — about 13.3 percent — it’s actually spending far less money per mile of state-owned roadway than comparable states like Florida and Georgia.

The high base numbers already spent on transportation means that it may be difficult to funnel even more money into the system, despite calls for more.

“There’s competing priorities for the funding, particularly as we’re starting to pay for things out of the general fund,” said Noreen McDonald, a professor of city and regional planning at UNC-Chapel Hill. “So, is repairing the roads more important than improving our childcare system? If we care about economic productivity, it’s very debatable.”

North Carolina may get a boost to its transportation network in the near future, thanks to President Joe Biden’s $2 trillion infrastructure proposal, which would allocate $621 billion to spending on transportation infrastructure, including $115 billion for repairs and modernization. The NCDOT has already identified 10 federal aid projects to the Raleigh News & Observer, which are planned to start in the next several years.

But given that the final amount North Carolina will receive is dependent on Congress, Abbott said the department won’t be making any plans around a large influx of federal aid for the foreseeable future.

“Who knows when it’s going to come out,” Abbott said.

The fear among the NCDOT and business advocacy groups is that, as construction costs rise and funding from the fuel tax starts to dwindle, North Carolina might not have the resources to stay in front of the need for major full-scale renovations. Coggins cited a statistic on a report that found that every $1 of deferred maintenance on roads and bridges will end up costing an additional $4 to $5 in needed future repairs, meaning needs delayed because of a lack of funds will only get increasingly more pressing and expensive with time.

“I don’t know that we truly know the economic impact or the consequences of inaction,” Coggins said. “But I can tell you that North Carolina will not grow as fast as if we do make the adequate investment in our system.”

UNC Media Hub is a collection of students in the Hussman School of Media and Journalism who create integrated multimedia packages covering stories from around North Carolina.

Want to Run for Local Office? Here’s How.

Be the first to comment on "N.C. Highway Maintenance is Behind and Won’t Catch Up Anytime Soon"