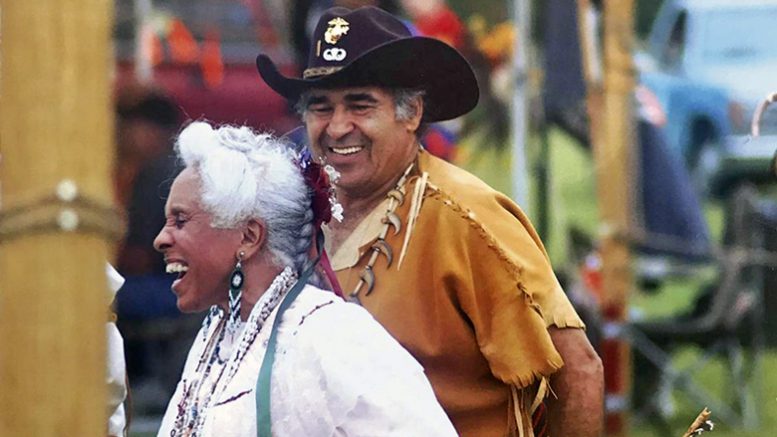 The late Lynette Mildred Coles Jeffries was a strong advocate of the Occaneechi Band of the Saponi Nation and a respected Elder at many Pow wows. She was employed with the Orange County School System for 32 years. Lynette died in 2018.

November is Native American Heritage Month, an opportunity for us to be mindful of our county’s rich history, diverse cultures and the important contributions of our nation’s first people.

The Occaneechi, Haw, and Eno were the first Native Americans, known and or recorded, to live within present-day Orange County. As European surveyors explored the new colony of North Carolina in the early 1700s, a man named John Lawson encountered the Occaneechi tribe while traveling along the Great Trading Path.

Lawson recognized that the Occannechi’s location offered economic and political power, notably in the area of deerskin exchange among the tribes connected by the Trading Path. Archeologists estimate that the Occaneechi inhabited the village between 1680 and 1710. After several concentrated digs, the site was declared as “some of the best preserved and scientifically most significant archeological sites in southeastern North America.”

Today, there are several efforts underway in Orange and Alamance Counties to keep these stories of the Occaneechi alive and preserve the land that belonged to this tribe. In 2018, Occaneechi Village was brought back to life by volunteers. John Blackfeather Jeffries (left) and Krista Reddington (right) tie the thin cedar poles into circular shapes with leather taken from the dismantled village to use as the hut’s ventilation and ceiling structure. Photo: The News of Orange County.

Walking near the Riverwalk in Hillsborough visitors can see this replica site, home to a reconstructed 17th century Occaneechi village on the banks of Eno River, near where the tribe had an actual village 300 years ago. The site was first reconstructed in 2018. One dozen volunteers cleared the area within the palisade wall and were put to work stripping thin cedar poles of their branches to be used for the initial framework of the new huts. To the Occaneechi band of the Saponi Nation, this site serves as a clear reminder of their presence in Hillsborough history.

Sarah Parris, the executive director for the Alliance for Historic Hillsborough, feels showcasing the town’s native history is a necessity.

“For so long Hillsborough history has been shown from the perspective of the colonial white guy,” Parris said. The Alliance for Historic Hillsborough works to demonstrate the town’s history from all points of view, from American Indian, to African American and of historic women.

Yésah is a Tutelo-Saponi word which means “the people.” The yésah formed numerous bands, yet they were one people, united by common ancestors and customs. This exhibit showcases the Occaneechi. It examines the journeys they made over time both physically and culturally, sometimes unnoticed, but always as an integral part of our community. We are indebted to Native Americans for many aspects of our culture today. Some of the food we eat, for instance, is due to their contributions: potatoes, beans, corn, peanuts, pumpkins, tomatoes, squash, peppers, nuts, melons, and sunflower seeds, to name just a few. They also helped the European settlers survive in the New World by sharing their farming methods with them. Countless Native American words have become an everyday part of our language and use. Some of these include barbecue, caribou, chipmunk, woodchuck, hammock, toboggan, skunk, mahogany, and hurricane.

One of the most notable contributions during World War II was the service of the Navajo Code Talkers, a special group of volunteers who did top-secret work using a secret code in Navajo that could not be broken. After moving to Orange County, Laurie Paolicelli (a member of the Redcliff Band of Chippewa Indians, Bayfield Wisconsin), attended several Pow Wows in Hillsborough with her daughter, Cara Paolicelli, also a member of the Wisconsin tribe. Pictured here with the late Lynette Jeffries and her family.

Thanksgiving as a holiday originates from the Native American philosophy of giving without expecting anything in return. In the first celebration of this holiday, the Wampanoag tribe not only provided the food for the feast, but also the teachings of agriculture and hunting (corn, beans, wild rice, and turkey are some specific examples of foods introduced by Native Americans.)

Now, regardless of the origin of the day, many Native Americans will gather with friends and family and use the day to eat good food (many of the classic Thanksgiving dishes are inspired by indigenous foods) and give thanks.

Fall and winter celebrations such as Thanksgiving typically include large gatherings of families and friends, crowded parties, and travel that may put people at increased risk for COVID-19. If you will be hosting a celebration, follow CDC tips for hosting gatherings.

Be the first to comment on "Native American Heritage Month"