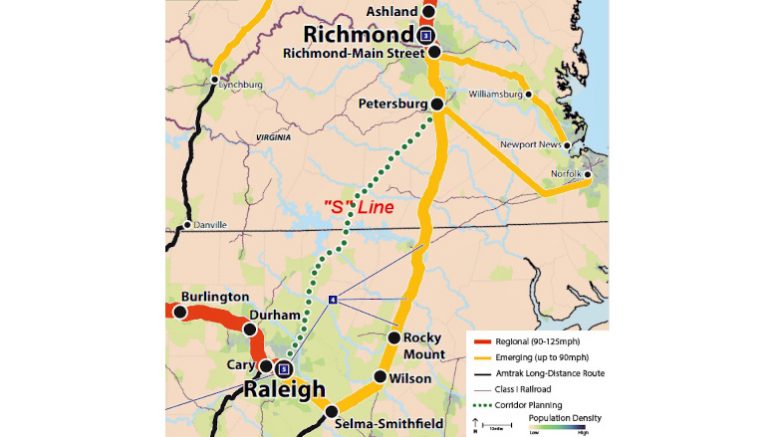 The R2R project will restore passenger service between Raleigh and Richmond through Petersburg, generally following the CSX S-Line, portions which are out of service. The project will upgrade the existing line to the standards necessary for 110 mph trains over the more direct route, reducing travel time by as much as 90 minutes, making it comparable to driving time.

Fast, reliable rail travel through and around the Triangle will reduce congestion on highways, especially Interstate 40. Indeed rebuilding the 162 existing miles of freight track (historically known as the S Line) to passenger standards will include 80 miles of new and upgraded roads.

Importantly, R2R will serve as a backbone for coordinated transit development in around the Triangle, and across the state. There will be upgrades to existing rail stations in Raleigh, Cary and Durham under the Piedmont Improvement Program. There will also be a new rail station in Hillsborough that would be served by Chapel Hill, Carrboro and area transit services. New stations have been proposed on the R2R line from Raleigh to Wake Forest and counties to the northeast.

The development has strong bipartisan backing. David Price, Democrat representing Chapel Hill, and chair of the Transportation, Housing and Urban Development Appropriations Subcommittee, has long been a champion. The project is also supported by Republican Senator Thom Tillis.

Of many rail efficiency and expansion plans around the country, the check to NCDOT is the single largest project funding, and the R2R is among the most advanced developments. The line will come into service in phases over the next five to 10 years.

One key objective for the R2R is to be competitive on time with driving. Raleigh to Richmond by car is 170 miles and about two-and-a-half hours, more with heavy traffic. The current route for passenger trains runs southeast from Raleigh to Selma before turning north through Rocky Mount and on to Petersburg, Virginia and Richmond (see maps). Amtrak’s daily Carolinian is scheduled to depart Raleigh at 10:13 a.m. and arrive in Richmond at 2:11 p.m., a four-hour trip according to the timetable. Early in June, just after the official release of $58 million for the Raleigh-to-Richmond rail project, NCDOT held a community workshop in Wake Forest to help determine the site of a station in that city. In addition to connecting the namesake cities, the line will restore passenger service to communities in between, some for the first time in half a century.

“Timekeeping has been a huge national problem,” Rep. Price told TLR. “The conflict with the freight railroads has to be addressed at a national level, but the Raleigh-to-Richmond corridor will mean fewer conflicts with freight service. It is very direct and will cut about an hour from the current schedule, making it comparable with a car trip.”

Price also noted that the R2R will complement the existing Charlotte to Raleigh service. “With plans for a station in Hillsborough there will be an Orange County link. That will be great access for Chapel Hill.”

As chair of the Transportation, Housing, and Urban Development Appropriations Subcommittee, Price was instrumental in crafting the Consolidated Rail Infrastructure and Safety Improvements Program (CRISI) that has helped to fund some of the rail development in the state so far. The $58 million authorized this year for R2R was funded by the Bipartisan Infrastructure Law.

Train travel time  is often longer because most of the route is owned by freight railroads, and while those carriers are legally obligated to give priority to passenger trains, compliance is chronically poor. The state-owned R2R is more direct, and will separate passenger trains from freight operations, to the benefit of both. Once train travel time is comparable to highway travel, the advantages of being able to work, read, relax, eat and move around are expected to prevail over the demands and limitations of driving.

“The Raleigh to Charlotte route of the Piedmont and Carolinian has been highly successful over the years,” said Jason T. Orthner, rail division director at NCDOT and a member of the Southeast Corridor Commission (SECC). The Carolinian, connecting Charlotte to New York daily, is one of the most successful trains in the country. The R2R is an opportunity to add high-frequency service over a new corridor.”

He added that “Virginia has high frequency service from Richmond to Washington D.C., so the R2R would connect to that. We’ve been working with VDOT, the Virginia Passenger Rail Authority, and the SEC Commission on high-performance, high-frequency passenger service. North Carolina and Virginia have had an excellent partnership in the R2R since the line was first proposed in the early 90s.”

Orthner stressed the local impetus for this project. “In addition to the corridor development work, there have been strong community-led coordination efforts. There is broad regional and local support. Local officials see the line as an economic development opportunity, and we are coordinating with communities and transit services because all transportation comes down to local service. The Hillsborough station is one of those ideas. That idea came up from local proposals.”

It is that intersection of local initiatives and regional development that makes the R2R a solid base in a state where apathy as much as opposition has derailed several passenger-rail proposals.

“R2R supports the vision of tying the state together, urban and rural,” said Orthner. “The federal funding requires a non-federal component, typically 20%, and the whole project will require further federal and state support. But our division competes very well for that support. We have been among the most successful divisions, securing about $330 million over the last few years.”

As the R2R advances, it is important to note that North Carolina is already one of the more successful states in terms of passenger rail operations as well as coordinating with local and regional transit services. Six different Amtrak trains serve 16 communities across the state. The Web site www.ncbytrain.org has a trip-planning tool, as well as schedules and links to connecting local transit systems in each community.

There has been a transit-pass program under which train riders were able to make one free transfer to local systems, but that program has been temporarily suspended.